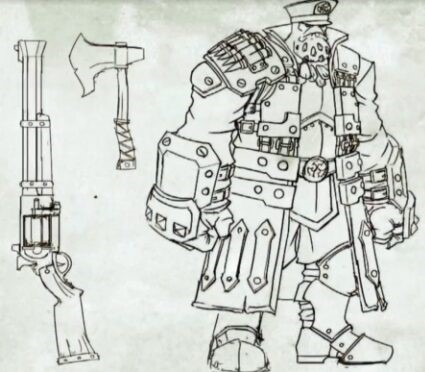 Any number of things - there's no single optimal list. I just grabbed the first of many (many, many) at the 2021 VTC for this. You'll generally see some pretty varied battlegroups, mostly centered around a Bomber, Dozer and Smigg, or both. Likewise, layout can vary drastically - Barrage Teams are omnipresent in some quantity, but you could see a lot of different tech choices - a War Wagon (possibly with Tubbin) for big damage, Dez and Gubbin and Ledfoot and Tredz for some shenanigans, Trollkin Champions for some melee output under Expose and with Foxhole to deliver, Farrow Valkyries for Shield Guard... there's a *lot* of variants right now.

What's its place in the competitive meta?

Staple. This is considered a very intimidating list, and it's hard to deny both the power of its shooting output and the relevance it has to certain meta lists with outs to normal blast-spam. Its output is deceptively consistent, as while individual blasts can go pretty much anywhere, the list has a fair few ways to dial up accuracy.

Basically, it shoots until the opponent stops twitching, and depending on the composition, either follows up with a knockout melee punch from Trollkin Champions, or shoots some more. If you're not careful, your 'caster will get bombs dropped on their head, but there's enough firepower in here to take a commanding attrition position.

Standard gunline problems, really, although there are mitigating factors. If you can make it difficult or risky enough to apply Expose, stacking buffs can work as there's only Brug and maybe Tubbin to buff ranged damage (unless it's some weird Northkin build); sometimes the terrain is just on your side, and scenario is a thing.

EDIT: Today's correction is brought to you by Blake! Not actually a correction, but more of an expansion. Blake correctly pointed out that there's not much in the way of mitigation against line of sight-blocking (Target Acquired, sure, but not much else). If the terrain isn't on your side? Make some. Cloud walls, for example, can be a thing here. Just be wary of stuff running into or past your clouds, and then shooting out of activation - it's an all-in play, so not one likely to be used often, but be careful not to make it viable with a juicy clump.

What are its key pieces?

If it's got a gun, it's important. Seriously though, it depends on comp. Dez and Gubbin are an absolutely terrifying piece here (see below). General Thunderstone Brug does some nice things for the list, but can stay back while doing them. Boomhowler3, if present, is of course a disproportionate threat that should be considered accordingly. Otherwise, standard anti-Trolls tactics; play around the Dhunian Archons and go hard for the Krielstone if a good chance comes up.

What are some key gotchas?

Dez and Gubbin can threaten an absurdly long way in this list, between Marching Orders, Ride Along, and Bring It Down. Beware of having silly-accurate shots laser guided onto your bonce. Any Light Artillery unit can turn into an unholy terror out of nowhere with Bring It Down and Ancillary Attack, so watch out. Reposition (3") on the Feat turn is an unassuming benefit, but sometimes it buys the list another turn of shooting before the engagement, so don't get suckered.

What are its good matchups?

Anything without good shooting defences, and massed infantry. This list can remove a lot of models from the table in one go, and put deceptive amounts of damage onto a range of multi-box targets.

What are its bad matchups?

If you can take out the models with outsized damage output, and have the output of your own to get around Threads of Life, the list has a tendency to fall apart a bit once you actually get stuck in, as it's not tremendously more resilient than any other list. Likewise, stuff with shooting defences that can actually weather Expose, or aggressively apply range reduction effects like Long Shadows or Windstorm, are definitely problems.