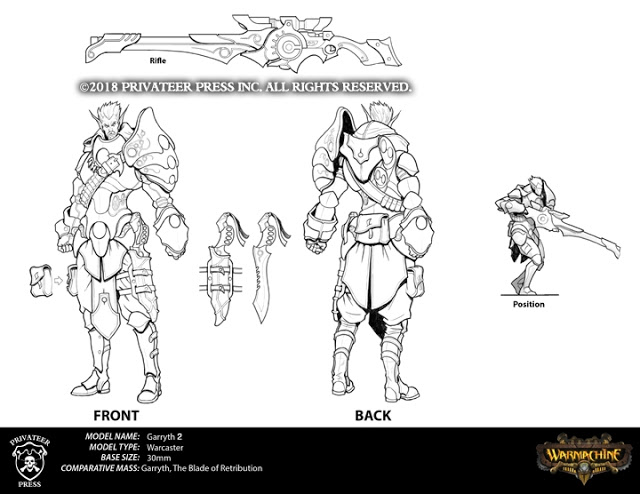 You might see a Phoenix for a heavy melee beater that also lets you get Mortality out from further away, or a Chimera solely for the latter reason. An AFG can make it in to increase the threat range of any Harpy nearby, or a Void Archon might replace the Hermit for a more mobile debuff Solo. If an Archon is present, you might see some Electromancers as a cheap throwaway unit with some nifty shot types.

What’s its place in the competitive meta?

Offlist - there's just too much that can hose mid-POW guns to call it a Staple these days, but it's good into enough stuff that you'll see it taken for coverage.

It essentially plays keep-away. There's a lot of push and slam effects here, and the Feat allows them to go off in the opponent's turn, meaning that getting close to it can feel a bit like roulette. Couple that by tacking Mortality onto a high volume of mid-POW shots, as well as Road to War for threat extension, and we have a list that goes far and shoots hard. Moros gives it a solid assassination option by tagging their Warcaster or Warlock with Paralyze.

It's pretty fragile, so if you can get to it or shoot it back it loses steam quickly. It gets shut down pretty hard by anti-gun tech, as it doesn't really have any tricksy answers for it. As the most efficient way to increase damage output is Mortality, any kind of spell immunity or a list made up of multiple small Units and Solos will be hard to get around.

What are its key pieces?

Moros is a big threat to anything living, and can go a long way, but once the Field boxes are gone it's very easy to cripple. The Ghost Snipers are the main throwaway Solos in the list, as the other ones kind of don't want to be on a flag if they're working to their full potential. Sylys makes it much easier for Garryth2 to cast Mortality from a long way back without having to rely on Witch Mark, and the free upkeep is relevant to the economy.

What are some key gotchas?

Moros threatening 18" to melee (11" charging, 2" for Fleet, 3" for Road to War, 2" for Telekinetic Wave), moving through your models because of Parry and Acrobatics, and putting Paralyze on your Warcaster or Warlock. Tridents slamming you out of melee on Feat turn if you get within 1" of them. A Harpy Thunderbolting you back on Feat turn.

What are its good matchups?

Anything slow-moving without a great deal of anti-gun tech, as well as anything that's fast but has to get into melee to do work, such as Zaal2 or The Devourer's Host.

What are its bad matchups?

Major anti-gun tech, and lists with the stats to just press on through the shooting, such as lists with Windstorm or The Faithful Masses.

Back to Retribution of Scyrah