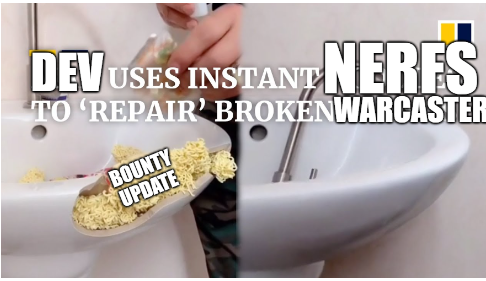 Just a short one – get your happy dances on, because they fixed it all!

Falcir gets an absolutely merciless lamping with the nerf bat, with no fewer than 5 separate hits to her power level that have a real impact on her previously very strong gameplan. She’s no longer crowding out half the stable of Retribution Warcasters and, while still a very good pick that is definitely going to make it into pairings, has been brought much more into line with civilisation and sanity. 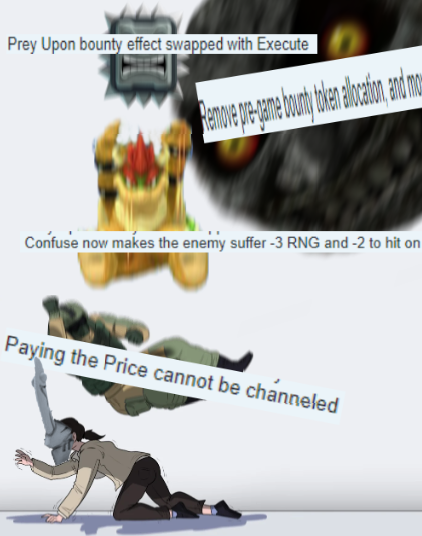 Aelyth no longer enables travel between 20 possible phase states in which Ryssovass are simultaneously alive and dead, which is possibly the world’s first quantum nerf. No longer do I have to consider “how much is this Unit going to piss off the judge” when putting them in my lists, and more importantly they’re not the dominant single wound pick in the Theme any more – while you’re probably going to max out on the boat if you do take them, you might also reach for other options in your other list depending on what you’re going for.

I was honestly expecting round 2 of CI-D3 when this cycle rolled around, and Eiryss3 continues the long-standing tradition of infuriating inconsistency, but with the added meme bonus of working against Infernals, so the people still salty about that get another dose of sweet vindication along with the updated Doomshaper1. She’s probably not been completely sacrificed on the altar of Ambush, but your opponent’ll not be irrationally scared of leaving the middle 4” of the board any more, which is probably a good thing.

Thyron no longer gets to have Mage Hunter Assassins act out a lethal version of that tetherball scene from Shaun of the Dead.

The matchup went significantly better than the scene

Well, the reign of Madrak2 But Probably Better is over, long may it stay in the bin. While this wasn’t, like... aggressively borked, you just knew that it was going to be completely skewy and result in some very negative play experiences while you just sit and take off models in an endless chain because you positioned like an idiot. While the idiot market isn’t a large one, it’s a loud one, and this did have an extremely outsized impact on several prominent lists in a way that probably isn’t healthy for the game. As much as I joke, it’s kinda hard to space around two angry windmills, so this gets windmill slammed into the dustbin of history.

Finally, the Strike Force Commander no longer randomly knocks off your own offensive upkeeps with their entire Unit. Now, you have control, in that you can CRA if you need the shot to hit, but if you want to leave the spell on, you can just not shoot with him. A nice elegant solve, rather than having to update Dispel across a very large number of models.

The speed and depth of changes made here, and the responsiveness to community feedback in general, is a pretty big win as far as I’m concerned. With such a short CID, I said last time that it was important to move quickly and decisively, and I’m really hopeful that with the whole weekend to get some good feedback in, a lot of the less showy models will get picked up for meaningful change. PP have demonstrated that they can do it on the nerf side, and I look forward to seeing them hit their stride on some buffs to even out the underperformers. Future’s looking bright!

Back to Retribution of Scyrah