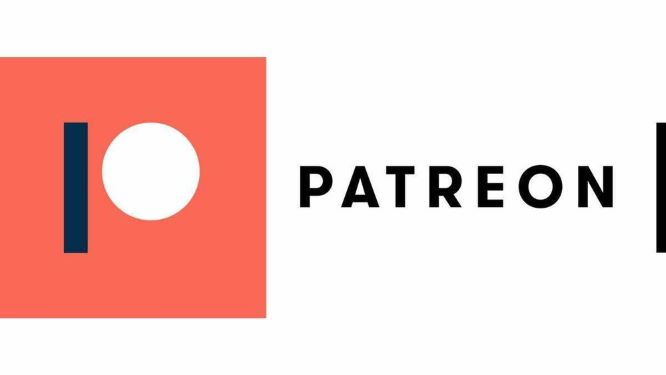 Welcome to the first in an ongoing series funded by our Patreon community! In order to help us fund stuff like site upgrades and an IRL streaming setup, we’ll be taking article requests from Tier 4 backers, to be posted in addition to our regular schedule. This article was requested by Sven Dosch – thanks, Sven! 🙂

I have, at various times, described the Victor as such colorful things as ‘a bad gimmick gun with D3 inefficient Chargers strapped on’ and ‘worse than the Conquest ’. 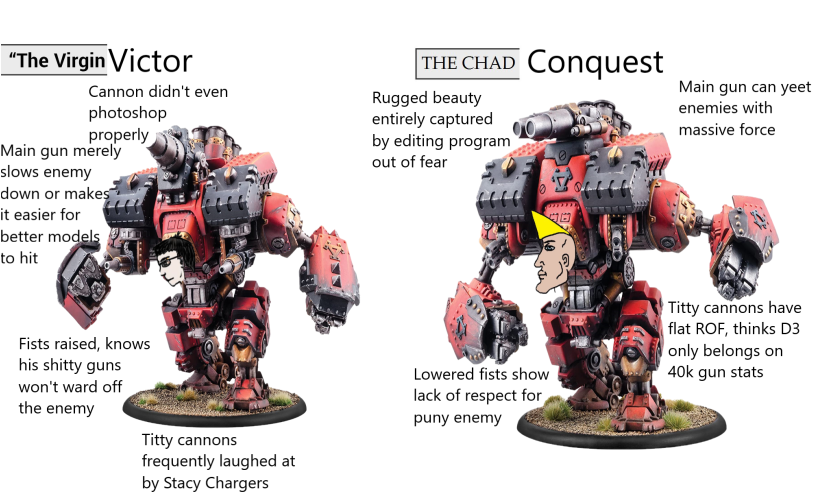 You’ll have to imagine the Chad-dong, because I think shopping one on might lose us our hosting rights

I admit that some of this may have been hyperbole, but I stand by some of it, also. Let’s dive into the card and look at what we’ve got.

Right off the bat, ARM20 and a high box count. This is good. It’s the more durable than most huge bases, and although I don’t necessarily think that’s super important because most things that matter can kill a Victor as easily as anything else, it’s not nothing either. We’re resilient to getting chipped down, which is helpful when playing against guns.


The Unicorn Gun. At RNG20 it has an incredibly intimidating threat, and can get to backline models without exposing itself to much danger. It has some sweet shot types too – Flare is useful for our low-RAT nipple guns (although we have to boost to hit the Flare a lot of the time which burns some of our precious focus), Continuous Fire on an AoE5 is spicy af, and Crater is one of those rules that when it’s good, it’s really good. POW15 is tolerable but isn’t setting the world on fire (apart from the part where it literally sets the world on fire). 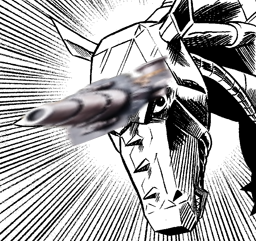 Inb4 next year I’m editing a conversion article where Ben’s made a Victor out of a unicorn -Ed.

The nippleguns are unremarkable, with the dreaded RoF D3, RNG12 and POW12. This is fine, and boosted attacks against models with Flight is very meta-relevant. These stats all take buffs excellently, too. Hand of Fate (from a Vlad , but probably Vlad3 ) fixes some accuracy issues, and a Choir of Menoth (in Warriors of the Old Faith ) means that we suddenly have a POW17 dickhead gun and some POW14 nipple squirters. Not bad, that.


The Victor is cheap, too, which is really really good news. 34 points is a decent price.


The other problem, for me, is the Focus. We can only give it 3. This means that we’re probably boosting to hit on the big gun, and then we have two more boosts, with which we need to secure some hits with our inaccurate nipples, and maybe boost damage because they won’t scratch the paint on big stuff. It’s rough, and I think this is the dealbreaker for me. We just can’t allocate it enough Focus to be able to do efficient work. 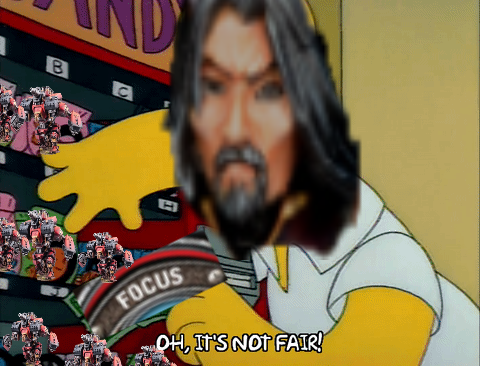 Come on, Focus limit going to 4!

In terms of casters, it’s my general opinion that Colossals in the base Khador themes are mostly not that inspiring. I generally find that I’m uncomfortable playing a Colossal without a second jack, and while Khador heavies are good, we’re either committing to an eye-watering 45 points on a Victor and a Marauder , or accepting that we’re bringing a Berserker chassis, which is fine for scenario concerns but not a great warjack overall. The reason this is a problem is because most of the Khador themes focus on excellent infantry (Wolves of Winter, Armoured Korps), spamming bad infantry (Winter Guard Kommand) or sure are themes that exist (Legion of Steel). Jaws of the Wolf is a thing too, but even then the benefits are mostly lined towards abusing the excellent Khador heavies. This leaves us with two themes that might be of interest: Warriors of the Old Faith, and Flames in the Darkness. 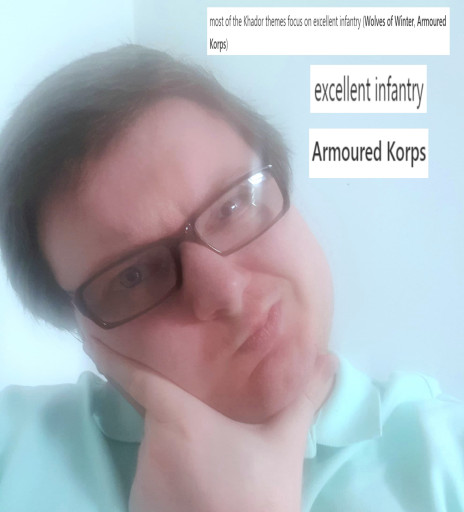 Flame in the Darkness, in my opinion, only has one Khador caster of merit – Zerkova1 . She’s really, really good, but she doesn’t want a Victor. Tune in next week and hear me rave about Zerkova1, who I unequivocally adore, but for now, I’m just going to say that she doesn’t want one and move on. Also, the other Colossals in that theme outshine the Victor. The Galleon is probably a better gun platform, the Hurricane is excellent if flawed, and the Blockader is cheaper and, with the right ‘casters, can be devastatingly aggressive. None of the ‘casters really buff anything the Victor needs buffing, which is another issue. Fiona comes closest, but her Blockader is so good. The theme also suffers from the above issue of having access to many excellent infantry models, and often wanting to skimp on the battlegroup.


Warriors of the Old Faith, on the other hand, is a theme almost tailor-made to have a Colossal. Choir and Initiates. Vassals of Menoth to provide focus if our ‘caster wants to keep it. Menite Archons to make those fire damage rolls spicier. A ‘caster who may have the best support package for it in the game – Vlad3 . Infernal Machine fixes speed. Hand of fate fixes hit and damage. Choir fixes damage even more. It’s honestly a pretty good model in this list. Here’s the problem: The Judicator is in this theme. The Judicator shoots harder, and hits similarly in melee. With the defensive package in Warriors the extra armour and boxes are less important because things that kill you still kill you, and the chip damage will not connect anyway. The Victor still has merits, like the big gimmick gun to threaten the backfield and the nipple guns ability to hunt Archons (except the Dhunian ! -Ed), but in my experience Vlad3 doesn’t have an issue hunting Archons (Infernal Machine Dervishes do it excellently, and, if you want to specialise, a Sanctifier with the same buff is both good at hunting Archons and a really scary assassination piece). 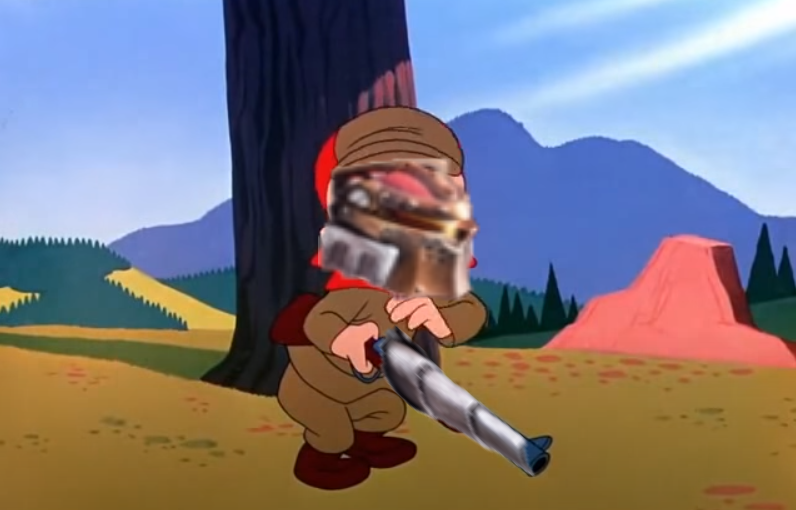 In the comments to this article I will presumably be obliged to resume an argument with Sven and Chris. They’ll say things like ‘the Judicator is bad into infernals’ and ‘the Victor can shoot Marked Souls in the backline’. And they’re right, the Judicator is bad into Infernals. The Victor can shoot Marked Souls in the backline. I dispute that it can do this without dying, but I also absolutely refuse to test this and will only stubbornly shout my opinion at them until they get bored with arguing (We have a rep as ‘annoying English’ to consider -Ed.). I accept that the Judicator is hard to leverage into Flame in the Darkness and a few other matchups, but I think that hard is not the same as impossible, and with Infernal Machine it’s much more intimidating because it’s a threatening model and a credible assassination threat even without Hand of Fate, which the Victor fails to be. I also don’t think that we should be playing Warriors of the Old Faith into Infernals anyway, because Vlad2 is good into Dark Legacy and I’m of the opinion that he should be able to play into Sloan just fine.

It’s worth noting that over the course of writing this I’ve somewhat come around on the Victor . I wouldn’t go so far as to say it’s good, because it’s a RAT4 gun platform and a very inefficient use of focus. It does, however, have access to many buffs that can make it good. The problem is that we can also use these buffs on a model that is good to start with.


And now, to finish up, the glorious end of KnightsCast #4, for your reading/listening pleasure.

Transcript: What the fuck did you just fucking say about the Victor, you little bitch? I’ll have you know it ranks ninth on the list of best Colossals in the game, and it’s been involved in numerous subpar lists in Warriors of the Old Faith, and has some confirmed rules. It’s trained in long range warfare and is the top solo sniper in the entire Khadoran armed forces. You are nothing to it but just another target. It will wipe you the fuck out with imprecise fire the likes of which has never been seen since the pre-buff Judicator, mark my fucking words. You think you can get away with talking shit over the internet? Think again, fucker. As we speak I am contacting my secret network of Kayazy across Immoren and your location is being traced right now so you’d better prepare for the ice, maggot. The ice that wipes out the pathetic little thing you call your tournament record. You’re gonna fucking lose, kid. The victor can get you from anywhere, anytime, and can kill you in over two different ways, and that’s just with its unicorn gun. Not only is it extensively trained in punching things, but it has no weapons and will use its fists to pound your ass so hard that you’ll never be able to keep your shit in again. If only you could have known what righteous retribution your “clever” little comment was about to bring upon you, maybe you would have held your fucking tongue. But you couldn’t, you didn’t, and now you’re paying the price, you goddamn swan. I will shit Continuous Fire all over you and you will drown in it. You’re fucking dead, kiddo..