Typically, Khador lists (especially the original themes) feature slow jacks that either hit hard or are excessively durable (or both) backed up by a varied stable of infantry and warcasters. The infantry themes cover most archetypes from fast, hard hitting troops to a slower brick that matches the jacks.

As a monofaction Khador lacks access to many tricks, and instead finds a place as a ‘stats faction’ – the impressive stuff is, for the most part, contained in the numbers on the card, as opposed to walls of text on the back. One theme in particular subverts this a little, and the new, mixed themes let Khador break the mold and move into basically any style they want.

A wide variety of tools allow Khador to write a few different pairs with excellent coverage. There may not be many Khador models involved in some of these (the mixed themes provide solutions that are somewhat lacking in the base faction), but for people who don’t want to buy into them there’s still a lot of success to be had playing pure Khador.

Cheap boys. Lots of cheap boys. Winter Guard (and Riflemen) look bad on the face of it, but they take buffs well (and there’s a few ways of doing that). The Gun Carriage is a solid battle engine, and with the upcoming steamroller bringing objectives to every scenario we can give two of them Eyeless Sight, which is nice. The artillery pieces are both good for different reasons.

The troops are cheap enough that bringing a bunch of small units and loading them up with rockets makes a fairly tasty gunline, with a bunch of potential Weapon Master shots (albeit at RAT5).

Now, onto the bad. The inherent problem with Winter Guard Command is that the buffs we can give these idiots just aren’t enough any more, and basically everything in the meta is pretty happy to just mulch DEF12 morons all day long, meaning that while the list looks scary on paper the things that are already good can for the most part trivially handle it.

Vlad1 can make a pretty tasty gunline using rockets, battle engines and Signs and Portents, and his feat rewards you for bringing a handful of the good cheap ‘jacks to push up/buy time/threaten big targets that try to rush you out (Marauders/Juggernauts).

Irusk2 is a perennial favourite in Winter Guard Command.  Solid Ground and his  Tough aura make Winter Guard somewhat sticky with blast damage immunity and  Steady (although I doubt it’s enough, really), and with  Battle Lust they start to push some serious melee damage. His feat is generically good, too, which is nice.

Butcher3 certainly appreciates  Sacrificial Pawn to get there, but he brings no support for a very support-needy list, meaning that he will have to do a lot of lifting himself. He can, but when it’s just him it can be positioned around.

Look, Iron Fangs have some good things on paper. POW13 base is pretty solid, Critical Knockdown is nice. The theme giving the Great Bears / other hard hitting solos Countercharge is pretty sweet with Tactician from Markov, and Uhlans are just a good unit.

The problem with this is that we can’t spend all our points on Uhlans (and if we wanted to there would be a better place to do this), and the infantry has an abysmal defensive profile (even in Shield Wall, ARM18 boys just ain’t cutting it any more).

The theme’s had its moments, but it’s been crept pretty hard and its whole schtick (apart from the Countercharge, which is nice but not enough to justify blowing the dust off your carefully brass-rodded Pikemen) of being a swarm of semi-elite infantry is just done better by some of the shiney new themes. Not bad, but not good enough.

Zerkova1 was a favourite here, with Freezing Mist shielding a block of dudes with some punchy Countercharge threats, regular Iron Fang Pikemen for the mini-feat speed to jam out with her excellent feat and ‘jacks/ Uhlans to back it up. Again, there’s stuff we’ll talk about later that do this better.

Strakhov2 is maybe just something I’m nostalgic for, because a teammate of mine took this to WTC two years ago and did pretty well.  Last Stand makes the pikes hit disgustingly hard, and his feat makes them hard to shift.  Quicken is good for delivery, but they’re still far overpriced, and the list just ends up not getting enough stuff to win tight games.

Jaws of the Wolf

The obligatory ‘jack theme. Look, Khador have some excellent ‘jacks. The Juggernaut is a brilliant combat ‘jack, while the Marauder is a nice budget beatstick. The meta cracks armour trivially now, but the Devastator is still good, and universal Pathfinder is a phenomenal theme benefit.

Both the Jr. Warcasters, Sorscha0 and Malekov1 bring their own threat extension, one of which is splashable, but the rest of the solo selection is a bit insipid ( Forge Seers are nice, but the Widowmaker Marksmen / Manhunters are both pretty average).

Free Kayazy Eliminators , however, is pretty hot. They can contest stuff your clunkers cant reach, hit unreasonably hard and be a pain to kill. The main problem is that so many things that are just naturally good right now hit like a truck, meaning that the once scary ARM skew you could bring in Jaws is much less scary now. Not that it’s not good any more, but it’s hard to justify in a pair now. 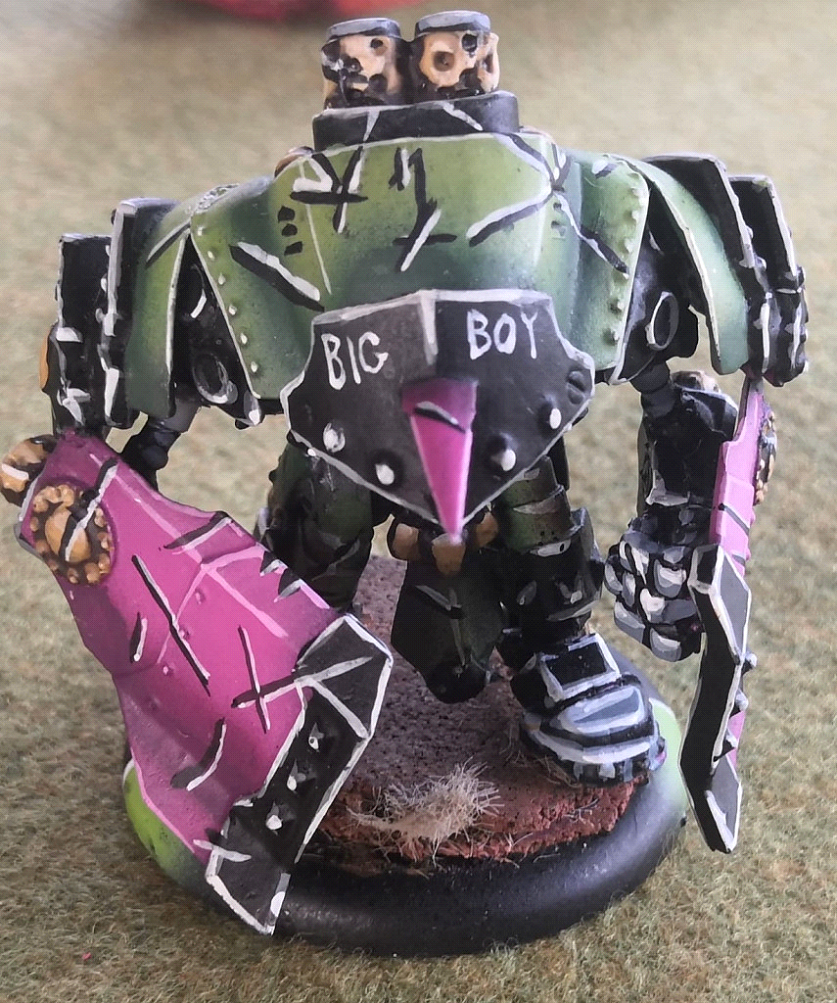 “Yay, Ben still thinks that my armour stat matters! I saw what happened to Maelok , so I was getting worried…”

Karchev has been the poster boy for Jaws ever since Chris Davies won WMW with his Mad Dog list. He’s still the king, although there’s few Mad Dogs now and more Marauders / Devastors / Juggernauts . The Adjunct lets him inherently solve for clouds and magic weapons without needing to marshal something to a Forge Seer , although you probably want a couple anyway for focus efficiency. He gets far too many Warjack Points and with Sorscha0 has a scary +5″ threat extension, or alternatively Battle Charged making him hard to alpha.

Butcher3 makes good use of the jacks as secondary threats and blocking pieces to deliver him.  Energizer makes them faster, and Sorscha0 makes him faster which is pretty neato. He doesn’t have much support beyond this, but the jacks are inherently much scarier than Winter Guard, and the delivery works almost as well (blocking/screening vs  Sacrificial Pawn). 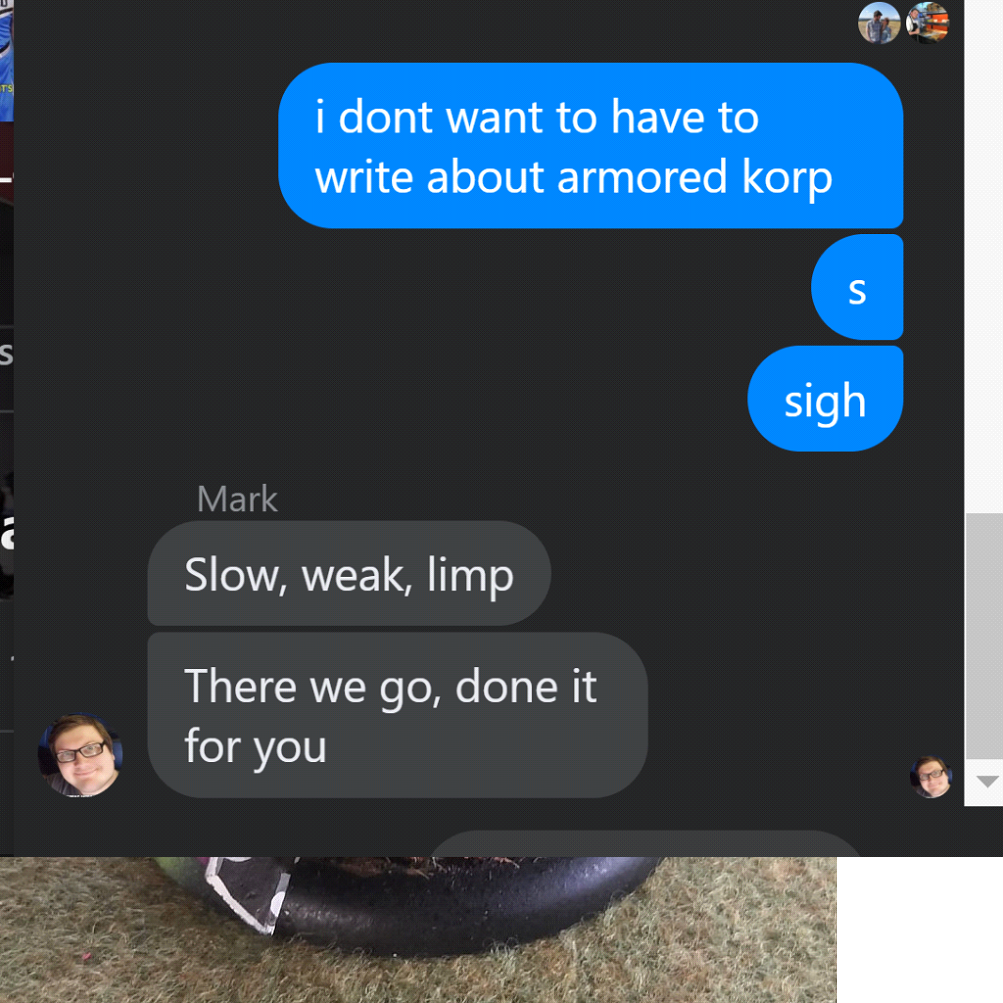 If Ben had left it at this, it would have been much easier to edit – Ed.

Ok. Armored Korps is slow, but makes up for it with  Advanced Move. The problem is that the things that are good are very pricey, meaning that you end up with a list that’s smaller than it should be.

The boys pay a lot for defensive stats but at SPD4 (even with  Desperate Pace to get +2” of movement) you have to expect to get alpha’d. The problem comes when you realise that you’re just not tanky enough to do that, and even if you don’t the stuff doesn’t really hit all that hard so you often can’t kill enough.

Demo Corps are an excellent unit (with UA ), Bombardiers have a solid gun and Shocktroopers sure do exist, albeit in a usually ineffective fashion where they get charged, die, and if they don’t die are engaged so can only kinda weakly flop back. The theme is great at fighting single wound infantry that doesn’t hit that hard but, really, who’s bringing that to the table in 2020?

The Tankers are good ( Suppression especially) and Drakhuns might be if they weren’t 9(!) points. Atanas is overpriced for what he does (buff a bit, get shot, die), and the Chariots , while cheap, are both pretty mediocre (one gun in a meta that’s full of shield guards hmmmm). Still, it looks cool on the table.

Vlad2 likes high value boys for his feat, but these boys are not the best boys. Tankers/ Demo Corps can actually survive stuff with a Vlad2 feat, which is nice, and  Hand of Fate is good on Tanker/Chariot guns. He’s also just a phenomenal caster in general, so the list can’t be that bad with him.

Ah, onto the good stuff. Fast, Advance Deploying boys that are cheap and hit hard. Good support solos help this list do what it wants to do better, access to multiple Archons without needing to use the Merc slot.

Wolves is an excellent theme, and Doom Reavers , while not the terror they once were thanks to an upshoot in stuff that can handle SWI pretty well, are still very good and worthy of a place in a pairing. Even the Merc solos compliment it – Hermit is good here as he is everywhere, protecting crucial Kolduns or Greylord Escorts , and being annoying, and Alexia2 appreciates the volume of souls to make even more weapon masters.

The Koldun Lord is absolutely the best model in this theme, btw. Never don’t have two. The sweet spot for Doomies is probably four units, because you can still get two Archons and have room to fiddle for a meaningful battlegroup, enough Ternions and Kolduns and an Adjuncts if you’re playing the wrong caster, but five is a solid overload if you wanna cut back on support, and I can see arguments for three with a merc unit.

They threat 13″ off the AD line (more with certain casters), which is over halfway if going second, so your opponent has to think about your threat every turn. Gotta go fast, baby.

Vlad2 is categorically the best caster in Khador, and this is his best theme. There are other good casters here, but Vlad's ridiculous toolbox lets him pick up matchups that they can only dream of, and his feat creates an insane amount of pressure when you can threaten to throw Doomies 16” up the table. Hand of Fate is probably a trap, but you can definitely get a Grolar in if you want (you sadly need two ‘jacks for the current scenarios, so the Conquest is out. And the Victor is always out, because it’s ass). The list kinda writes itself (I’ll post it at the bottom) in my opinion, but there’s a few choices you can make. He’s also categorically the worst matchup Infernals have in the entire game, which is nice.

Sorscha1 loves this theme. It has an Adjunct , and multiple sources of Puppet Master. She gives the Doom Reavers concealment for DEF15 at range, and a protect them a bit (either from a round of shooting or some reprisal), and the combination of feat and apparating Doomies is credible assassination pressure. She struggles in a few key matchups (Infernals), but is still pretty solid, although I worry that even with Dark Shroud and Brittle Frost the list may be a little pillow fisted overall.

Old Witch2 stops these DEF13 idiots getting shot. That’s about all she does for them, but it’s not a bad trick in and of itself. The theme’s main weakness is a high volume of small arms fire, and Witch gets around that, but lack of a consistent non-Ice Cage hit buff is problematic, and again she’ll struggle with Infernals (that Desolator scather, and its sprays, are a big deal and we’re not dealing with either of these things, sadly), but if you’re not dropping Doomies into that and just want to stop getting shot (I get it, believe me) then Witch2 is your girl.

That’s it for our OG themes! You’ll have noticed that while nothing here is explicitly bad, nothing outside of Wolves of Winter is particularly exciting.

I’ll offer some list ideas and thoughts on the pairing in the next part of this article, when I cover Warriors of the Old Faith and Flames in the Darkness.

For now, though, that’s it!  See you next week, when part 2 of this Khador overview will drop.