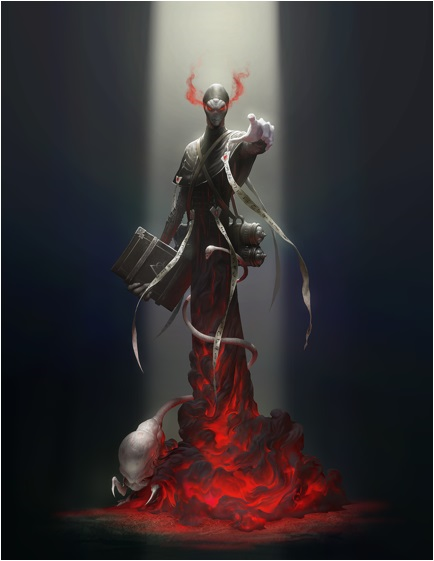 So, it’s your first time into Infernals, and you foolishly asked to ‘learn the hard way’ when your opponent asked how you wanted to play the game. They put down a spindly-looking creature who seems very interested in showing you some paperwork, and when you read through the card it just seems to look a bit like a Cryx caster with some iffy defensive stats, so you’re surprised when you see it at the front of your opponent’s army. You plough on through your turn 1 unpack, and then suddenly your opponent kills half their own support, rolls dice seemingly as many times as they want until they see the result they fancy, and tells you your caster’s dead.


So, let’s rewind a bit. What can we do to stop this dice-rolling monster from binning our caster before we’ve had a chance to actually do anything? The answer takes a lot of explaining, but don’t worry; while there may be a lot of words below, the solutions are all applicable to whatever caster you’re playing, and several of the problems have overlapping answers. I’m going to assume a basic level of familiarity with the Infernals faction to avoid this article being 600 miles long (which is what it was before I made that assumption, so if you need to brush up, the card library is your friend!). 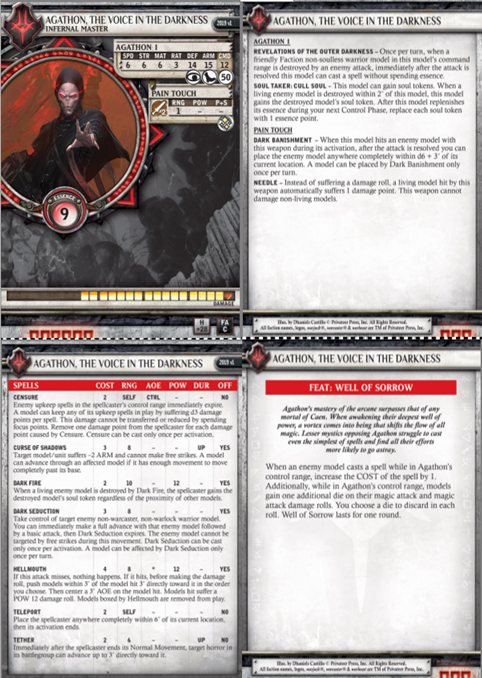 I’ve even saved you half the work by providing Agathon ’s card!

So right off the bat there are three ways that Agathon can realistically assassinate you. In order of practicality of application, they are:

-Throwing spells at you until your face melts, ideally with feat up and rerolls aplenty

- Dark Banishment placing you into the centre of their army, which then eats you


In this article, we’re going to cover the first of those methods, the famed spell assassination. Interestingly, it’s arguably the least threatening of the three in terms of outright lethality, but the hardest to avoid in principle, as Foreboders extend the Dark Fire threat range to 24” (with the cheeky option to use Hellmouth to push them even further forwards, and Agathon camping, say, 7 transfers can place themselves pretty aggressively far forward, so that charging and spellcasting becomes a respectable threat in of itself. So while it’s possible to simply be out of range altogether, it’s not particularly easy, and we’d presumably like our caster to be relevant in the game. The exception to this is bottom of 1 – if your caster is mobile enough to get out by the end of bottom of 2 without compromising their activation hugely, there’s no shame in killboxing yourself. The rule doesn’t trigger on bottom of 1 for a reason!

Thus, we’re going to try and put a hard stop on this assassination altogether. Firstly, outright spell denial works a charm. A safe source of Arcane Vortex (as in, one that can’t be killed before the start of Agathon ’s activation) can halt a lot of the power of the assassination to punch through stacked focus or transfers. Banishing Ward and similar spell immunity effects rule out any kind of spell assassination bar for Hellmouth targeting a nearby model to drag your caster into the AOE, so while you’ll still have to be wary of dying to two boosted POW12s with rerolls and the feat, it’s for sure a mostly-solid solution to this variety of run. Anti-channelling effects like Castigate are rarer to be sure, but limit the available vectors to those provided by Agathon .

Returning to Foreboders , they have to be physically able to see your caster in a position where they’re unengaged. Flight and Eyeless Sight go a long way to mitigating against terrain, but they don’t let you see 3” through a forest (sorry Mk2 Legion players!) or through a building, nor do they allow you to ignore intervening models and being engaged when arcing. As such, using terrain, body blocking with models (especially when they have spell targeting immunity, but if not, beware of Hellmouth, and Dark Seduction moving them out of the way), and simply making it so that the Foreboder can’t be unengaged when it gets to arcing range, either through putting models in a screen so that all the areas 10” from your caster that the Foreboder can reach are going to lead to it being engaged, or through interrupts like models with Countercharge. Worth noting though that the rest of Agathon ’s army exists, and that Agathon itself can potentially be the source of spells, so bodyblocking isn’t a sure-fire method, but at the very least it adds complexity to the assassination run and increases the chance of the Agathon player making an error that you can exploit.

However, it’s entirely possible that our list and/or table aren’t conducive to executing any of these strategies. As such, what we should try and do at this point is minimise risk to the point where the Agathon player thinks ‘hmm… is this worth going for?’, because Infernals players are human too (shocking, I know!), and make decisions on the basis of perceived risk relative to perceived reward. If it’s the early turns of the game and you’re only offering a 20%er, most players aren’t necessarily going for that. Late game it’s potentially a different story, but it’s all about judging when your opponent’s mindset will shift – which is a lengthy topic in of itself that I’ll try and cover in future. For now, let’s focus on how we minimise the risk, rather than at what point your opponent makes decisions.

Firstly, don’t allow things to become worse for you. Don’t let hermit get you in Master of Ruin (a 15” threat from a mostly backline solo and requiring the Gate place to get so far at that, so fairly avoidable), don’t let a Desolator spray you (a fair bit harder to avoid, because of Assault, and, again, the Gate ’s placement ability, but not inherently impossible, especially with a screen 8” away like we discussed with Foreboders earlier), Regna getting a Dark Seduction off so that one of your hard-hitting models decides to whack your caster, etc. Basically, all the typical caster screening that you would do in a normal game comes in here, to avoid the army proper putting some chip damage on you to soften you up. Secondly, the more components of the run that you can pick off, or force them to summon with before you allow them to go for it, the better. That means trying to get rid of or force a summon with Roget , Eilish1 or Eilish2 , Hermit , Orin2 , and the Treasure Chest objective (for now!). This is very hard to do against a seasoned Infernals player, but if the opportunity arises and failure won’t cost you the game, go for it!

Then, finally, we come to the raw numbers on the assassination itself – below is a very intimidating load of maths courtesy of Will Cruickshanks, displaying the probabilities of landing various rolls with the dice fixers that Agathon has access to. 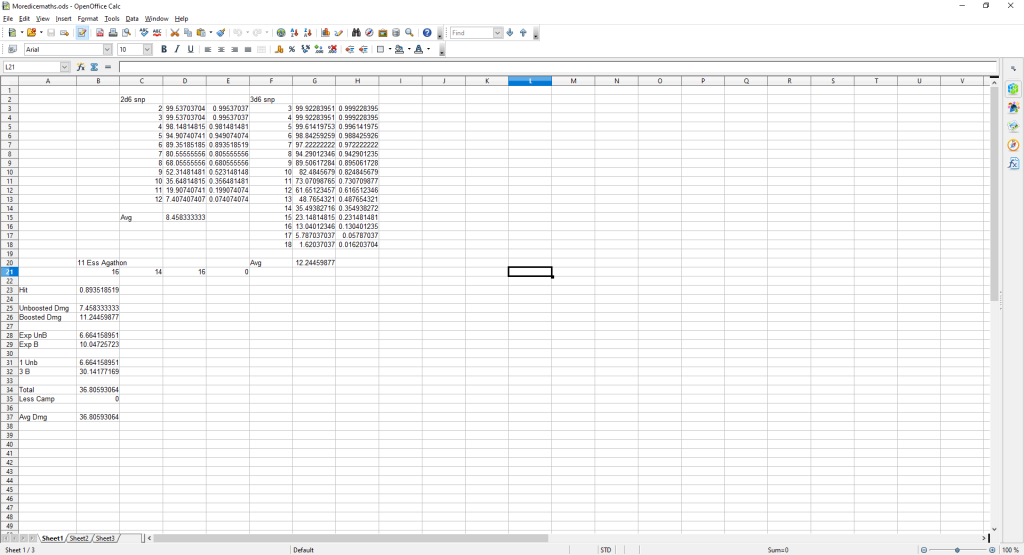 Thanks, Billy! May a thousand Cygnaran tears be shed in your honour. #cygnardelendaest

It’s… very complicated, but if numbers like that make your eyes glaze over, the key takeaways are that:

A roll of 10 to hit on 2d6 with the feat and a reroll is broadly equal odds to rolling a 7 on 2d6 with no added effects.

Big numbers get really probable on 3d6 in general really fast, especially with multiple rerolls available. For example, with two rerolls ( Orin2 ’s Knowledge of the Damned and Puppet Master), a 3d6 14 is roughly 75%, and a 15 is about as probable as a 2d6 7 with no buffs.

Agathon does not like having to boost to hit – it’s fairly inefficient, and every essence spent on hitting as opposed to not hitting means lower expected damage from the spells that do hit. A DEF15 caster behind a wall (again, beware Hellmouth dragging you away from it) effectively has an extra transfer compared to the regular kill.

Do not let Agathon hoover up stray souls! Either keep them safe with an Archon or Direct Spirits model, keep them back, or make Agathon trade a node for them so that at least the number of angles is reduced. The worst thing you can do is let Agathon summon, pick up 3 souls, and Teleport back to safety with a transfer, because the odds of your survival shift massively at that point.

If all else fails, just camp. At the end of the day, it’s just POW12s, so if you’re high enough armour or can transfer every hit you’ll make it riskier.

Thanks for reading – the next part of the series will cover the heavy horror missile, and should be out next week. Hopefully the above helps people deal with the most common Agathon assassination!