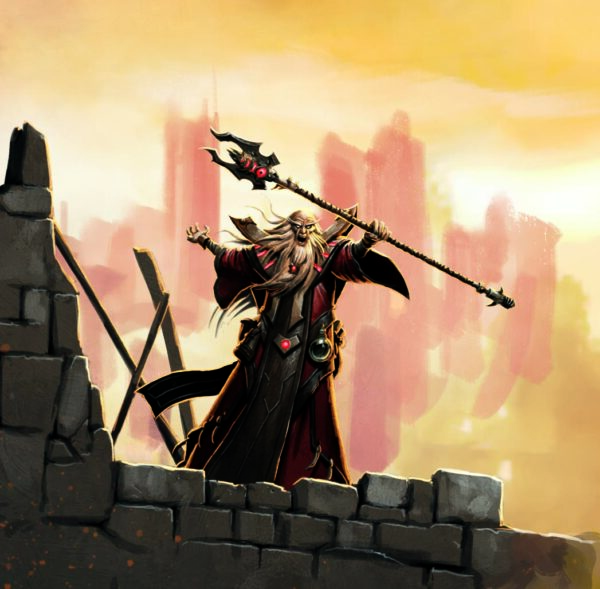 Hello again! The feedback I got from the Regna user guide was that people enjoyed the in-depth explainer and the look into decision-making, so here is another article in the same style about our favourite reroll engine, Master Preceptor Orin Midwinter ! Orin2 , for his points, is definitely one of the better Marked Soul options that we have access to. His toolkit, between Arcane Vortex, Knowledge of the Damned, and Annihilation, besides his other supplementary rules, is really very good, and provides a lot of stuff that we don’t generally have a huge amount of trivial access to in the faction otherwise. Annihilation being able to remove Constructs and Undead from play is pretty big, as the most freely available form of RFP in faction is Snacking on the Tormentor , which only works on living models. Arcane Vortex, only available on the otherwise more expensive Orin1 , is really, really big in a lot of matchups, and Knowledge of the Damned can be absolutely game-winning when you need a key roll (or five) to succeed.

Let’s start with how we get best use out of this utility piece. First off, we take a maximum unit of Cultists to attach him to, no questions asked. I’ve tried putting him on a minimum unit before, to stop myself getting carried away, and it’s just suboptimal. I’ve even thrown an extra Dark Sentinel (heresy, I know) onto the unit when I have 2 spare points in some weird lists just to make sure that Orin2 gets to have enough souls in the tank that using them liberally doesn’t punish me that much. However, there’s a configuration that I often see floating around with newer or more casual Infernals players that I’d like to briefly talk about; namely, spending a Requisition Point on 3 Dark Sentinels for the unit. Look, leaving aside what I think about Dark Sentinels as a selection (which you can hear all about in KnightsCast #3!), this just isn’t an efficient use of points for what you’re getting. In the usual exchange rate of Requisition Points to actual points, the opportunity cost of the 3 Dark Sentinels is usually equivalent to a Runewood2 or an Eilish2 ; basically some 5 point option or other. Now given that you’re very likely to be ramming in every Marked Soul that you can, because you’re an Infernals player and Summoning is what your faction is built around, the 5 points could be spent on 4 Cultists, which while it denies you three potential souls, gets you enough Essence economy that you don’t have to make as many hard decisions about killing Orin2 ’s unit for souls. 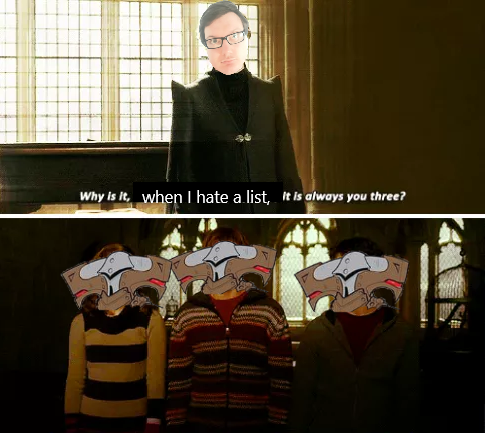 This is the article image that I’ve had the most fun making so far, by a long way

So, let’s get straight into actually using Orin2 on the table. First off, and I cannot stress this enough, get into the habit of keeping his Cultists away from your Infernal Gate! Soul Taker: Shepherd does not override proximity, and having the Gate collect their souls instead of the intended recipient is very upsetting (though quite thematic). This can be quite difficult, as Orin2 ’s unit tends to stay pretty far back for most of the game, just handing out Essence and occasionally letting your Master or another key model reroll things. Don’t get me wrong, there are times when you go pretty aggro with him, but generally speaking those plays are either winning you the game (for example, getting rerolls in a key place for an assassination or scenario win), or Orin2 is being used for a Summon in your Master’s next activation, because he’s a very weedy boi and will not survive frontlining particularly well. However, when in the back line, Self Sacrifice is generally more than enough to keep him safe from the things that can actually get to him, so you don’t need to put a super large effort into keeping him safe.

Sometimes you’ll want to get a bit aggressive and use Annihilation on things, which is understandable, because it’s a very good spell, but I would generally refrain from doing so unless in dire need – sometimes things go wrong and you do it, but outside of circumstances where you need a model dead to not lose or you absolutely positively have to Remove From Play such as with the Abidans of the world (and can’t do it with Regna ’s Hellfire), I’d recommend that you don’t try and use his combat abilities (including Gang, even though it’s nice to clonk things with a POW13 old man stick). However, I’d advise against keeping him super far back, because while it will keep him completely unthreatened you generally want to be able to apply Knowledge of the Damned in a pinch, but given that the effective range of that ability is 20” without the Gate ’s Infernal Portal place effect it’s not super hard to get it off in most cases. As a rule, I’d recommend spending a bit of time asking about maximum threat ranges rather than just keeping him uber-safe like you would with more mobile Marked Souls (both varieties of Eilish spring to mind as examples of this other category). 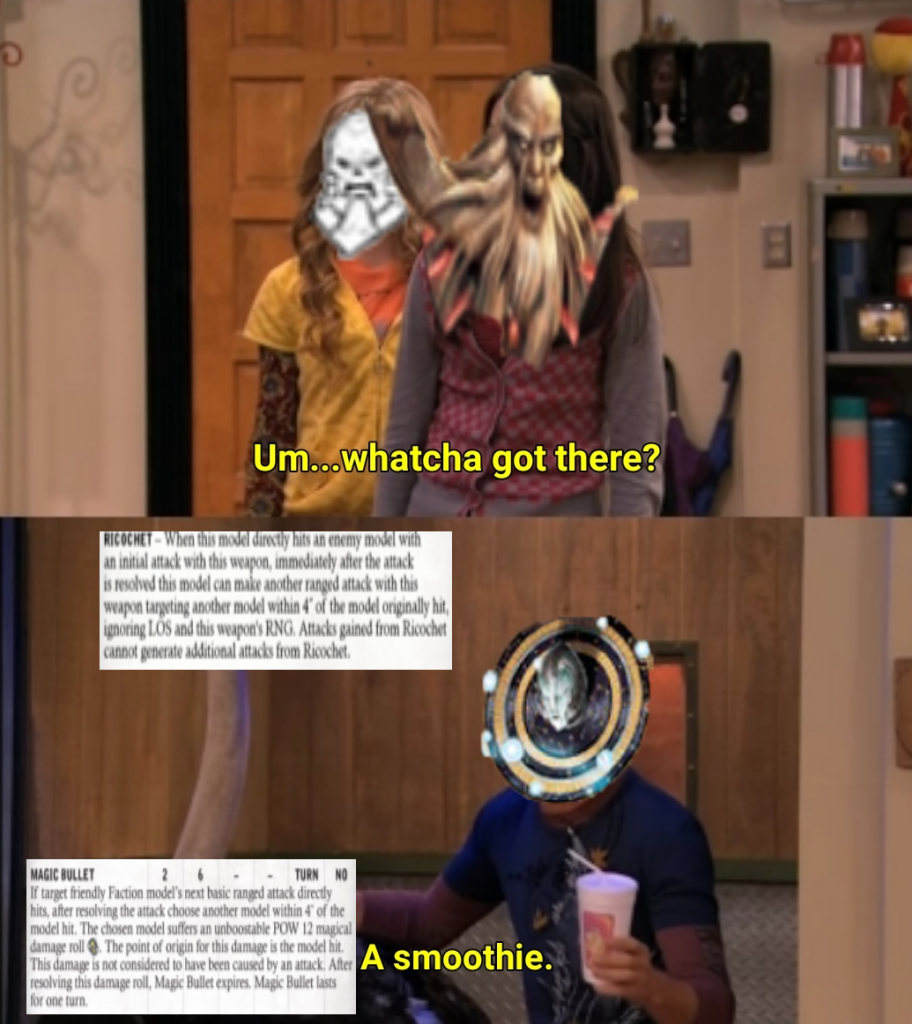 There’s one exception to this style of playing Orin2 that I want to briefly talk about – namely, the times when you need Arcane Vortex. At those times, basically what you do is ram as many souls as you need to block off anything your opponent can do (don’t be conservative here; you should always assume that your opponent is more knowledgeable than you, so whatever you let them get through may be used against you in a way you don’t foresee), make sure you have the rest of the unit as potential Self Sacrifice targets, and then screen him as well as humanly possible with all of your heavy Horrors. Now, you may feel like it’s an overinvestment, but when you’re in a matchup like, say, Haley2 or Fiona , both common meta drops into Infernals tournament pairings, you’ll be really sad if your brick starts getting picked to pieces by, say, Telekinesis or Befuddle. Basically, this is one of the times where you throw typical Infernals conservativism out of the window and blow a lot of your resources early, because our goal is to get to the endgame, and once we have enough heavy Horrors on the board we have a more realistic chance of doing that without caring too much about the loss of one or two heavies to silly spell shenanigans.

Finally, we come to the reason I chose Orin2 as the next one in this series. I’ve recently caught a little bit of flack in some places for saying that I often Sacrifice Orin2 pretty early on in the game – and in the very first turn, no less. Now, I’m well aware of just how powerful an ability Knowledge of the Damned is, and in several of my past games he’s been a Turn 5 Summon at the earliest. However, as I’ve thought more and more about my lists and my choices turn-by-turn, I’ve realised that because I don’t really run a huge amount of Cultists these days (typically a maximum and a minimum unit), it’s kind of a misuse of valuable resources to kill them for that or Arcane Vortex. So if I don’t absolutely need those rerolls (for example, having three attempts at hitting a key Dark Seduction, or generally nailing some other key high-DEF piece like a Morrowan Archon ), or need Arcane Vortex for the matchups we talked about earlier, it’s not uncommon that Orin2 gets unceremoniously gribblified.

It’s a hard life in the Infernals army; If we lived in a perfect world, it wouldn’t be such a binary between Summoning with him either very late or very early, but because of the fact that he comes with a unit that needs to do things that aren’t “run into optimal Summon position” like our other Marked Soul options, what we want to do is minimise the disruption to our future turns. Early on in the game, we have at least one other Cultist unit that can fill up our freshly Summoned heavy Horror, and all our other Horrors are full on Essence anyway, but around turn 2 and especially 3 you might want to completely refill a Horror while Sacrificing Orin2 in a different position. It’s not impossible to do – sometimes, if you can pull off a really good stall game, or you’re making a Tormentor that can just sit back and play zone defence/ Countercharge bot for a turn, it can happen, and I’ve had both of those situations come up – but it’s often not conducive to optimal play in common competitive matchups, and… frankly sometimes it takes a while to think about your turn when you do it, and Infernals are complicated enough as it is. 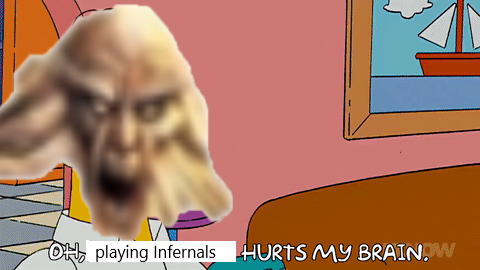 Bit of a shorter one this week, but Orin2 ’s a lot less effort to get full use out of than Regna for sure! No promises, but the next article I write will hopefully be the long-awaited Flame in the Darkness discussion; if it isn’t, then you’re likely to be getting an article on my passion project of Gastone2 in Hearts of Darkness. Until then, happy gaming!