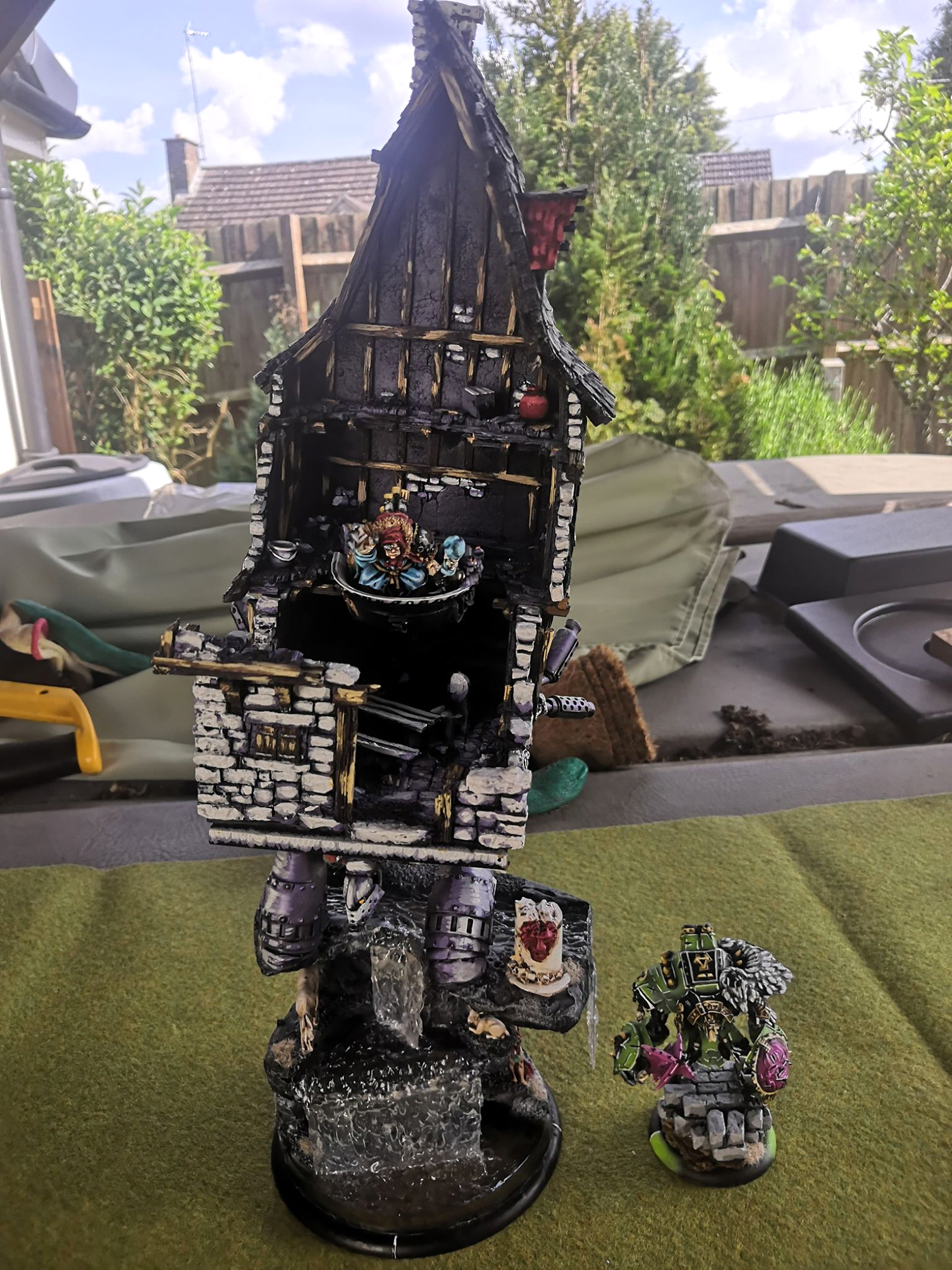 This was meant to be the second of a three part series on Khador, and I promise that when I write that it’ll be really good and you’ll all text your parents and be like “Hey, you have to read this dope article, it’s totally transformative and changed my view on the world forever” and they’ll be like “shut up Kyle, no-one cares about the Motherland”.

But, instead of that, I’m writing this. So it goes. I built this model for WTC 2018 and she’s still the silliest project I’ve done, although actually really easy to transport (even fly). I’ll break this up into a few stages, roughly in the order that I did them.

I think the original Old Witch3’s house is puny, so I wanted to give her a bigger house to befit her stature. After some shopping around, I found this one: 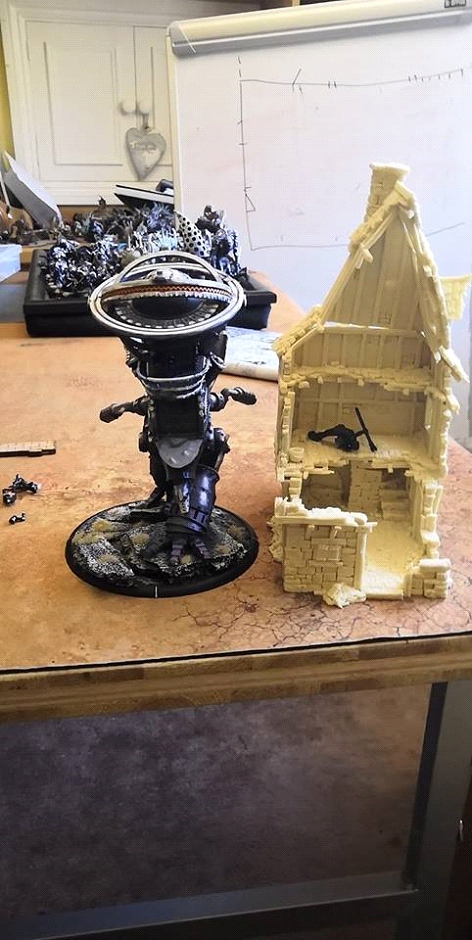 In the back, the iconic Knights whiteboard, which to this day preserves our most dear tech

As you can see, it’s pretty large. It’s pretty heavy, too, which meant that my original plan of building her some big spider legs was out, because I didn’t think I’d be able to make them hold the weight.

I sadly didn’t save photos of my concept sketches, but they mostly focused on the base and where the feet attached, because while I was starting the project in May I needed to have my original Old Witch3 still functioning until mid-August, so that was all I could work on.

I did a mockup of my vague sketch of the model and the original base sketch and it was a little over 2 feet, so I revised to a much more reasonable 18 inches and got cracking.

There were a few constraints:

⦁ I needed a model I could transport, and, crucially, fly without damage.

⦁ I needed something that I could actually use, so it had to be able to lose the house and leave a model not much taller than the original.

⦁ I needed to use my original model in a tournament in mid August, and have the replacement for a different tournament two weeks later. I picked this because it was my biggest window, and gave me a lot of time for the base, which was the most complicated thing I did anyway. It still wasn’t long, and you’ll be able to see I cut a few corners on the model and painting.

The basic (geddit?) (god I hate you -Ed) idea was to build something with multiple tiers, use some water effects to create a sort of cascading waterfall, and include a few scenic elements.

I had an image in my head of a deer drinking from a serene pool on the level below Witch, and on the bottom I wanted to use a waterfall to hide a little scene behind.

I had the woman from a spare Witchwood for this, and I intended to use a Kell Bailoch model as her prey but I lost him at some point and just went without. Witch herself was standing on a river, with a fall from the side coming to the pool and water also falling from the ends into nothing.

For the building of the base itself, I had a lot of cork lying around which I could use to give it bulk, and I took a trip to my local model railway store to buy some modeling mortar to build up the rest.

Its easy to use, dries fairly fast and is easily sandable after which means you can shape it nicely, including creating the sloped pool and riverbank. I built the columns up out of cork stacked with a pin through the middle, and the non-bottom levels were built onto pre-cut plasticard.

For stuff I’ll get into later, I also used some pouring resin, a 2-part Crystal Resin made by Gedeo, a few clean PP blisters to cut up, as well as a larger piece of clear plastic from somewhere, and some Vallejo sculptable water effect: 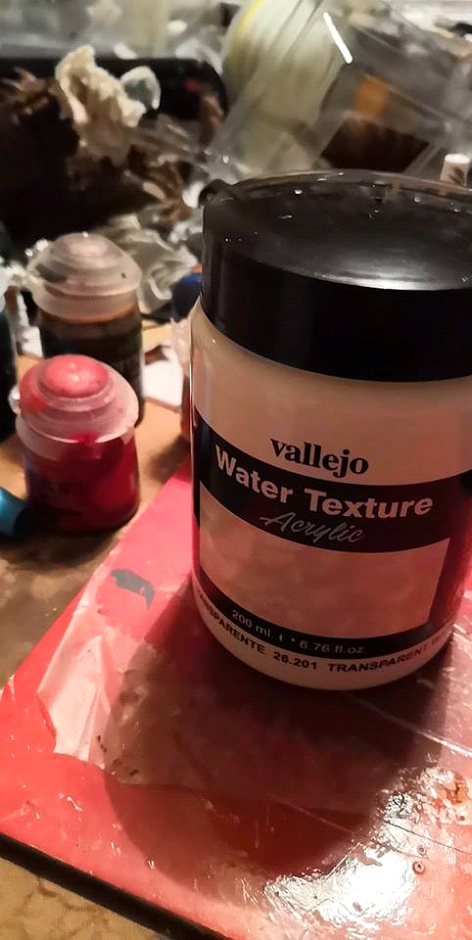 The build of the base was pretty easy, and went as follows: 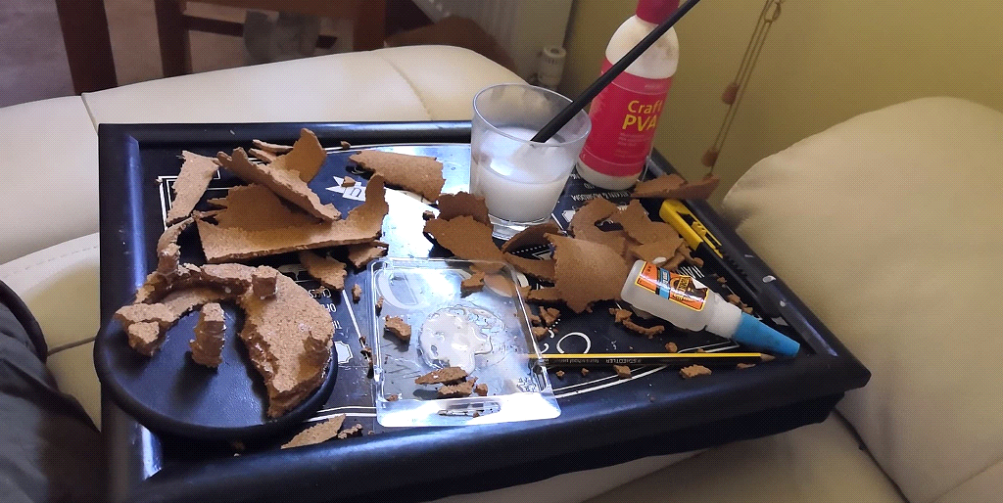 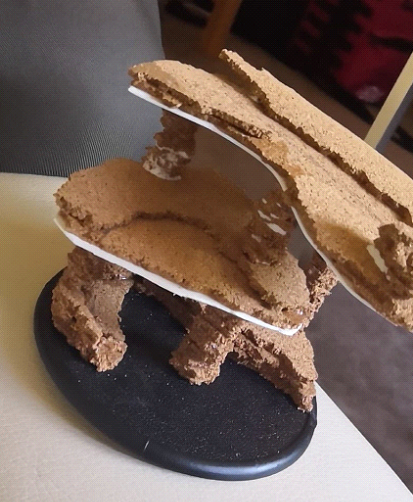 I built the profile up from the bottom layer, using cork.

Then cut plasticard for the upper sections and built from there. 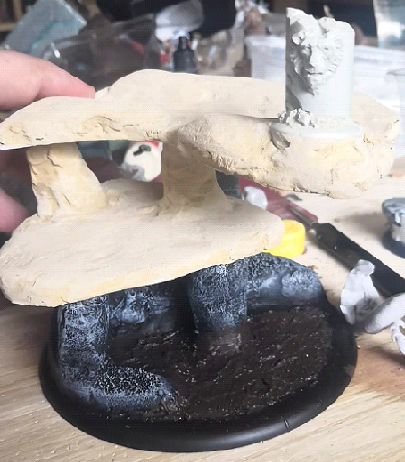 I then added mortar, and sculpted first with my fingers and water while it dried, then sanded it smooth

Then, I painted the base, and added the diorama details (not shown) before moving onto the water.

Water Effects: Crystal Resin and You 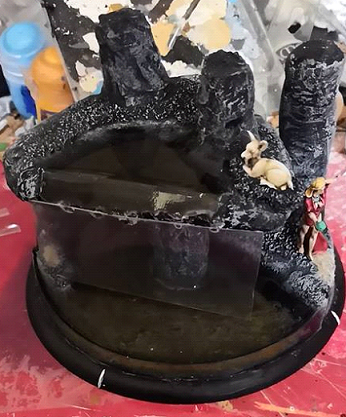 As I mentioned, I used a 2 part crystal resin for my solid water effects. It’s pretty simple to use; you get a really sticky, goopy liquid, and one thinner one. They mix okay, and the result is a pour-able mixture that sets rock hard in about 24 hours.

Then, with this in place, it was time to start with the sculptable water effect. Go slowly, giving it time to dry, and slowly build up the layers until the waterfall is somewhat translucent. 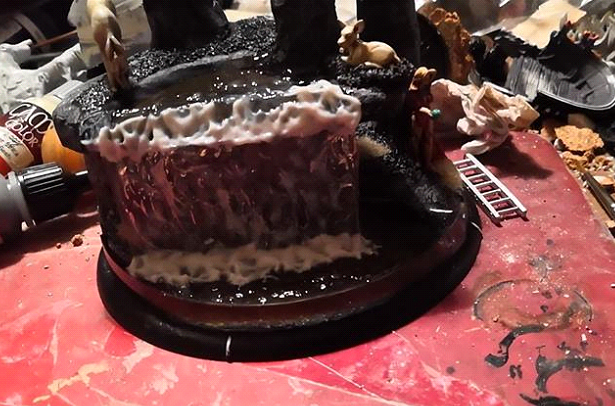 I used the same effect to create some motion on the surface at the base, and to add some waves to the river at the top. 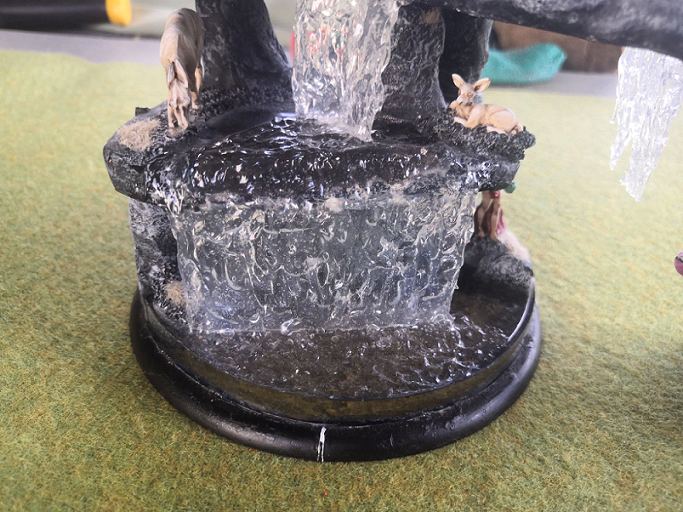 The final effect, in all its glory!

With the effect set, I awaited my window for the rest of the build:

It’s also big, so we need to stretch these legs right out. We also need it to be removable. I thought about magnets, about clips, but decided to trust gravity in the end, and use plasticard.

This is somewhere I cut a corner for sure, because I didn’t really fill gaps here or paint this much, I just made the sketch and glued it on. 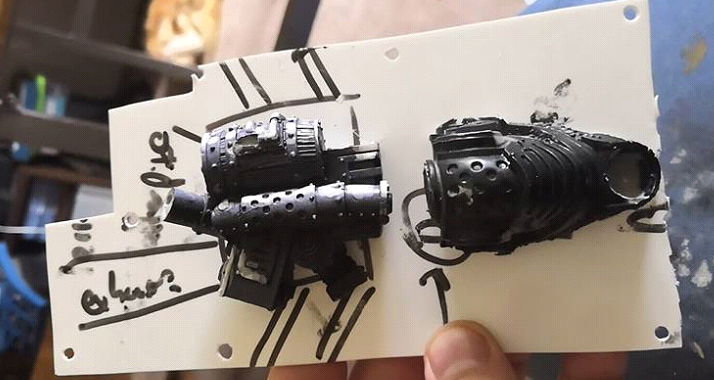 Cut a piece of plasticard to match the footprint of the house, and on the bottom I sketched where I intended to use the original components to make the mechanisms of the machine.

I put a bunch of big pins in the bottom of the house and made holes for them around the edge of the plasticard. The result was almost there, but still too flexible, so I sturdied it up with some 3mm brass girder I bought at my local model train store: 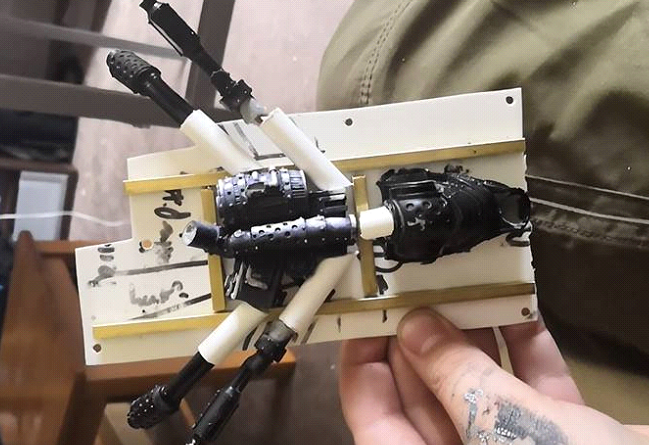 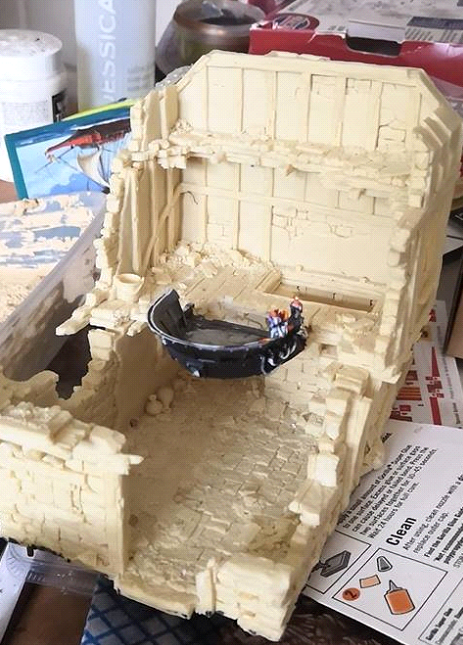 At this point, I glued Old Witch’s balcony onto the house, to give her a distinct platform to stand on.

The feet lose the toes and go on the base. I originally intended to sculpt chicken toes but ran out of time, so hooves it was. I pinned them on with some 3mm brass rod (I used a lot of this for the legs). 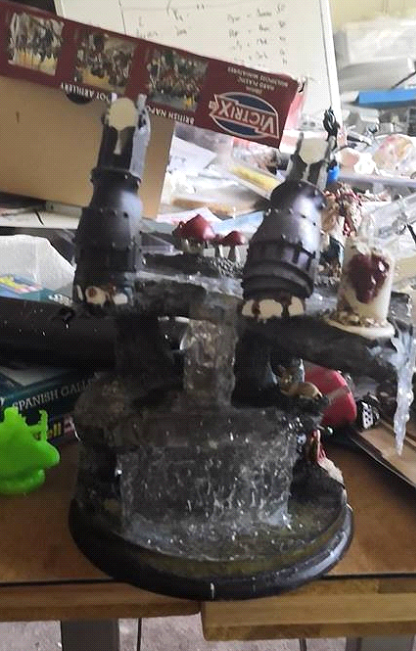 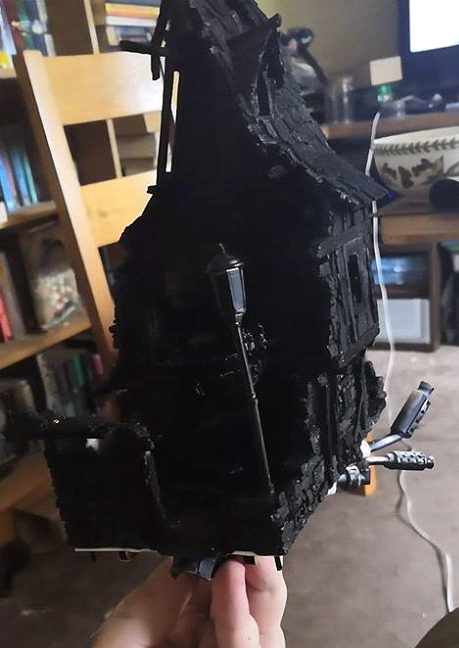 I had decided before undercoating to add some lampposts, but these were removed before moving onto painting, as they would struggle to survive flights.

Nothing interesting here, as my Grymkin are VERY tabletop so I’m not going to go into too much detail, although I’ll give a quick scheme rundown in case anybody is interested.

First, we mask the base off to avoid spraying it. (yes, it’s the same photo, this was 2 years ago, sue us) 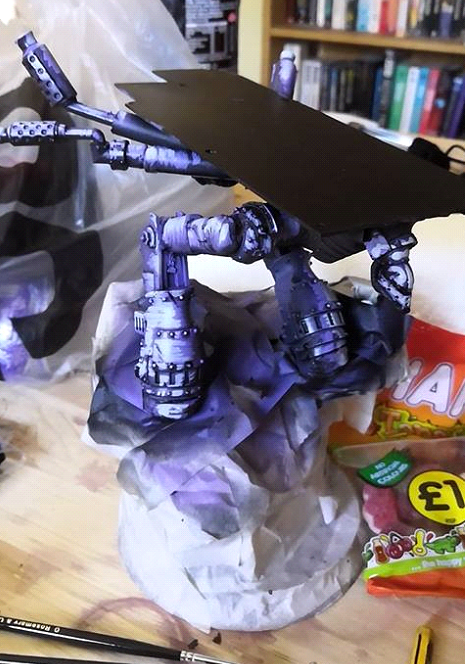 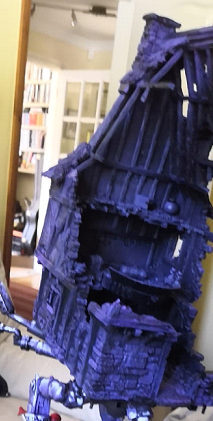 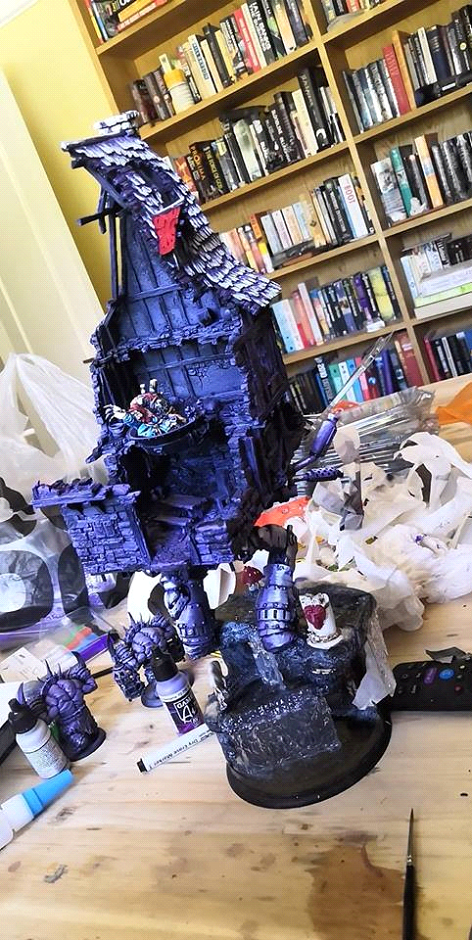 Highlighting is exaggerated and cartoony, of the Hexed Lichen mix, pure Vallejo Model Air Stonewall Grey then a heavy white. 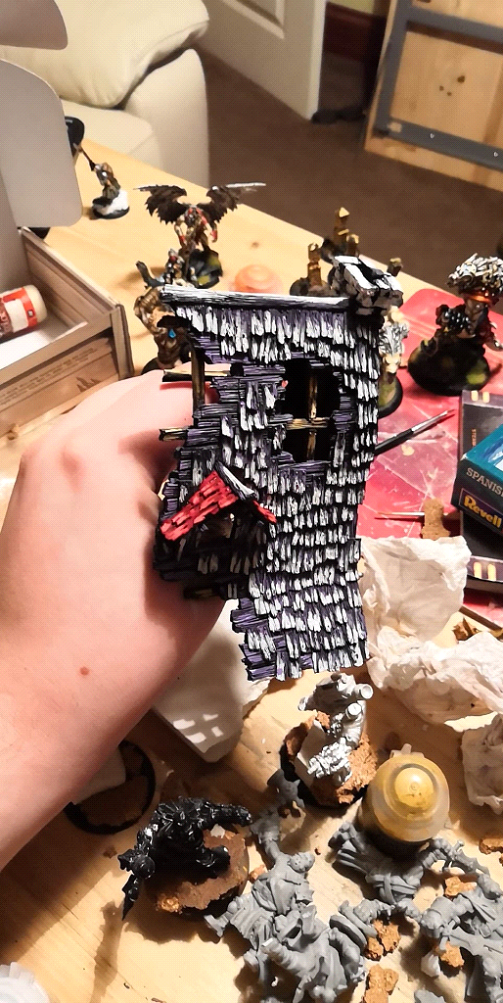 Better shot of the roof

Fill in other details, and that’s basically it.

She comes into three sections (base, house, top of house) and has been flown a few places only breaking once.

My favourite game at events is to ask people to pass me the completed model. They do it very, very carefully, then I pull the top off and leave. People hate it.

Tune in next week, when I’ll definitely finish a Khador article, I promise (you’d better -Ed). Here’s some more photos of her: