A long time ago, when I published the VTC mapmaking article, I said I would come back to it and put something up where I went through my personal process of map design, more for a fun experience for myself than for ~dem views (which, to be fair, kind of applies to all of our content). I've been extremely busy with many many things, but I've wanted to come back and actually do this article ever since, so... no time like the present!

Now when we sat down to make the VTC maps as a committee, we each assigned ourselves a scenario or scenarios to cover all of the maps for, meaning we would be making about 5-10 maps each. This of course meant that we would be making maps in a shared context, which is something I'm not going to replicate here, because making 5 maps just for the sake of an article would be a right pain for little gain. What I'm instead going to do is give myself a 'brief', so to speak, and show how I would work to that brief.

First things first, I need to pick which scenario I'm going to use. I went with King of the Hill, because we're not using it this year. As for which background to use, I just randomised it, and got Beach (which is good, because it's one of my favourites due to being very pretty). Now when I'm designing a map, I try to make sure the terrain is as visually cohesive with the background as possible. As such, I limited myself a bit - while there were some pieces of terrain taken from other packs, I didn't use the full VTC range. Which ones I picked, you can see below :) 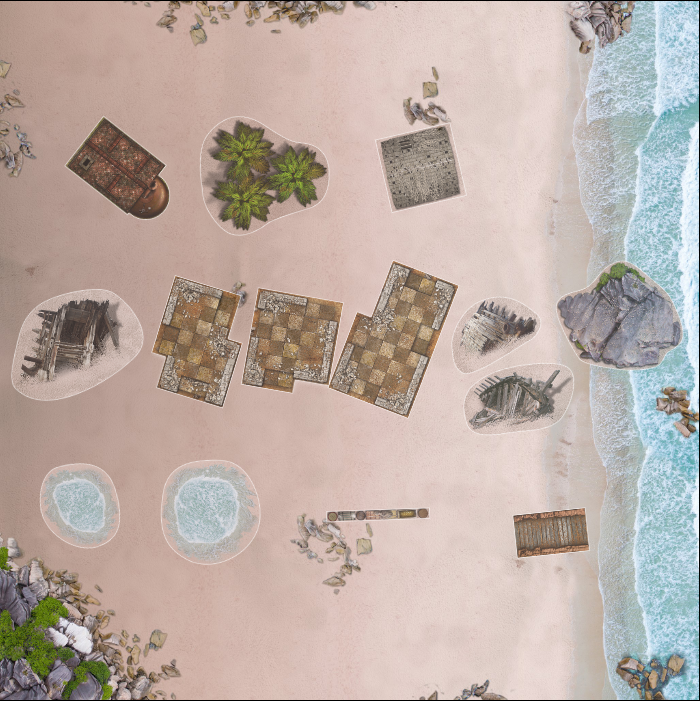 Next up was getting into the details. You might remember from the previous article that I worked from a few metrics of map traits. These were as follows:

Now one of the neat things about the maps is that they kind of inform which of these metrics is going to be particularly high and low, if you're sticking to the terrain 'theme' I outlined above. For example, Swamp maps tend to be pretty low on 'caster safety and huge base difficulty, but high on Pathfinder necessity and cloudability, just due to what's available and fitting. However, as this is a solo map, I'm just going to see how it shakes out, and if it's boring, we'll pick a couple of variables and skew it for higher reads on them.

Then comes the bit that might surprise people - I don't actually start the map with a competitive focus in mind. Because these maps are going to be streamed with a very high frequency, I want them to look visually appealing, and for me personally, that means having some level of coherence. Also, I find that framing my balancing efforts in a certain context gives me direction. Usually I name my map after it's been made, but today we're going to start by naming it South Shield Standoff. I'm going to name more maps for Cygnaran stuff, just so I can imagine it all being blown to bits. Cygnar Delenda Est. Let's get our blank canvas ready. Also, have the terrain guidance for reference, because I'm sure it won't come up later at all in any way. 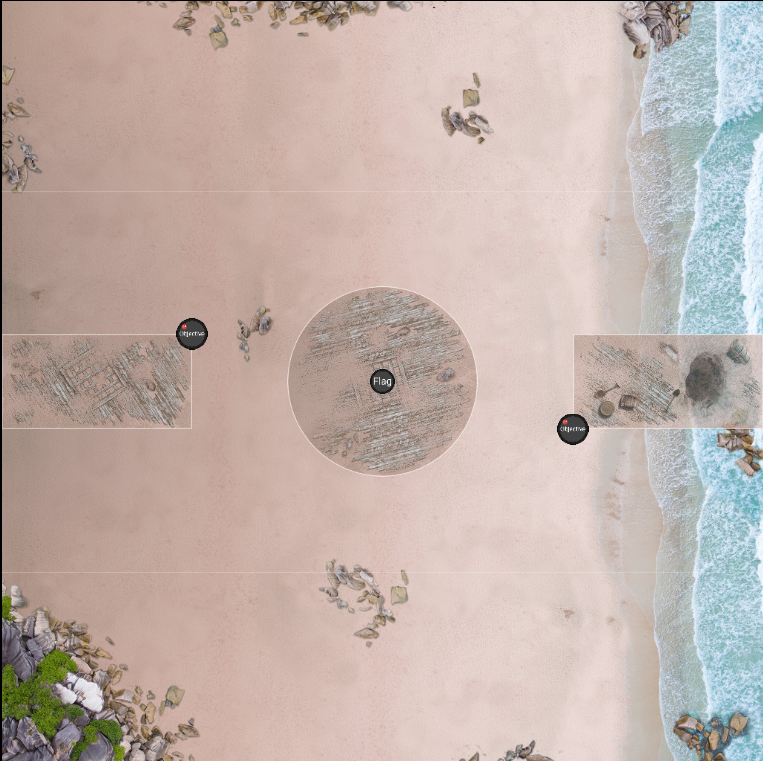 So, pulling a bit of inspiration from the name and the place; this is a Cygnaran place, so I'd expect it to be pretty civilised - a couple of buildings won't go amiss. The Standoff part of the name means I'm probably gonna try and go pretty even with the terrain - now, don't get me wrong, it's not going to be entirely even by any means, because you want to make sure there's a relevant choice to be made at the start of the game, but by the same token, you don't want the choice of whether to go first to be irrelevant either. Balance in all things :)

So rather than go through and explain every individual decision, I threw together a first draft. It's awful. 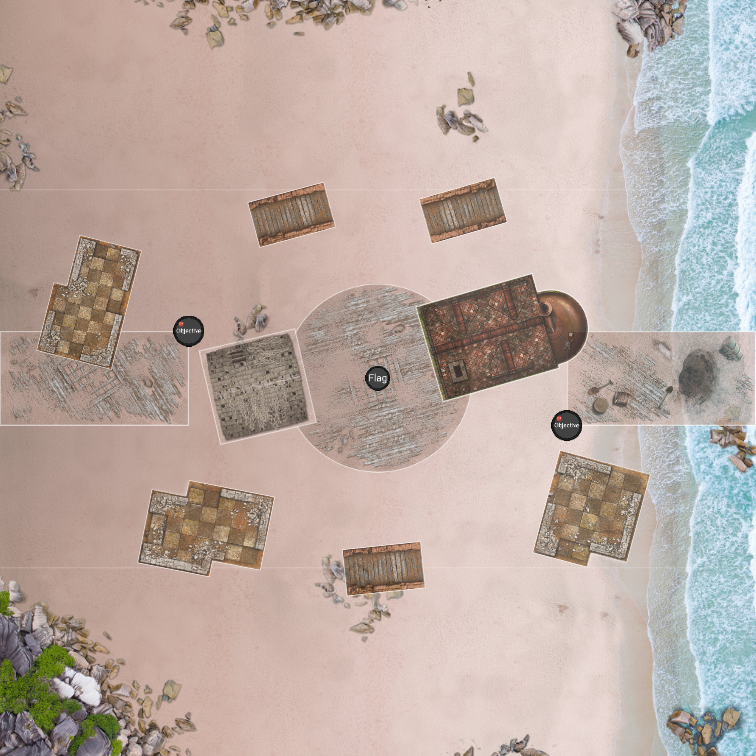 Now what I was trying to do was have a bunch of buildings in the centre to represent a small township, then have some trenches and rubble dotted around the outside to show the lines of engagement. The first problem is that Steamroller terrain rules exist, which meant that I ended up with two buildings and made the very poor decision to make one of them a wide boi, and the second problem is that this is just... boring. As I've made it, I've decided that a good goal for this map would be to try and force central engagement in that 'no man's land' area in the centre, as the usual thing for King of the Hill is nipping hard round the flanks and doing something different would be interesting, and right now I'm not accomplishing that. So we're going to redraft this, and see what happens. 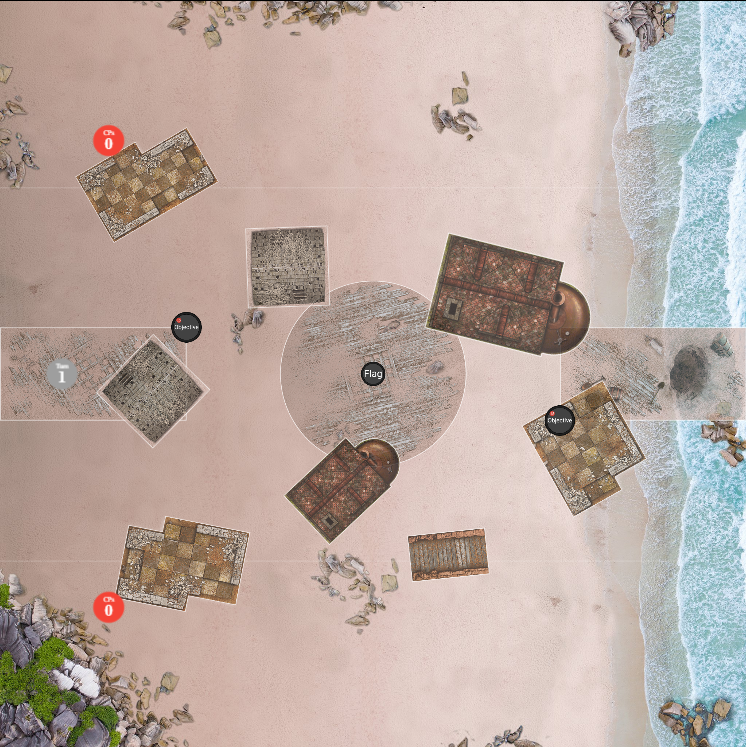 So this is also kinda awful, but for different reasons, and less than previously. We're getting somewhere. Let me explain for a moment why I think so poorly of this, though. Firstly, I've accomplished my goal, in part, of making the outer rectangles decently hard to claim. A large building limits the ability of, say, huge bases to make an offensive push from the top into the right zone, and cover is available to models trying to contest it, so an enemy is going to have to get stuck into to clear it. That cover is also rough terrain, which means that certain windy bois with push effects will have a bit of a harder time. Meanwhile, the left zone is kind of mutually difficult, in that the Objective is partially protected outside of a central-ish push by bottom (the goal we're going for), while also providing decent contesting spots for both sides. Neither of these zones are unscoreable, though, and that's important, because you don't want to railroad players into having the same game every time they use a map. You want some element of replayability, after all. I'm prepared to call those outer zones qualified successes. We also have an interesting element emerging of 'caster safety, as there's decently safe refuges available on both sides. As in the last article, it was a bit hard to extricate a rating for any given map when the sides might differ, so it's nice to have one that's just safe on both sides.

I haven't explained why I think this is awful yet, though. The reason is the central zone. For want of a better way of phrasing it, I'm 'punishing' players for going wide, but they're definitely not being rewarded for going central here - my self-imposed limit is starting to bite, because without a central blocking piece I can put over that flag, it's a pretty easy proposition to murderise whatever gets into that zone. Like, it's basically empty right now. The stick is there, but the carrot isn't, and that zone is a little difficult to get into as well. Also, that top right of the board is just depressingly blank. We've got some things we can provisionally lock in, though, which means that we can tweak rather than rework, and I have some ideas... 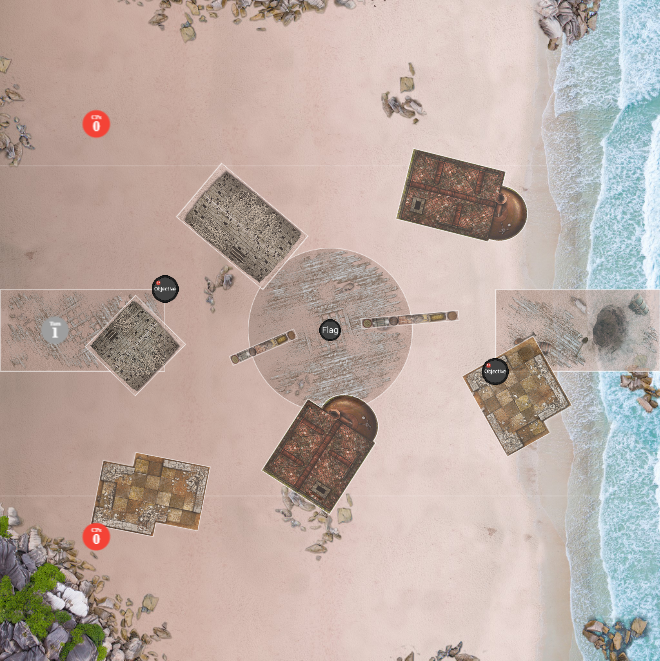 I'm... happier with this. This appears fun and compelling. Naturally, this means immediately checking the Steamroller guidelines to see where I've gone wrong.

One bout of swearing and quick-fixes later... 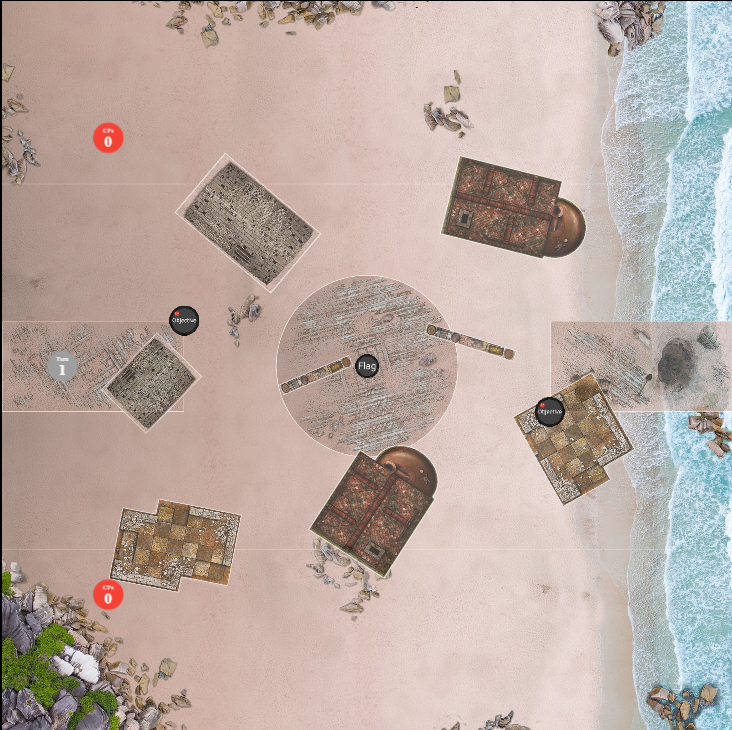 Okay, quick-fixes might have been a lie. I've kind of made some tweaks to the map that are pretty impactful while fixing the broken bits. First off, every terrain piece is Steamroller-compliant. The 5" AOE is my friend for measuring this. Worth noting for any of y'all amateur map-designers out there, compliance gets exponentially harder as you add buildings and walls, and while this is an extreme case, it's always worth doing a few passes just to make sure you're 100% sure it's a legal map.

Anyway, onto why I'm happy with this now. The buildings, while still impactful, aren't quite the focal point of the whole game. There's an important difference between terrain that dictates early game positioning, which generally only really matters for one or two turns, and terrain where the actual engagement happens. I find that getting the latter right is much more impactful, because it's going to have an effect for much more of the game. In this case? I think I've done that. The building, walls, and rubble all matter; fighting over the centre is much more heavily incentivised than it usually is on this scenario, while the sides are still workable. You can play huge bases here, but the potential detriment is sufficient enough to dictate table choice, and both 'casters can play in safe positions, albeit with more reward on one side to keep the starting roll impactful. Each side has different challenges to contend with on the way in, such as the blocking buildings at the top, and the rough terrain at the bottom, which will matter in different amounts to different lists. This isn't particularly friendly to cloud walls, although you could maybe screen your own Objective nicely at the top. Finally, while there's tools to mitigate against it, a gunline has some nice clear firing lanes, while not being able to just sweep the scenario clear, even with the absence of a central blocking piece.

Overall, this was interesting, for me at least. I'm not going to promise any follow-up, unless people really liked this and want to read more on the subject. I'll leave you with a link to the map in case you ever want to try it, and thanks for reading :)