Because I could not stop the Death
It bigly dabbed on me
My caster tried to yeet some bois,
And dodge a top of 3.

Yet though I bricked
It knew no stats
And I had put away
My models and my knockdown too,
For Its Divinity

Or rather – It passed Us
The Scythes drew quivering Death Chill
For only shitty, my ARM
My boxes – never full 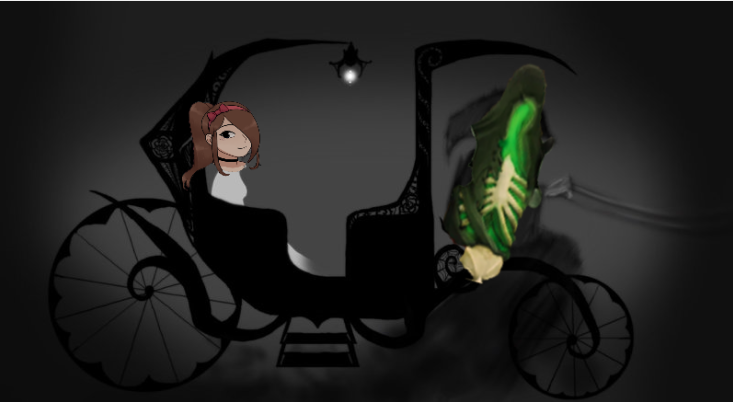 So a couple of things about this article before I begin. Firstly, it's came about thanks to one of our Patreon backers, Kombat, asking a question that I didn't feel I could fully approach in the context of a two minute snippet. Secondly, because it was such a good question (and was followed by an explanation of why it was being asked that really resonated with me), this is going to be an ongoing thing, where I look at common threats in the meta and determine how to deal with them. So yeah, thanks Kombat, this is gonna be good!

The Death Archon is currently the piece to beat. If you need a refresher on what it does, just look at the tooltip and enjoy the hundred miles of text, but the salient points for our purposes are that it absolutely blends anything with the misfortune to be a living model, can put Stationary on a clump of models all in one go, is relatively fragile by Archon standards (though not an easy target), and has a very good base threat range. On its own, it has exploitable weaknesses, but the real 'problem' situation that the meta is facing at the moment is how to deal with the lists that patch those weaknesses. It needs fuelling to be truly terrifying, but has access to easy refills in the majority of competitive lists. Normally, a combat solo with almost no defensive tech would be priority #1, #2, and #3 for every gun in the opponent's army, but we're seeing it played with lots of Shield Guards, access to Wind Storm, a cloud wall... the list goes on. Giving this model the defensive tech to see it delivered is key. On the other side of the coin, dialling up its offensive output can lead to some massive damage output from it, to the point where it can potentially take multiple heavies off in an activation with some bad positioning and good dice, and it takes threat range buffs really well, owing to having a pretty damn good base threat range inherently, as well as an extender.

I never thought I would die mad about a change in kerning, then they increased the space between the L and the I. Godspeed, Fucker; you were my favourite ability name.

Right off the bat, though, there's stuff we can exploit. Firstly, any solid spellcasting offense can probably take a Death Archon off before it goes in. DEF14 does mean that most casters are going to need 7s, so I recommend having some kind of increase for that so you're not wasting resources on boosts. The lists that are doing well with it either don't run magical defence, or the magical defence that they do have is limited to Friendly Faction models. You might think that this represents a significant overspecialisation, but it's actually not - I'd argue that with the high volume of anti-shooting tech in the meta, as well as the significantly elevated number of high-output, low to mid-resilience combat Solos in general, it's a good time to have someone with an Arc Node in your pairing to just pick them off. (sorry, Khador players) 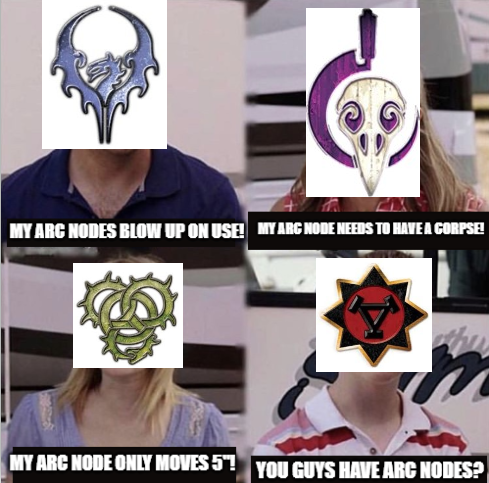 Next up, we can target it with our listbuilding in general. One thing that the Death Archon doesn't really like doing is hitting Constructs. Now I'm not going to pretend that getting clonked by a couple of POW15s (or worse) isn't going to hurt, and that the Stationary from Death Chill won't be annoying, and that the rest of the list won't be able to hurt you too, but that amount of caveats is to be expected when we're dealing with a strong model. I'd recommend having a Construct-heavy list in your pairing anyway, because I'm me and that's just how I build lists, but between the Warmachine factions and the Hordes factions, you're probably going to be able to either build like that or have some spell output (or both). Anyway, what can help a lot is if you have access to DEF13 or higher, as it turns out that MAT7 is kinda inconsistent without help when you really want to land two attacks. Standout examples of this are the Manticore and Clockatrice, both of which are pretty good models anyway, but this is a good reason for you to maybe consider going big on them in a list if you're playing Retribution or Grymkin. Otherwise, just getting behind an obstruction can help.

Another exploitable weakness is the fact that most lists taking a Death Archon won't have any soul protection for any living models they're taking (with some limited exceptions). This means that some soul-collecting models get to be absolutely radiant when they see a Death Archon, so having a list where you can really punish someone by getting a soul train going might make someone think twice about dropping their Death Archon build, depending on what it constitutes (some of the Minions version have a *lot* of living models, for example). Depending on how the evolving meta shakes out, this may end up being an actual consideration for Death Archon players - doubling up on a pair of them in each list has been rare so far, as it looks like having at least some Soul Ward in the pairing is something people want so far. Even if such ends up being common, if you present an opportunity for your opponent to make a mistake at list selection, sometimes they'll end up making it, so consider it a bonus if that does occur.

Now if you're in the worst case scenario and you have a list that Death Archons will absolutely blend, don't panic, because there are still some things you can do. Firstly, depending on your force composition, you can bait a bit. Ultimately, a Death Archon will mostly only get one really good turn. There are exceptions, of course, especially in Minions who're good at getting ARM buffs on it, but what this means is that you can try and force some mistakes with positioning. You've got to be *really* careful with this, because of Spectral Flicker, but it's an option that's available to you - basically, put small, expendable clumps of your infantry in little Death Archon-shaped bubbles, and just dare the enemy to enter your magical piece trade. It's basically a matter of negating their reach - if you just come well into their threat ranges, it doesn't really matter that they threaten some ridiculous distance; the enemy is in their face, and they've either got to deal with it or die. 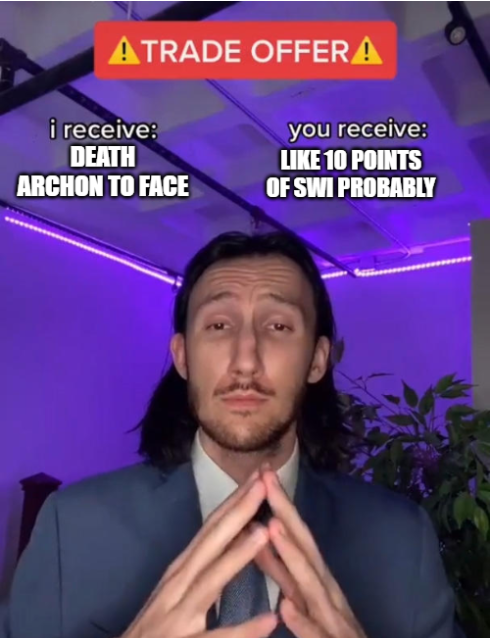 Next up is a really fucking hilarious problem for Death Archons, and I absolutely love that this is a thing. See, they're pretty indiscriminate in terms of what they hit, so they really want to go in early to avoid catching their own models in the Blood Reaper initials. I know that when I've been playing them, I've had to really work to avoid ending up with some of my key models being Stationary or dead just due to order of activation issues. Now if a situation can arise due to error, I'd argue that it can arise due to engineering also, though this feels like an even more dangerous game than the aforementioned baiting - but again, these are very good models, and it's going to be difficult to deal with them, so this is the kind of level we have to work on. If you can set this up consistently, I'd really like to see it - when it's happened to me, it's been against a wall of living heavies, where I do want to send my Death Archons in, but they also kind of want to be in the same place, making collateral damage inevitable. 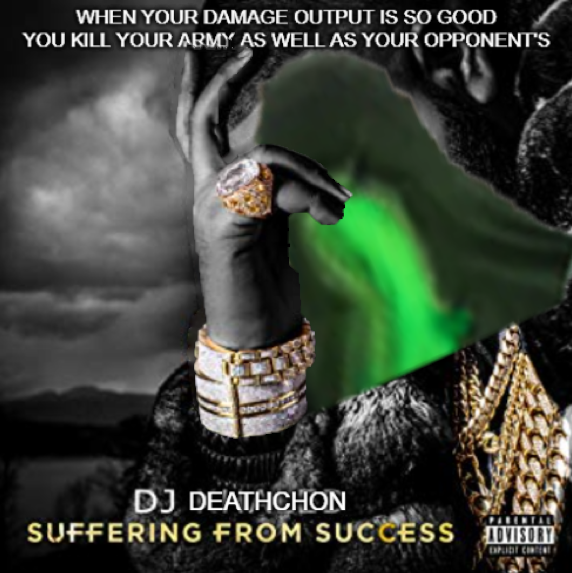 Finally, if you can't beat 'em, just join em - a fun fact about Death Archons is that they're actually kind of bad at killing each other. None of their rules for offensive output or damage debuffs work on them, so you subject your opponent to the exact same threat, while reducing the amount of vulnerable models in your army.

This was *really* fun to write (though don't expect any more poetry), so I plan to do more in future. Let me know in the comments if there are other models you want me to cover, and if y'all have any good ideas for naming this series, shout em out!