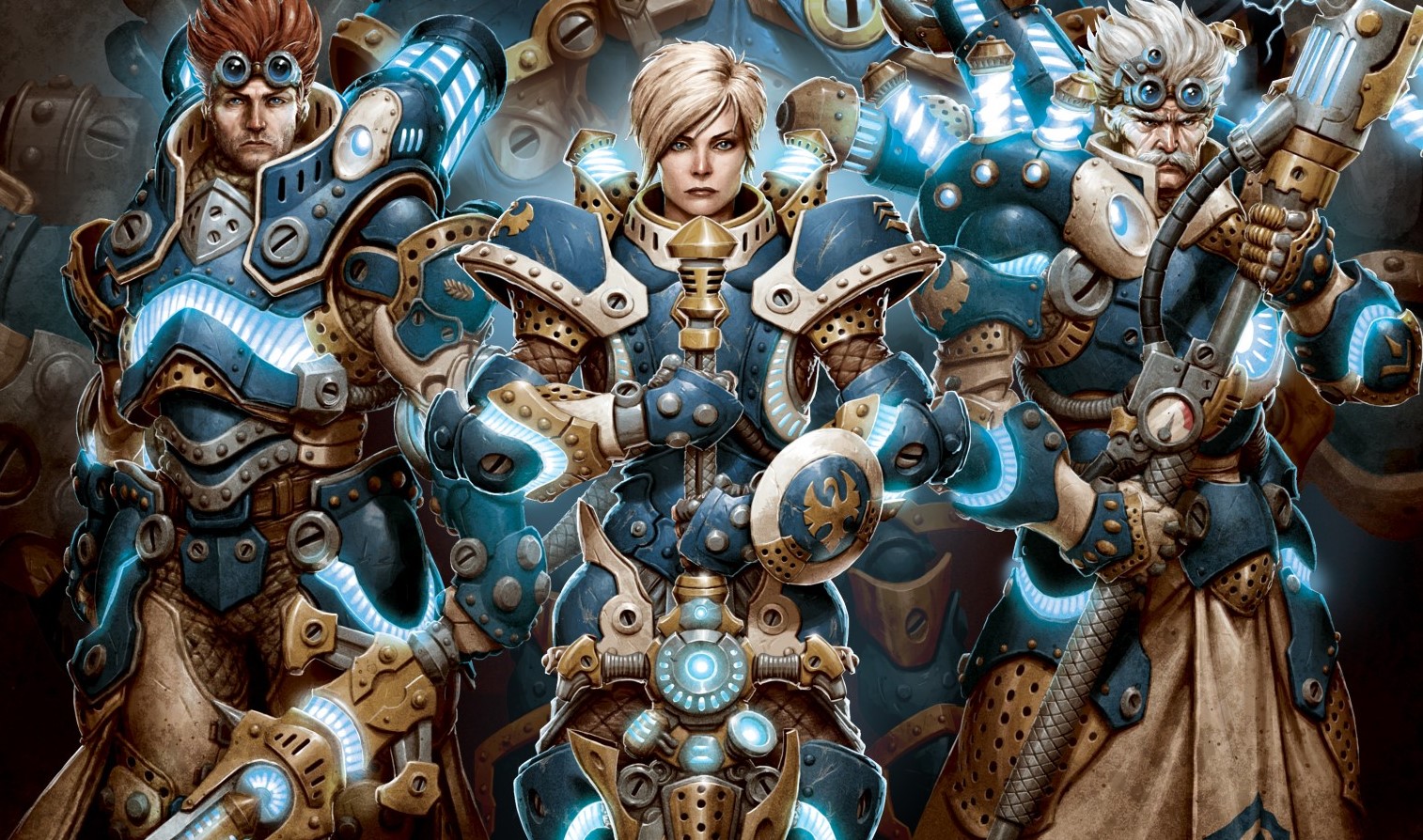 Hi all, Jake here with the first in an ongoing series where I briefly dive into talking about my first love, Cygnar. Today, I’m going to give a brief overview of my pairing, and a couple of the options that I’ve recently tried for the second list.

First off, let’s look at the ‘main’ list, that I’m looking to play into about 60% to 80% of the field. In current Cygnar listbuilding, there’s not really any major reason not to look straight at  Flame in the Darkness for this, and the stand-out generalist competitive ‘caster for the theme is Stryker2 . 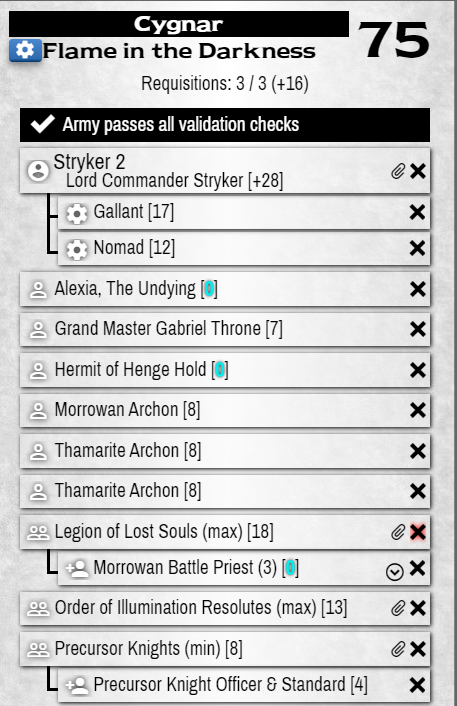 The Battle Priests are spread between each unit, which Conflict Chamber doesn’t currently allow. -Ed.

The list that I’m running is well-balanced, with all the usual tools. We have a nice little smattering of anti-shooting tech between the various Shield Guards, Deceleration, and Alexia3 ’s Passive Necromancy to discourage uninvested shots, all the usual good models, and the terrifying melee output that Stryker can bring to bear with the combination of the list’s various damage buffs, Positive Charge, and his Feat. There are a couple of choices in there that some people might not necessarily favour themselves; namely, going with a min unit of Precursor Knights and a Nomad . The Nomad is honestly just there to be a good heavy that takes our buffs well while giving us the points to take the Precursors , and I’ve been experimenting with a double Talon battlegroup to better apply Positive Charge and cover rectangular zones better. However, I’ll stand by the inclusion of the Precursors here – basically, I want a unit that just straight up cannot be targeted by an enemy Rebuke, which I’ve found to be a real day-ruiner if my opponent is prepared to take the damage from Spell Breaker hits by Battle Priests to keep the spell on Legion of Lost Souls or Resolutes . The mini-feat is nice to have as well as a way to dial that already huge damage output up yet another notch, but that’s mostly just a sweetener on this tech choice. 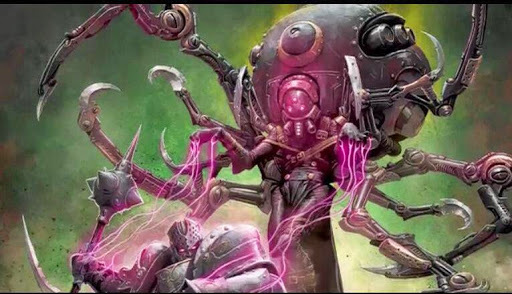 But Jake, I have clear evidence of a spell being cast on Precursor Knights right here! (2014 art misprint gang represent) -Ed.

Now, as with all lists in the game, we have some iffy matchups. In my early testing, I’ve found that there’ve been issues with Krueger2 and Zaateroth , because of the infantry removal options available to both of those ‘casters, and the power of Rebuke, even with my tech. Often, a lot of my army melts before it really gets anywhere, and I have to feat with scattered elements of the list to try and claw attrition back – which is doable, but we’d much rather have an offlist that gives us an easier game. I’m still in the early stages of exploration, so other bad matchups will presumably appear – leave a comment with anything you think is problematic and I’ll try and give it a test – but for now I can only speak of those, and the various skill games, like the Harbinger , Fiona , and Zaal2 matchups, which are potentially swingy but not offlist-priority as of yet.

So now, we come to our offlist options. I reckon that there are four standouts – Siege1 or Haley2 in Heavy Metal (and in Haley2 ’s case, Storm Division), and Stryker1 or the spicy option of Constance Blaize in Flame in the Darkness. I’ll lead off by saying that I’m not a fan of Siege1 , as in my opinion he struggles with the matchups that we’re trying to cover here like Krueger2 and Zaateroth , but as I’m no expert, I’m going to recommend that if you want to use Siege1 , Daniel Bergstrom is the undisputed master of the ‘caster, so he’s the one that you should consult for tech, lists, and matchups (just don’t ask him to defend Europe’s honour against an American, it didn’t go so well last time and I lost a bet… 😥 -Ed.). 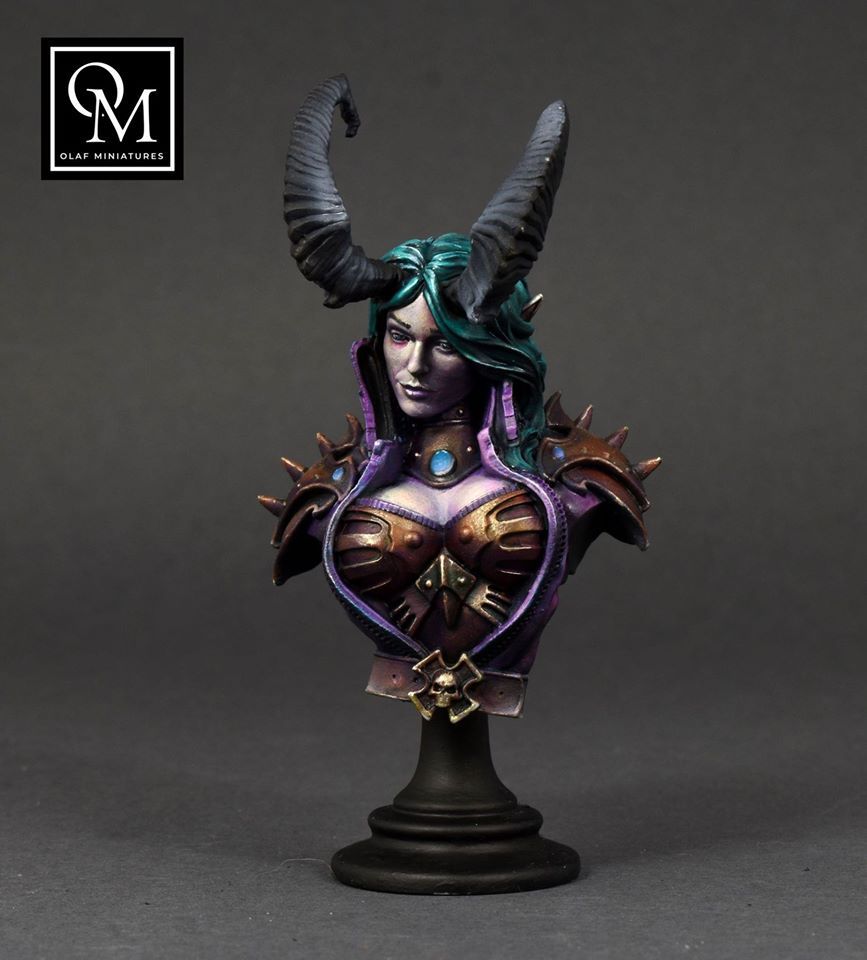 So close to having a really pretty bust, Dan… you could have used it for target practice

Moving onto more familiar ground for me, we have Stryker1 . I’ve been playing a +5ARM feat with Zaal2 for a while, and the principle is sort of the same – take a really good huge-based model (in this case, the Blockader ), and just do good work with it while having it be really hard to kill. Season with the generic Flame in the Darkness toolkit, with Morrowan Archons becoming really obnoxious to kill, all of the infantry units loving to have access to Blur, and Thamarite Archons becoming a real backline terror with the extremely long threat range that Snipe gives them, and we have a list that’s arguably a good generalist in of itself – a useful trait for an offlist to have, because it means that our opponent is kept guessing about what we’re going to play. In terms of our bad matchups, this has proven pretty good into Krueger2 for me – while we still have a Rebuke problem, Krueger2 really struggles to punch through the armour that Stryker1 puts on the table, even with Woldwyrds to punish upkeep use, and the Blockader can comfortably wallop his army, or sit back and blithely ignore Windstorm with its SP10 guns. 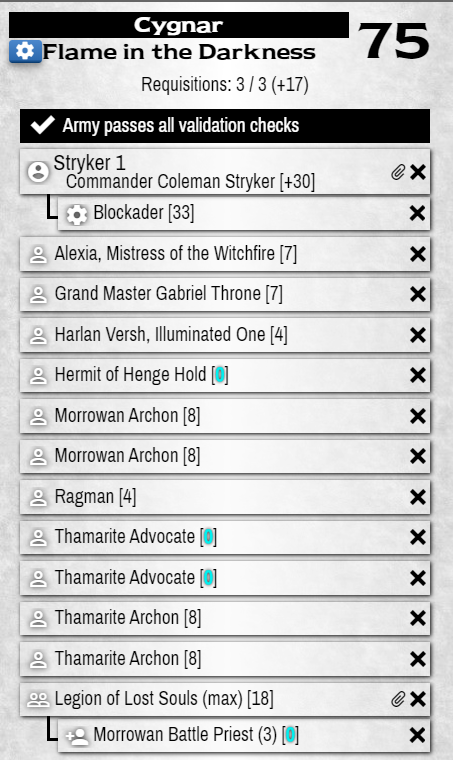 Thirdly is my first love, Haley2 ; often nerfed, never ditched (as long as she keeps Telekinesis, which for my money is the most fun you can have in Warmachine with your pants on).
I’ve put a list below which is very much a work in progress, because of the sheer amount of warjack options that Nemo4 makes available to the faction, but the essential trait of it is that we’re taking heavies that use Haley2 ’s very strong control feat to trade well into the low model count lists that we’re trying to play into. Our Arcane Shield Resolutes are very hard to kill with most Infernals shooting, denying good Rites of Torment triggers so that we don’t have to worry too much about losing heavies on our feat turn, and we have consistency fixers to make sure that our otherwise mediocrely-statted warjacks do the work we need them to in a big burst of attrition against the fragile-ish heavies that we’re trying to kill in our target matchups, through which we’re trying to force an early scenario win before our momentum runs out. The list is razor-edge balanced on getting those consistent outcomes, though – with such a small model count, one bad activation can spell doom, so be sure to use Puppet Master in the correct place. If you can get past the skill floor, though, the list is very fun to play, so I strongly recommend it. You could also switch over to Heavy Metal for Reposition (3″) on all of your solos, but I like Stormsmith Stormcallers as cheap flag grabbers, and Immunity: Electricity is very relevant into Krueger2 . 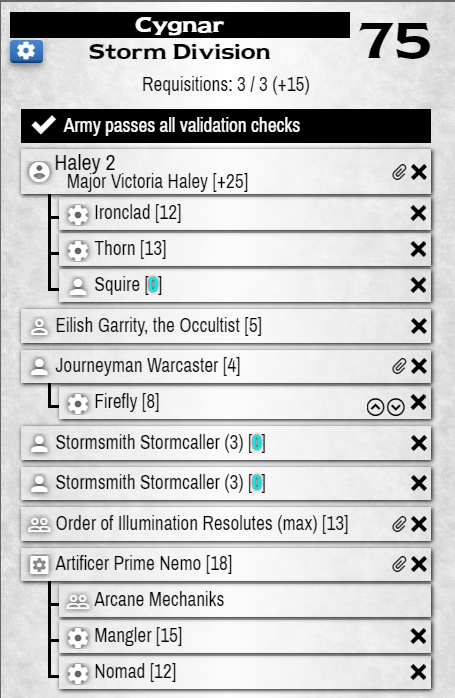 You love to see that cheeky Mangler – it may be a tad overcosted, but it has the extra output that we really want.

Lastly, my spicy pick here is Constance Blaize , who we of course take in her natural home of Flame in the Darkness. The idea here was to comprehensively solve the Rebuke problem by having Repudiate as an easily applicable solution, as well as a big spell-immune unit of Precursor Knights to really mess up Krueger2 ’s day. While we’ll struggle a bit with some of the control options still on the table like Anathema from the Desolator and Lightning Storm from Krueger2 ’s Woldwardens , we do have a unit of Resolutes – bumped up to a relevant melee threat range by Crusader’s Call – who can wade through these hazards and dole out much of the smacking. Combined with the boosts from Blessing of Morrow, and the high-ARM turn from the Feat, (you can take the player out of the Zaal2 faction, but not the Zaal2 out of the player… -Ed.), Constance is a definite dark horse option that I’m really excited to try into a lot of matchups. 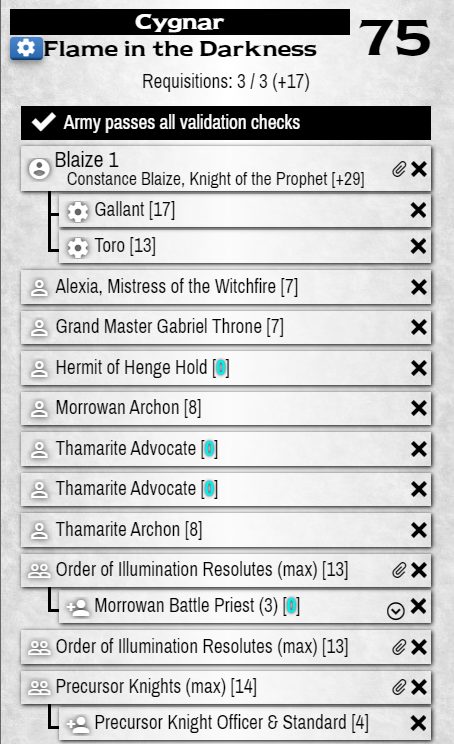 Once again, assume that those Battle Priests are observing social distancing and are playing one to each unit.

Thanks for reading! To finish up, don’t feel locked into the options I’ve provided here – with the tournament season mostly cancelled, there’s never been a better time to relax and try some new things. Happy gaming! -Jake