Well, shit. I don't think any of us were expecting that. 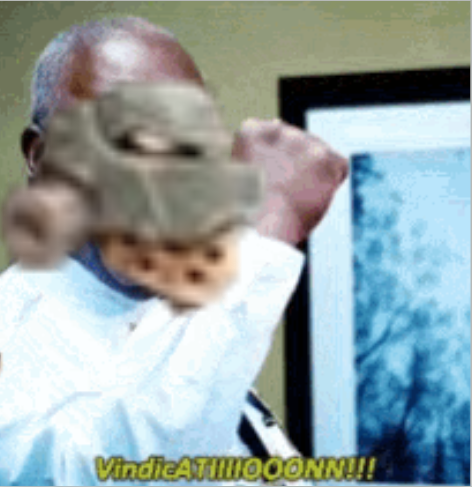 Honestly, I said this on the KnightsCast episode we did on this update, and I'll say it again. The unexpected change we got in this update is Faction-redefining. It's taken this from an update that buffs what was already good into a completely unsolved mystery, and I don't say that lightly - I'm seriously looking at a lot of bizarre options, purely to start covering some obscure matchups. What I thought I'd do for this instalment, while I frantically play as many games as possible to get up to speed, is to throw out a few lists that I'm looking at, ranging from my current competitive pairing, to some of the out-there stuff that I want to put on the table a few times. 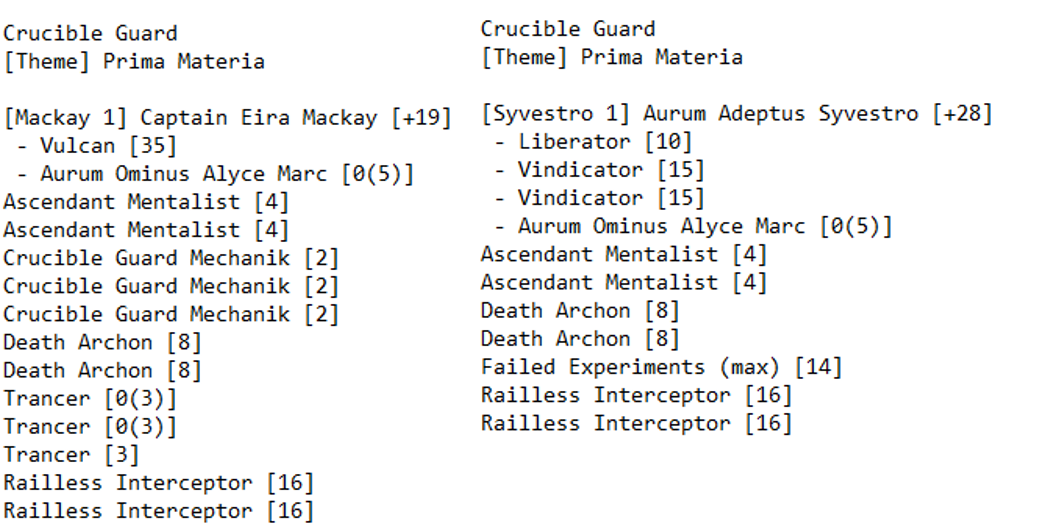 First up, my current bread and butter. Yes, it includes Syvestro, on whom I understand my dim view has caused a significant amount of consternation. Between the ending of the CID and its release in the Dynamic, I've been putting him on the table where I can, in line with my principle of 'if you think something is bad, play it, because you'll either be wrong or more able to defend your viewpoint with experience'. In that time, I've been enjoying the combination of the Ascendant Mentalist, Transmutation, Ashen Veil, Exhaust Fumes, and Mortal Fear coming together to form a truly hilarious statbubble when it goes off, but the lists have always felt lacking, with the reason for that lying solely with the fact that I was always taking a Vulcan, because it always felt like the best available option. Now, though, I've done a whole-ass turnaround on this guy, and it is entirely because of the Vindicator.

This is the non-jank version of Mackay (the jank version is down below, and you're gonna love/hate/be completely indifferent to it), paired with my new, much easier to fit Syvestro battlegroup. Mackay always struggled a bit with moderately statted medium based units, and the Death Archon is unarguably the best counter to those in the game right now. Mortal Fear can get the Vulcan up to some very worrying defensive stats against living damage-dealers, and the movement from my old build, where I had the Vulcan on Prospero, to one that puts it directly on Mackay has opened up a load of points for me to spend on random flag-grabbers and zone-annoyers. Contesting has always been a death sentence in this relatively fragile Faction, and now I not only get to have more models to do it with, I also gain their corpses into the bargain. 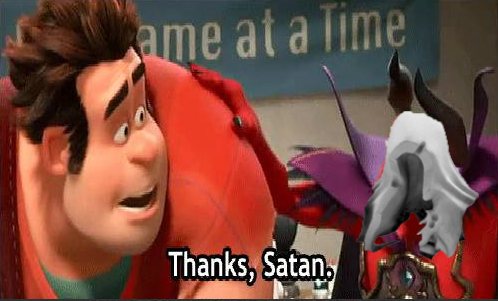 Then we've got the Syvestro list, and I wanna talk about this some. First thing in his favour is that after feeling out Mackay's rough matchups some more, I've came to the conclusion that Gearhart and Clogg aren't really cutting it any more. Previously, I was worried about Legion gunlines, particularly ones featuring double Archangel (as at the time, the Naga Nightlurker wasn't a commonly used tech piece), as well as Grymkin. But, as lists have evolved over the past few months in reaction to the developing meta, there're more Clockatrices and assassination-focused lists built around them (and Gearhart is notoriously death-prone), which has reduced the viability of that somewhat. I do find it a little ironic that Gearhart is the one more prone to death, which doesn't feel very lore-appropriate... 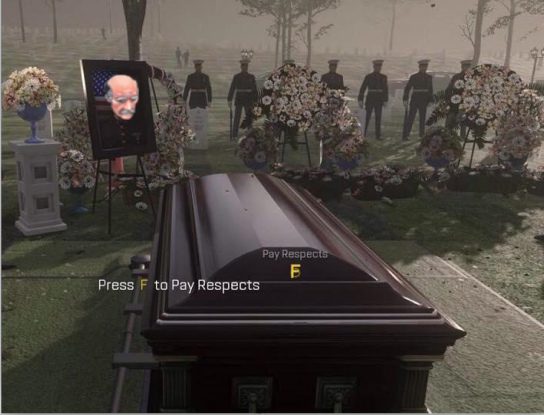 Anyway, back on topic. The other thing is that I was looking at the Archangel problem all wrong, due to focusing too much on the "don't die" part of "don't die, don't lose, win". See, you can stack ARM buffs against shooting all you want, but at the end of the day, you do actually have to kill the damn things, and Gearhart is rather bad at actually doing that in my experience (it would help if his Feat was, like, functional, but we work with what we have). So, rather than trying to bash a tool into functioning the way I want it to, I've looked for someone that can kill them pretty well. And now, with the new Vindicator, we can absolutely do that. Like, y'know what? Tangent time. This change is massive. I'm honestly not sure if it's too much in combination with the other buffs. The Vindicator is still fragile, and a little expensive, but it is now the perfect glass cannon, because the cannon on it can punch a hole through the sun and keep going. A pair of them is a viable alternative to the Vulcan and I do not say that lightly. I can honestly see a bunch of 'casters who want to make really efficient use of their Focus absolutely loving these models, purely because they run themselves. And then there's the fact that they can dump out Withering Humor, which means the Faction can *finally* work with the other debuff it's balanced around. It can still be countered with all of the usual anti-gun tech (at the end of the day, this is still a RAT 7 single shot Heavy, I'm not paying for Prospero these days), but the threat of having a -2 ARM swing delivered from across the board is a very real one. The general concept that the Crucible Guard brain trust I'm in is working with is that you have a Vulcan in one list, and a pair of Vindicators in the other, because the way matchups tend to shake out, you don't really need to have a -2 ARM swing against both groups of models (and if you do, there's kind of some limited overlap between both anyway, thanks to Decrepitation (which, while I wasn't a fan of it when the Vindicator had nothing else going for it, I can at least accept is good in a pinch). and Miasma of Death.

Anyway, what this means for that matchup in particular is that we can have Failed Experiments go and beat up Archangels with pretty decent confidence in their abilities, and not all immediately die in response. What this also means for the list is that, because of the points we save by taking a pair of Vindicators over a Vulcan, we can finally fit all the stuff we want into one list without compromising on Gud Modl. Overall, for the matchups I'm targeting this at, I'm a happy bunny, and I'm confident-ish in the pairing going forward. Now, though, it's time to stir the Jank Tank. [Mackay list with cgi] 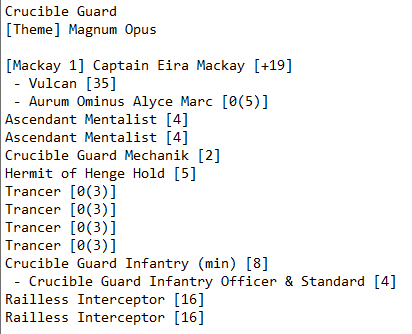 Here's the first dip inside, where we drastically rework Mackay for... fuck all benefit, really. This is sort of me just trying to tighten up the Krueger2 matchup, which in my experience is fine (a rarity these days) if you don't get the big lass rando wando'd, by adding in the Hermit, and also trying to do something neat with Crucible Guard Infantry for the turns where she wants to stay back (so she can dump Oil on something and see what happens).

Editor's note: Today I learned that Oil hasn't been on her card since the initial Faction CID. I am not sure how I managed to go back to those halcyon days, and will go back through all my previous articles to check whether I Crit Stationary'd anything with Veteran Leader... *sigh*

Like 99% of this is the Hermit, really, but I do want to try doing something different, and let Syvestro pick up the slack a bit in exchange for improving a key meta matchup somewhat. I honestly don't have much to say about this other than that, as I haven't put this on the table yet, but our next bit of jank I am absolutely in love with after its first game, so brace yourselves. 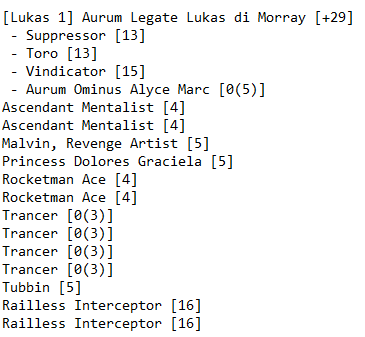 According to all known laws of competitive Warmachine, there is no way that Lukas should be able to win games. Its FOC stat is too small to get its stumpy little spell list impacting the game. Lukas, of course, donks things anyway, because he doesn't care what KnightsMachine thinks is impossible.

Okay okay I'm gonna briefly talk about this stupid list. It shouldn't work; it has good models in it (albeit not tournament-legal ones at the time of writing), and then also silly things that I've literally just put in to fuck around. I know it has no Liberator, and honestly, don't ask me what I was smoking when the Suppressor made it in because I still don't know - this isn't even one of my 'put things I dislike on the table' choices, I literally have no memory of including this model and seem to have just woken up in bed with it. But the thing is, I wonder if the Crucible Guard toolkit post-dynamic makes this shitpost actually function, in a sort of extreme budget version of Secret Masters. We're forfeiting Death Archons for this, which is a grievous sin by the 10 KMmandments, but in exchange we get an assortment of random tech that just might work, and I guarantee I'm going to play this list in some laid-back contexts just to see what it can achieve. I want to shoot a huge base from full to dead with Graciela. A girl can dream.

Anyway, that's enough for now - I'm recording the first episode of Withering Humor tomorrow, and will no doubt be buzzing with Crucible Guard excitement thereafter, so expect this series to continue now that it's been resurrected. Til next time :)

Back to Crucible Guard