I managed to catch another round, this time between Teamy McTeamFace and the Rusty Krakens. The first team to sign up, facing the last, which seems oddly fitting for some reason. Anyway, to battle! 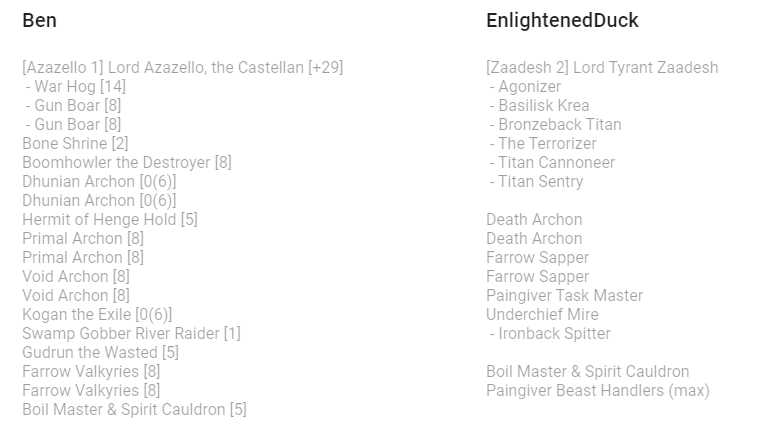 Ben wins the rolloff, taking the first turn, and Michael responds by taking the top side. Ben takes the Observatory objective, while Michael takes Treasure Chest, which is kind of a reasonable default when you've got nothing better to take. Deployment is relatively even, with no major surprises; the Ironback Spitter takes the side with the clearest firing lanes, and Kogan decides to stick to the left forest, but other than that, stuff goes where you expect. 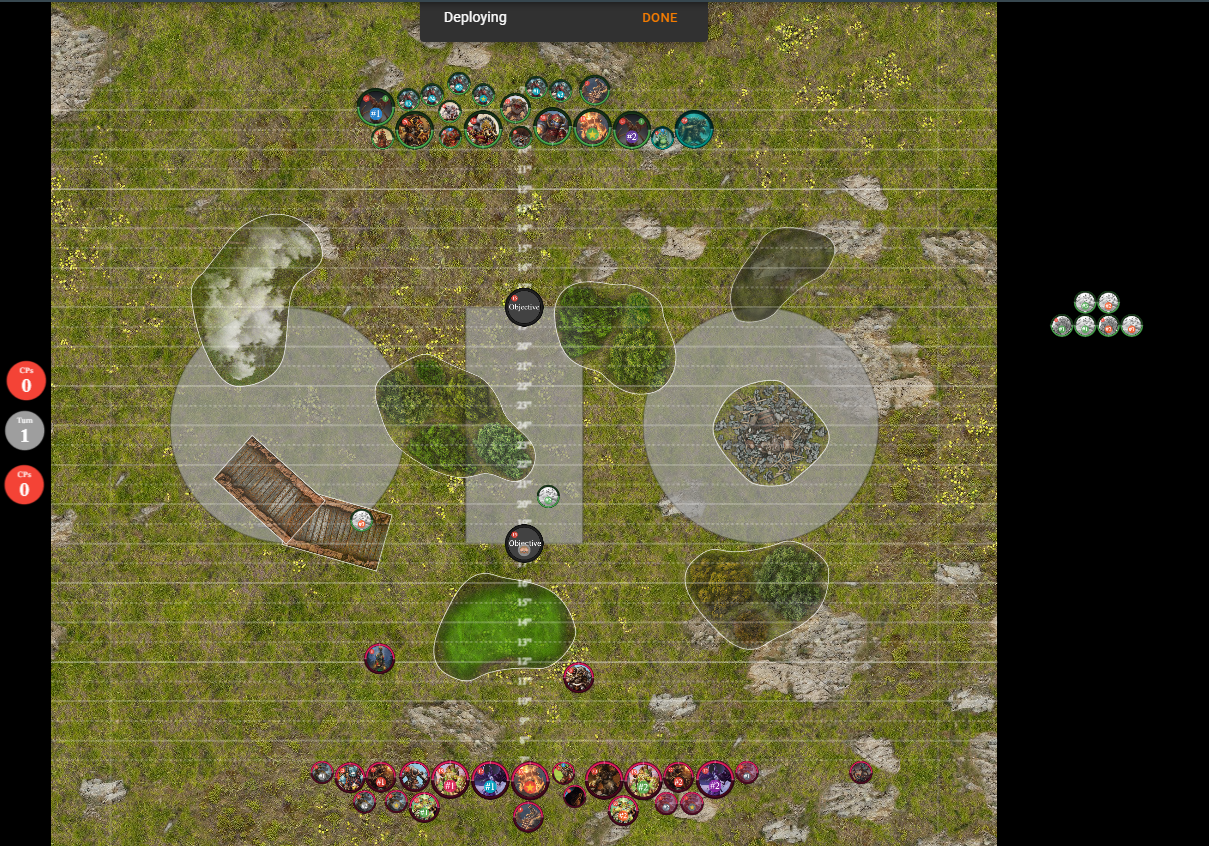 Turn 1a starts with typical running up the board. Azazello throws Storm Rager onto Kogan, who is also the target of Hoof It from Boomhowler3 to get the greatest possible board space to start dictating Michael's positioning. Kogan is set up to stay near to the Observatory objective, with the intention of being able to get through  Zaadesh2's cloud wall next turn, should one be forthcoming (I don't think it will, as it's more likely to be a matter of getting his own upkeeps out, but c'est la vie). Otherwise, bar a Wind Rush forwards, nothing else of note happens. 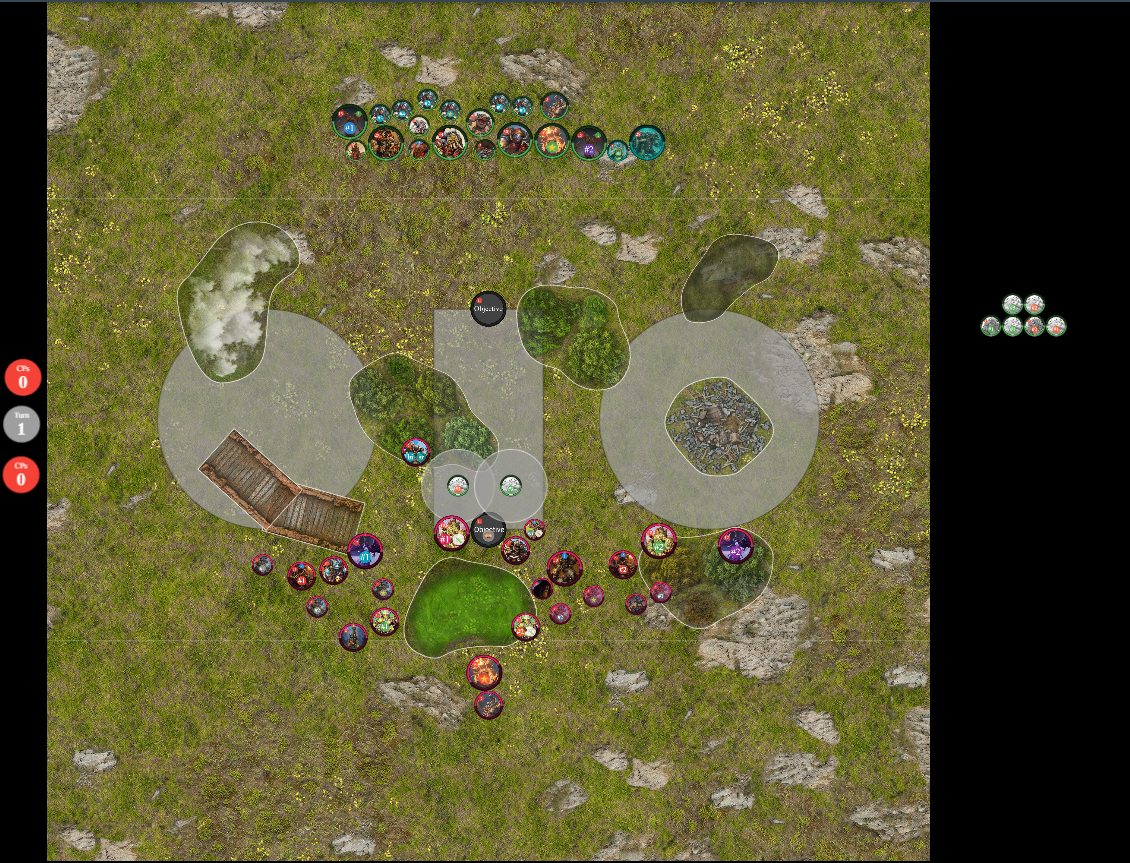 Michael starts turn 1b with immediate aggression, moving up the Cannoneer to pop a shot straight into Azazello, putting a huge chunk of damage into him with a lucky blast that, strangely, isn't transferred. Otherwise, it's a cautious turn from Michael. I'm surprised to see a wall of Burning Ash dropped, as I was expecting Inviolable Resolve - a key spell against Kogan - and Battle Charged to be cast. Otherwise, it's just Titans getting into position, in their slow and wombling way. About halfway through the turn, one of the proxy clouds changes from an orange to a green, which I take to signify the use of Caustic Mist instead, and thankfully I do end up seeing an Inviolable Resolve token, which goes on the Bronzeback along with Puissance. 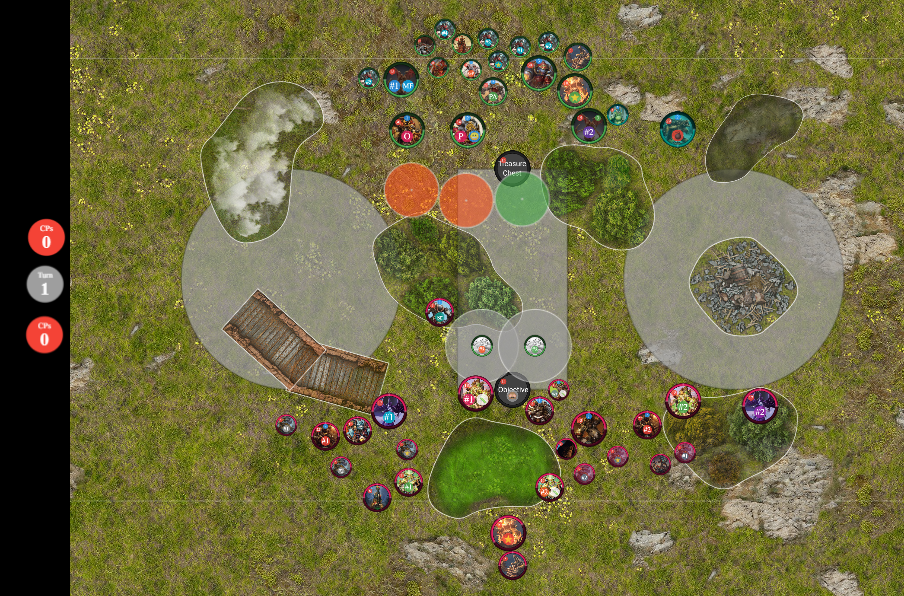 Turn 2a is all about jockeying for position and working around Titan threat ranges, as it isn't really a great turn for Kogan to go in - both his potential targets have ways to mitigate against being slammed, and while Ben could Feat to increase damage output, it'd be a very lonely push as nothing else is really in position to go in yet. A Gun Boar receives Puppet Master to put a cheeky shot into Underchief Mire, also clipping a Death Archon - and cheeky is an understatement, as not only does it get a nice 3 damage onto the Death Archon, but a whopping 15 damage into Mire, which is promptly transferred to his Ironback Spitter. Fortunately, a 2 camp means that further Wind Rush-based cheekiness for a gunshot is kind of pushing it, Meanwhile, Ben comes to the conclusion that he doesn't need to move up too much, so the rest of the turn is just the standard melee list top of 2 positional dance. Of note is that quite a bit of time goes into this turn, but to be fair there was some weighing up of whether to go in. Azazello wisely decides to begin the healing process while things are quiet, burning Fury to get some boxes back. Finally, a neat little formation is set up on the right flank with a Primal Archon to avoid any Spectral Lash plays going off, and Ben passes the turn.

Michael kicks off 2b by continuing the artillery duel between the Gun Boar and the Ironback Spitter, with the latter chunking the former in response. The Cannoneer begins shooting the Observatory, but Ben has positioned his Valkyries to make this very slow going, and promptly uses a Shield Guard chain to net himself some souls on his Void Archon. A Titan Sentry moves to contest the left hand zone, but mistakes a proxied Burning Ash for one that's in play, triggering a Countercharge from a Primal Archon, which Ben chooses not to take after some consideration as it's basically just free stuff for Michael to kill. Otherwise, it looks like Michael is angling for a leftward push in general under Mortal Fear - a bit of an iffy situation, but to be fair, it would be too difficult for him to get at the right side, so maybe he's just decided that it's the best of a bad situation, which I can get behind - Ben will need to set up a pretty good turn to break the brick, and I suppose that if I'm being fair this is about as limited a commitment as one can get from a Titan herd. The clock is passed with no progress on scenario. 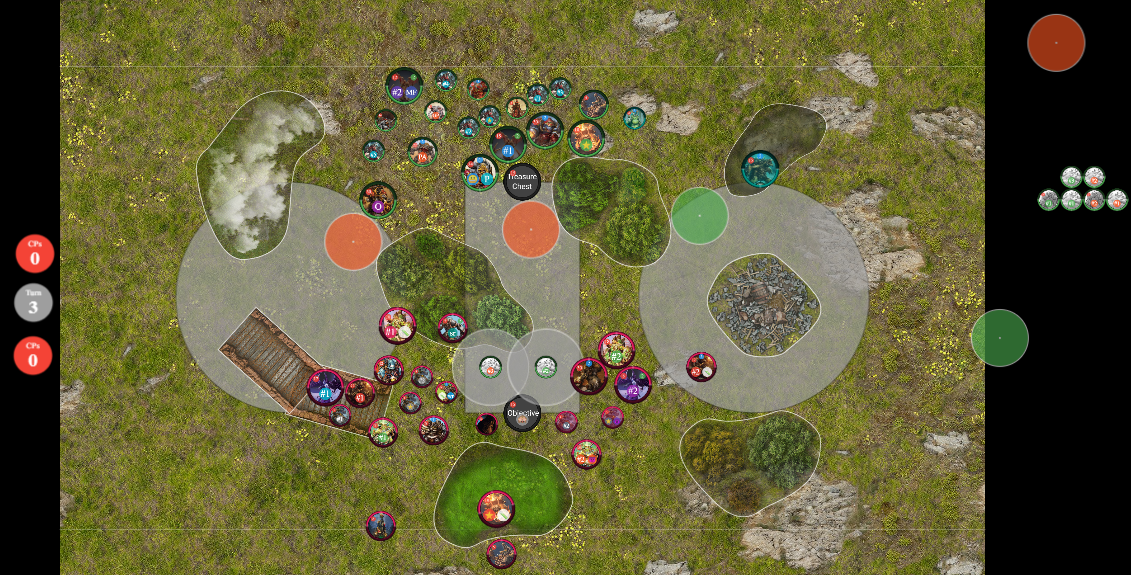 Ben can potentially do a reasonable amount by going in here, so it's time to decide whether turn 3a is the Feat turn or not. Immediately, a spot is found where Kogan can play squash with a Death Archon, and an opportunity exists to Beacon the Bronzeback so that it gets charged by approximately half the world. I must confess to some moderate surprise though, as Ben kicks off with Kogan immediately (after giving him Hoof It), which makes a turn where he Feats and takes 3 heavies off much less likely. The Death Archon is mullered, and the Bronzeback is knocked down, but that's it. Ben then goes into a rather cautious turn, which surprises me greatly, especially because Kogan's Hoof It move is proxied out in a way that kind of leaves him out to dry a bit. Ben is really taking a lot of clock here, and the only other bright spot of the turn is the Gun Boar once again absolutely pounding the Ironback Spitter with some godly dice. 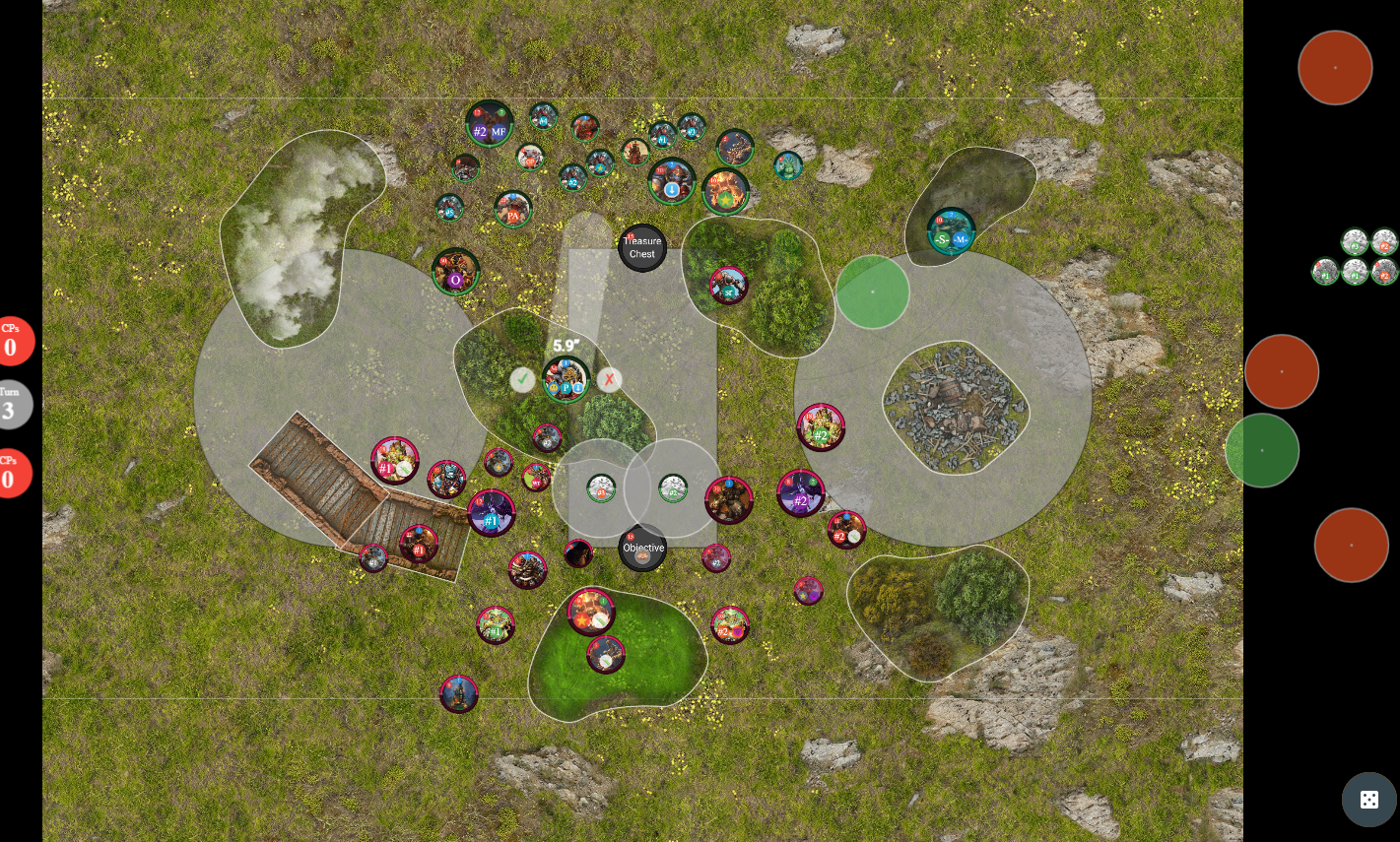 Going into 3b, Michael thinks he's spotted an assassination run, by throwing a Valkyrie at Azazello and beating him to death through transfers and Mad Visions, which he says he reckons is his best course of action. There's a lot of worrying about Countercharge from Boomhowler3, which I'm confused about because of the perfectly good Death Archon sat there able to run to engage, but maybe there's a plan for it. The throw goes off, after a learning experience about whether Treasure Chest can be used to reroll collateral damage (it can't), the Titan Sentry goes in. but sadly doesn't manage to get the job done. From there, while  Zaadesh2's Feat is up, it's kind of going through the motions at this point, as now two Titans have been thrown into the blender. which is generally not how one wants things to go in a trading game. Fortunately, this means that we can get back to the real focus of the game, which is the battle of the Gun Boar and the Ironback Spitter. Sadly, Ben commits an act of extreme dishonour and lets a Farrow Valkyrie interfere in this honourable combat, taking the shot instead. Michael clearly wins the moral victory at this point. Memes aside though, bar poor clock management this is pretty much decided at this point, so the turn is passed.

Ben absolutely rinses the Titans, and is on the way to taking off the rest, but Michael sees the way the wind is blowing and concedes, thus allowing both players (and yours truly) to get some quality watchmachine in elsewhere. GGs! 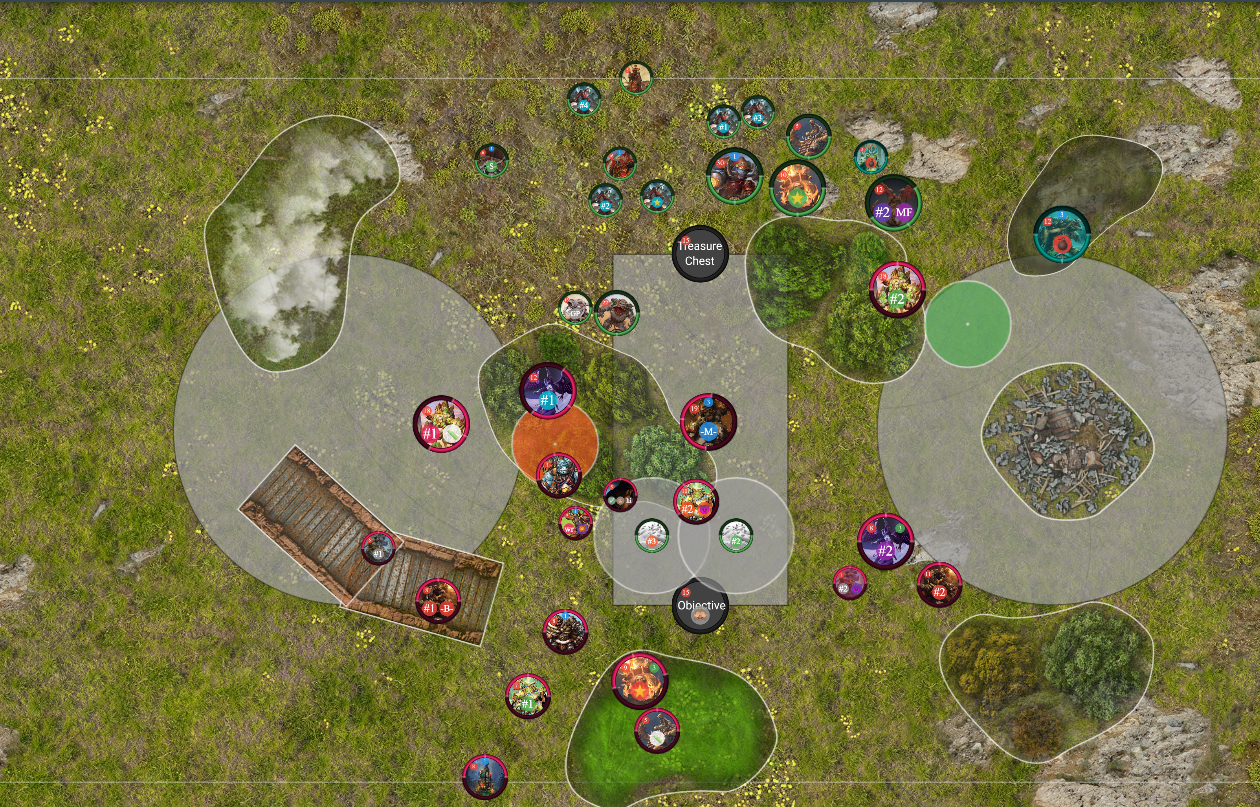