Continuing on our series on the first grudge match of VTC 2021, I was told immediately after sitting down and resting off all that another game was starting, so I launched right into getting it typed up! The matchup this time was Siege vs Bethayne1 on the Turn Up The Heat map - you can find the lists and the map below. 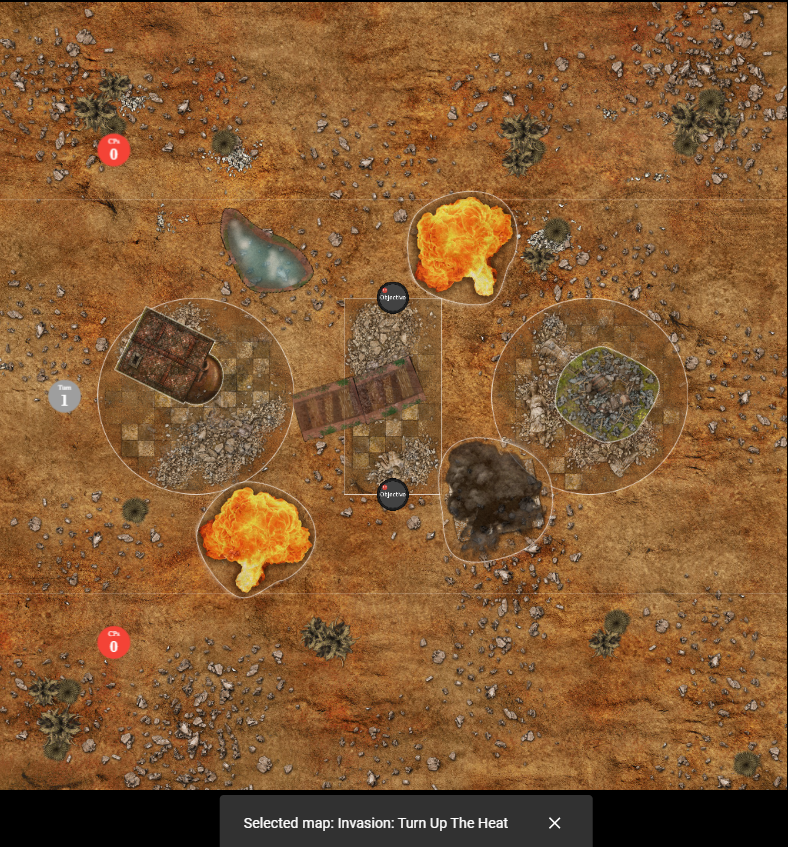 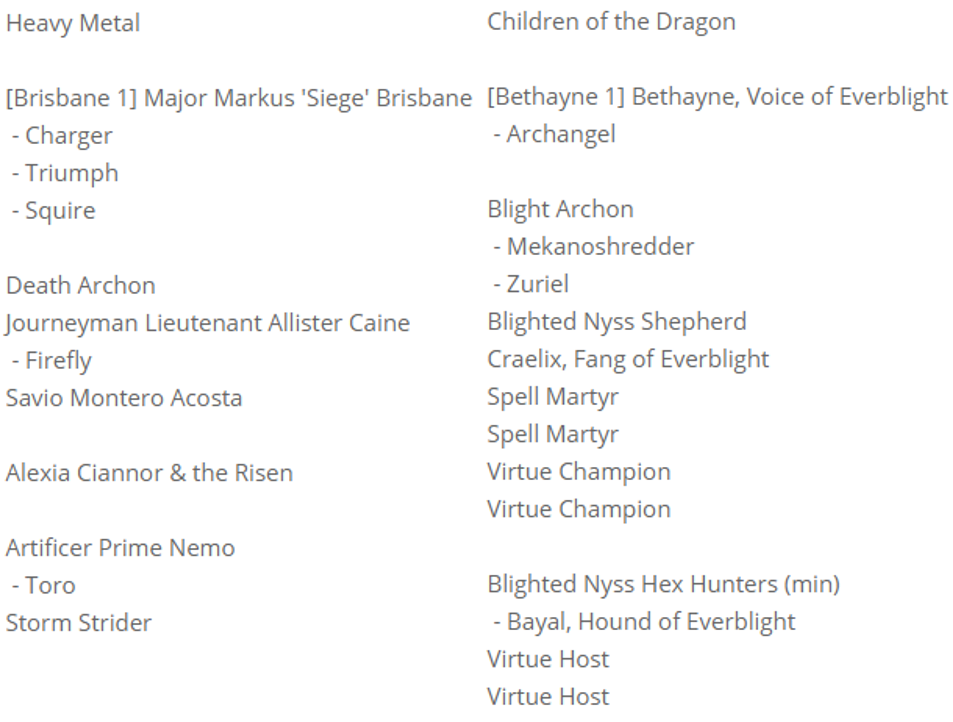 Grant won the starting roll, and chose to take the first turn, with Jan choosing the top side. To counter all of Jan's annoying clouds, Grant picks Observatory, and Jan picks Stockpile because of all the scary guns.

Grant adopts a pretty normal formation for his list, with the Storm Strider taking the left side so that any cheeky contesting models hiding behind the building will be vulnerable to catching some damage from Lightning Generator. Everything mostly clusters in the centre, as the threat ranges on the guns make early positioning much of a muchness. Jan puts his Archangel on the right, across from Nemo4 and the Toro, clearly deciding that shooting and scooting behind the building isn't a game-winning strategy. Zuriel, being much better suited to hiding in a zone and potentially surviving, goes on the left flank, while the Virtue Hosts deploy evenly ensuring that it's pretty easy for Jan to pick up any stray zones, each accompanied by a Virtue Champion. Interestingly, the Hex Hunters also go left, where the Storm Strider is, which puts their survival early game into doubt, but does mean that any survivors could get a cheeky Shadow Bind off against it. 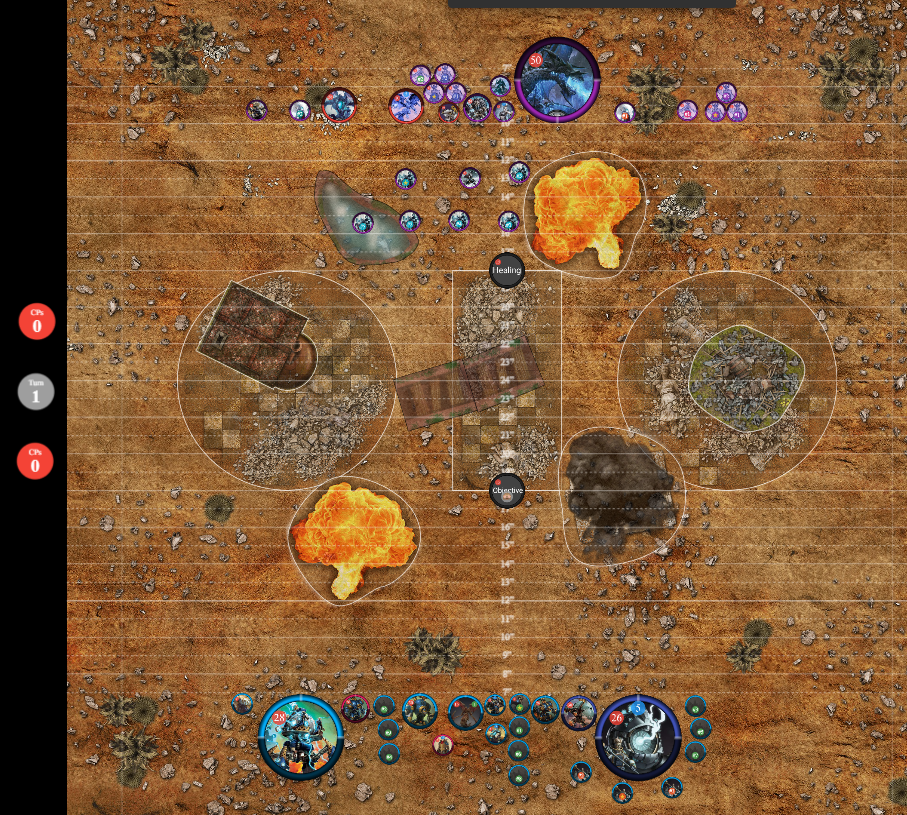 Grant starts the game by running forward and putting upkeeps out; nothing that'll set the world on fire. Except for the part where some of his stuff runs into the burning cloud, which does set part of the world on fire I suppose. A Trench Buster is made, a Foxhole is dropped, and a Thrall Warrior is dropped off at the park by mommy Alexia1. Nemo4 is neatly positioned within 4" of the Observatory, making him a scary threat to anything behind the burning cloud on the right. 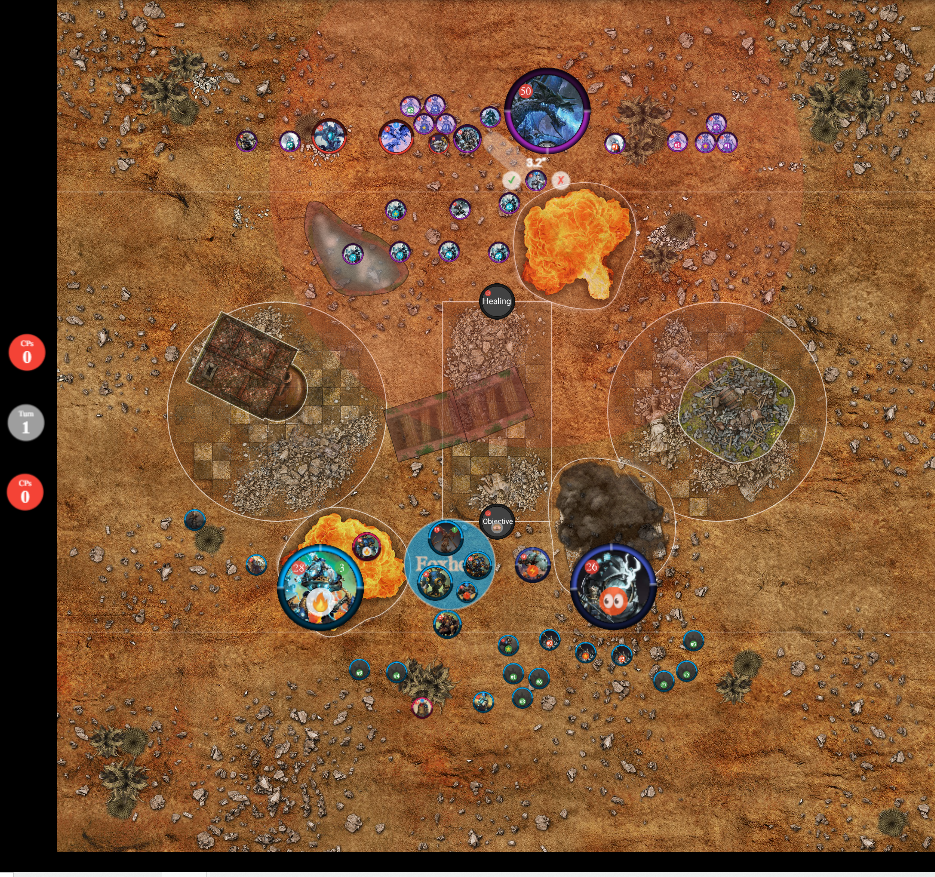 Jan begins his turn by panicking, as do we all really. The Deceleration button is slammed, and Blood Thorn goes on Zuriel (a surprise to me, as I was thinking he might get Dragon's Blood from the Blight Archon); Bethayne1 bravely turtles behind the fire cloud, and the Archangel makes the tragic mistake of getting into melee threat range of the Toro (albeit with Dragon's Blood). Some Hex Hunters run in front to screen, but that only brings them into theat range of the Death Archon. Everything else runs up, but I think that both Grant and I are working out how the Archangel dies here. 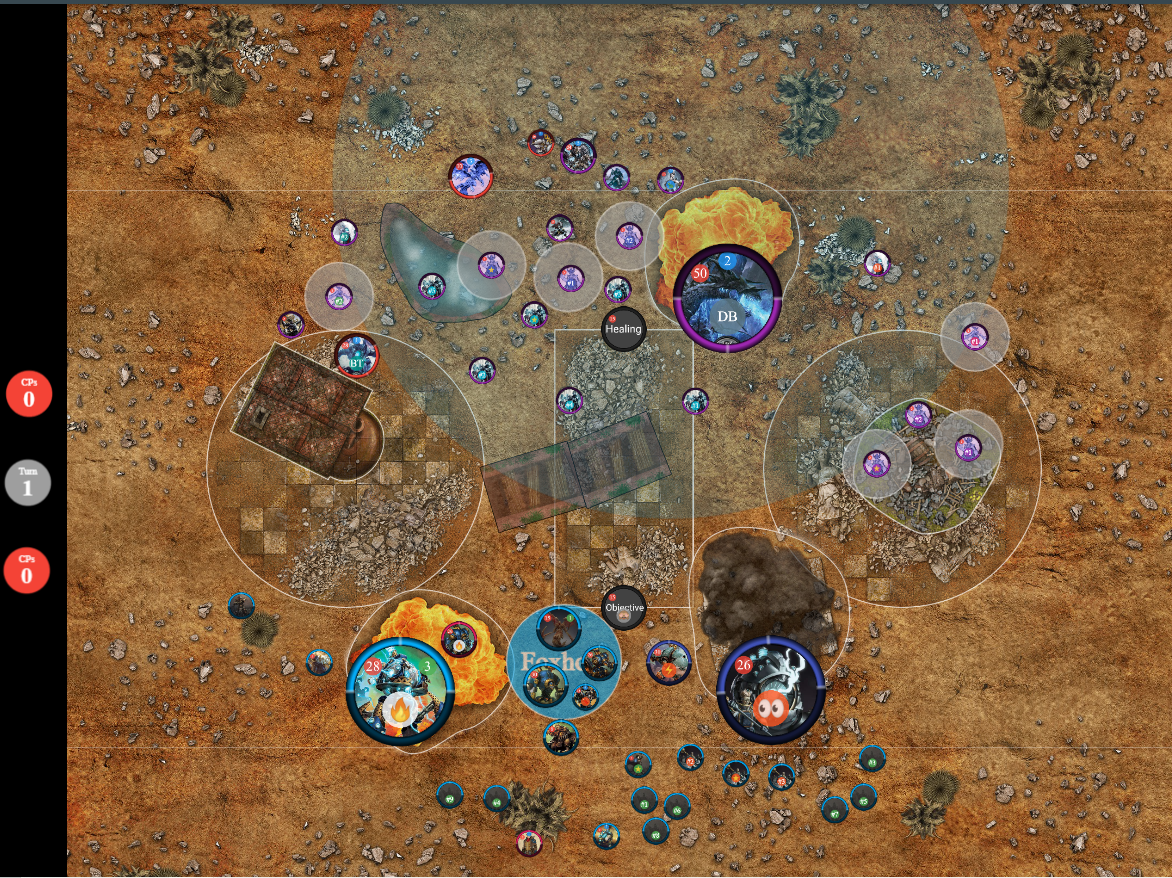 Triumph's opening shot gives the Death Archon a corpse, and Grant begins his calculations. Jan would like me to note here that the fact that a Ground Pounder can hit a model that isn't *on* the ground is bullshit, and I can't say no to him. Watcher drops, Foxhole and Lightning Shroud stay up, and it's go time. The Toro and Nemo4 tear chunks out of the Archangel under Feat, and some chip from elsewhere leaves it on 10, but crucially Grant doesn't put up Annihilator before charging with the Death Archon and so it doesn't get the Spectral Flicker into melee. As such, it now gets to survive and absolutely live the dream. Triumph fails to snipe out Bayal to put a sad footnote on a pretty sad turn. 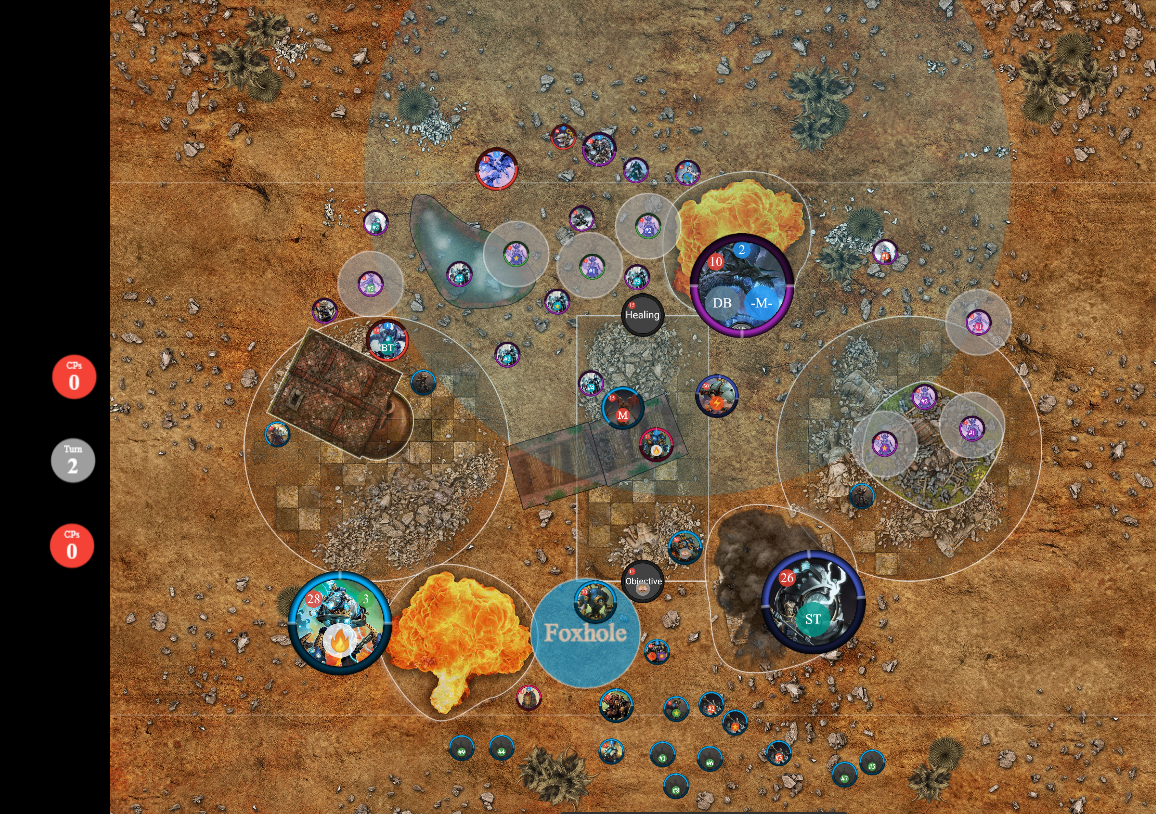 The Hex Hunters cackle with glee and Apparition into prime Shadow Bind application spots, and Jan gets ready to start his turn. It starts in stellar fashion with Zuriel eating 7 damage from a Thrall Warrior's free strike for exactly no reason, giving me a good chuckle. It does however eat the Death Archon and cripple the Firefly. I was however ordered to note down the following.

Jan sets up for his Feat turn, briefly adopting a Russian accent for reasons unknowable to mankind. Nemo4 gets absolutely *chunked* by a Disintegration, then rinsed by a Virtue Host, with the Charger and Firefly falling to bits thereafter. The Archangel merrily flaps off to safety, now manifestly unconcerned about anything killing it, capping off a very rough turn for Grant. The one thing not going in Jan's favour is the clock, though, which is very low. 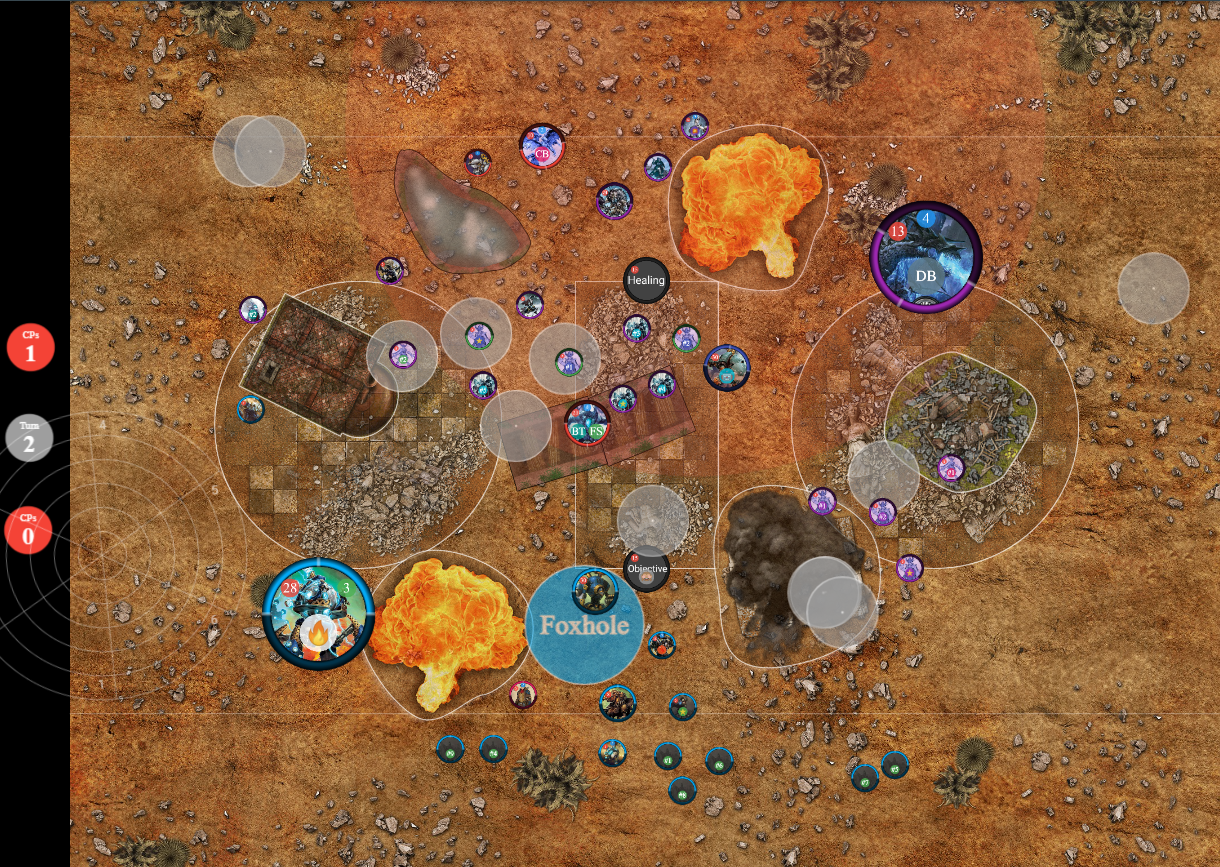 Grant starts weighing up counter-punch options, focusing on clearing the central zone, which he achieves. Zuriel is removed in short order, as is the Stockpile, but a decent chunk of infantry is left standing and the right hand zone is uncontested. As such, the best that Grant can do is bring the game to even on CPs. 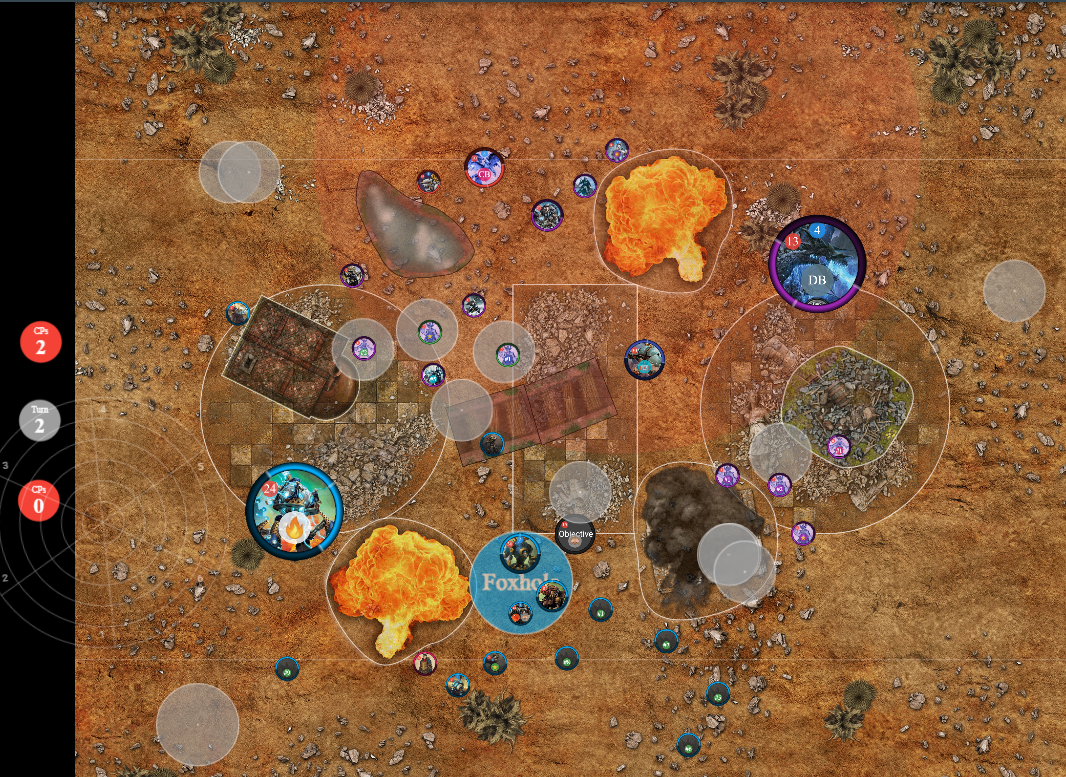 The Storm Strider is at risk now and I think Jan knows it. He goes right in and takes it off with some melee hits and a Disintegration, while the Archangel blows up the Observatory and establishes itself firmly in the central zone with the Blight Archon. I'm not sure about this, as it does put some risk back on the table seeing as it hasn't been healed much, but Jan is very low on time so closing the game out is the priority now. 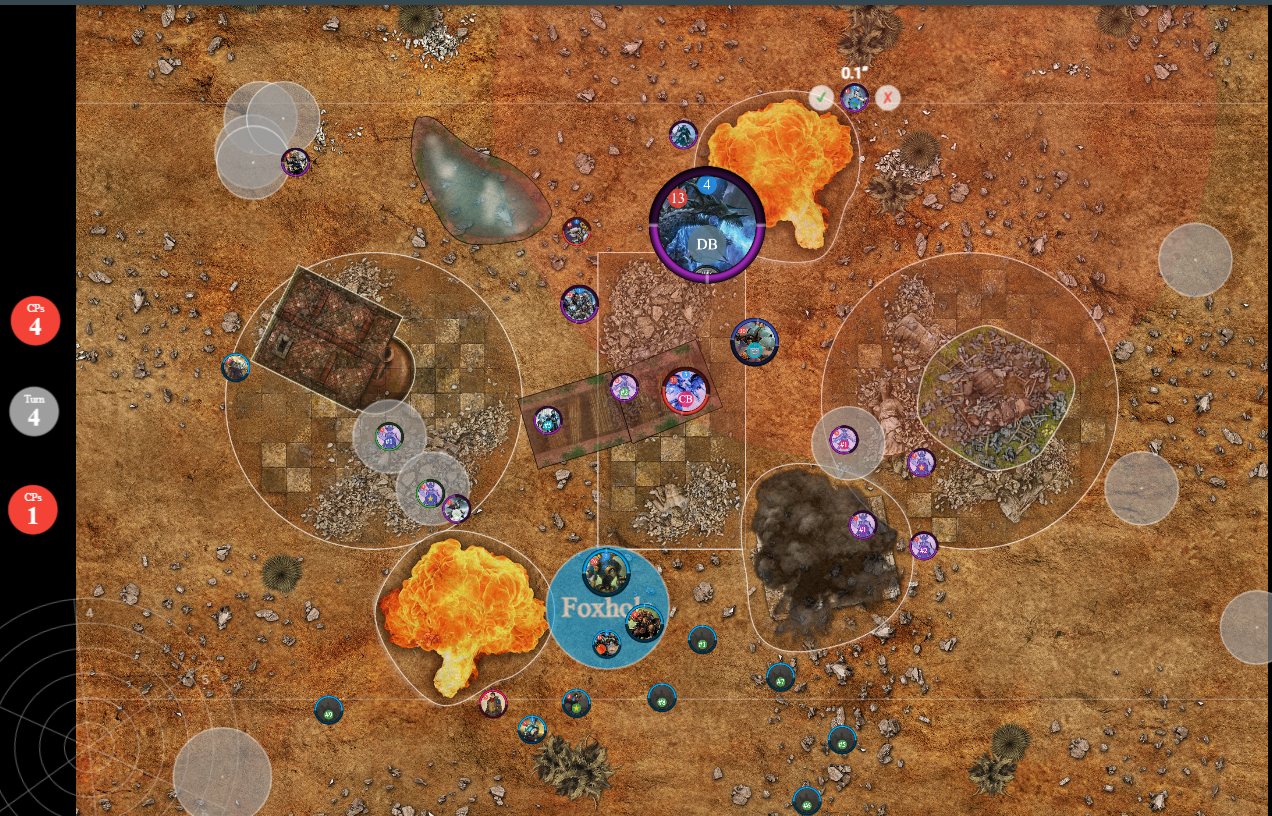 If the Archangel doesn't die, Grant loses, but being 4-1 down means that killing it doesn't guarantee a win. Acosta doesn't really start the turn the right way, as he misses two hard 5s, and is put to shame by Siege getting stuck into melee with a Virtue Host. The various Solos go off to do some killing, clearing out as much as they can, and keeping Grant relevant on scenario, but ultimately what matters is that the Archangel lives. 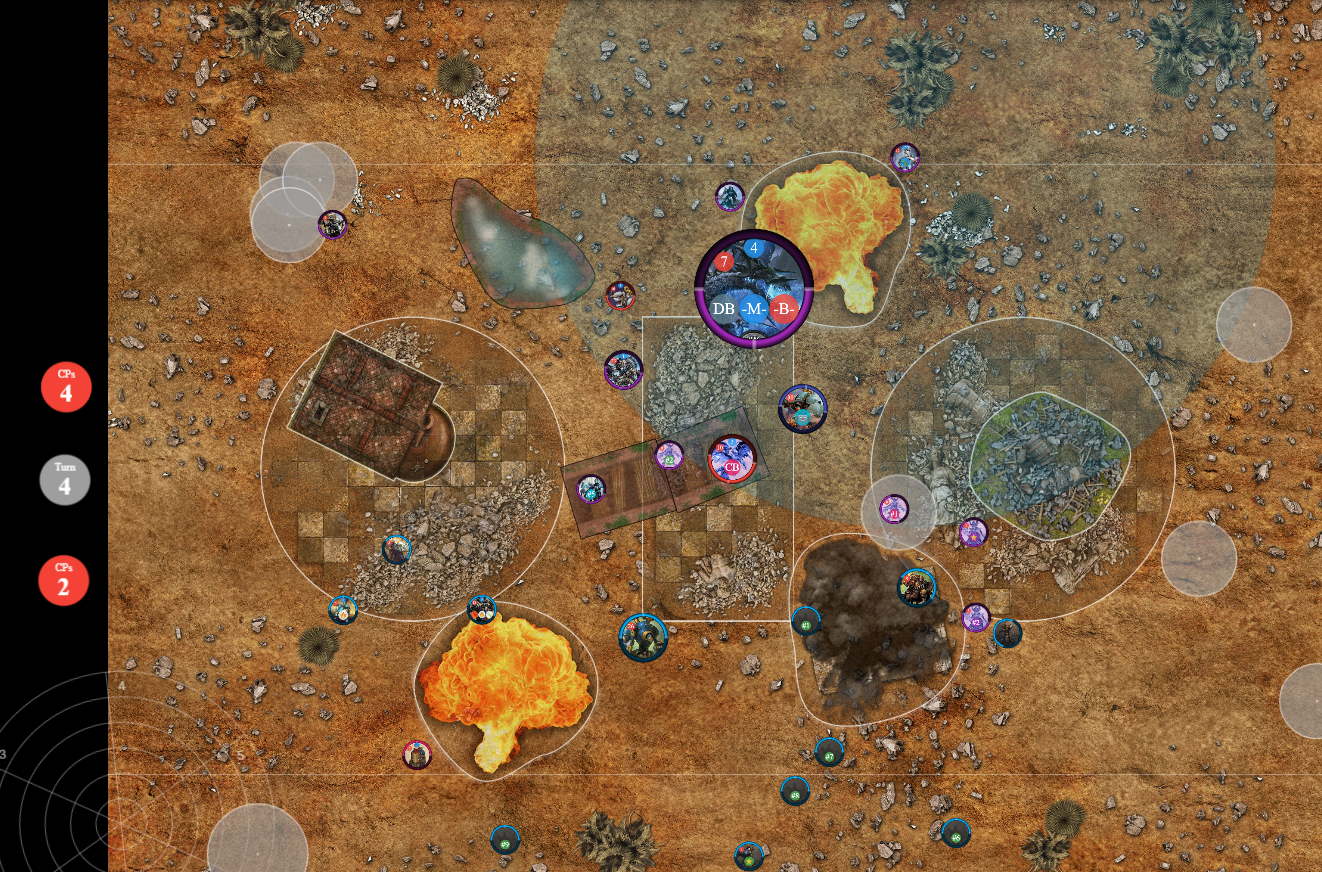 Jan has a couple of options for closing the game out, and chooses assassination. Weaken is applied, and Siege is unceremoniously nommed. GG! 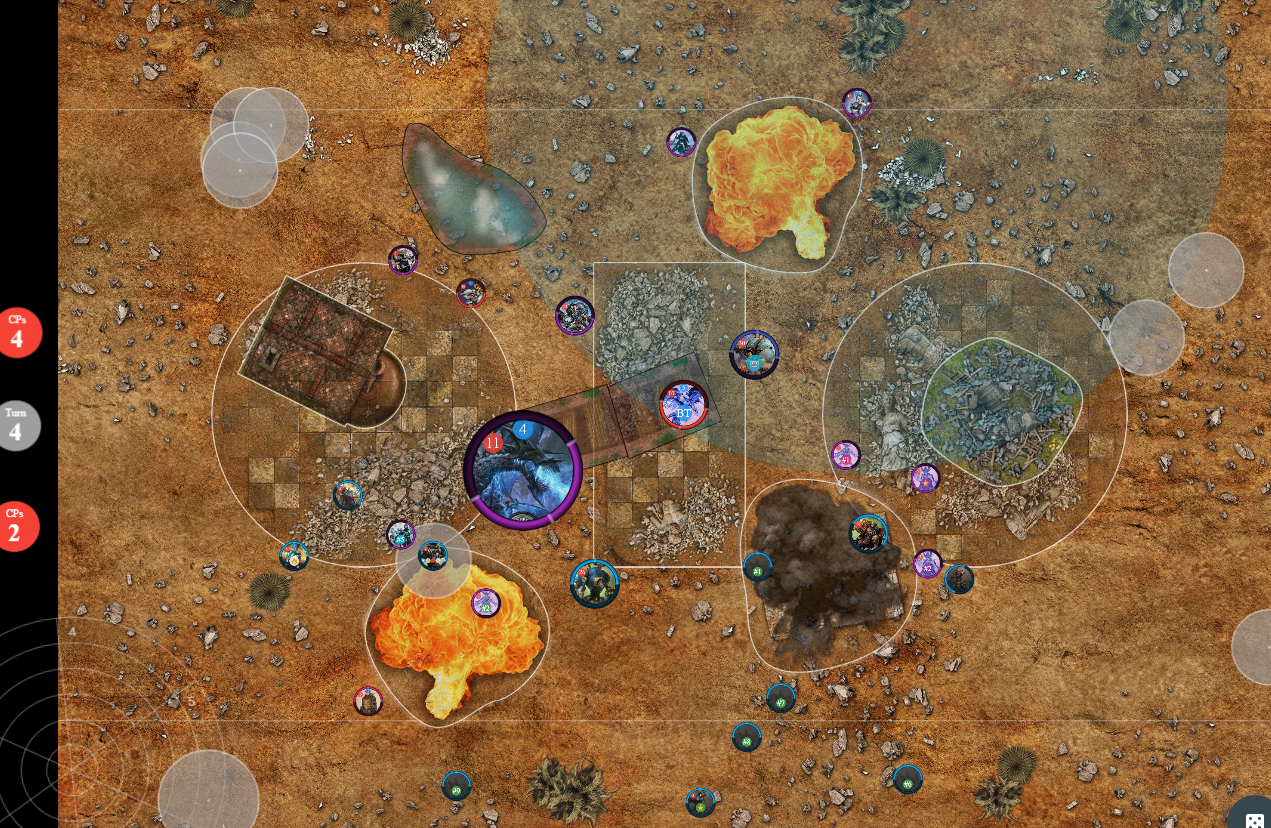