There I was, minding my own business after a hard day's typing terrible articles, when I was suddenly DM'd by Brad Park of All Gas No Brakes. Turns out, there's a bit of a grudge match dealio going on between his mob and South Africa Tokoloshe, and he kindly invited me to spectate the pairing process. It would have been a really nice opportunity to see how to new format impacted player decisions... so naturally I fell asleep before they started.

Fortunately, I was awake to watch the first game of the 'round', and the players very kindly agreed to let me watchmachine and turn it into a battle report. Thanks chaps! The matchup in this case was Azazello vs Dreamer on the Time and Tide map - you can find the lists and the map below. You'll notice that the players changed the default background just for viewability, which is fine by me :) 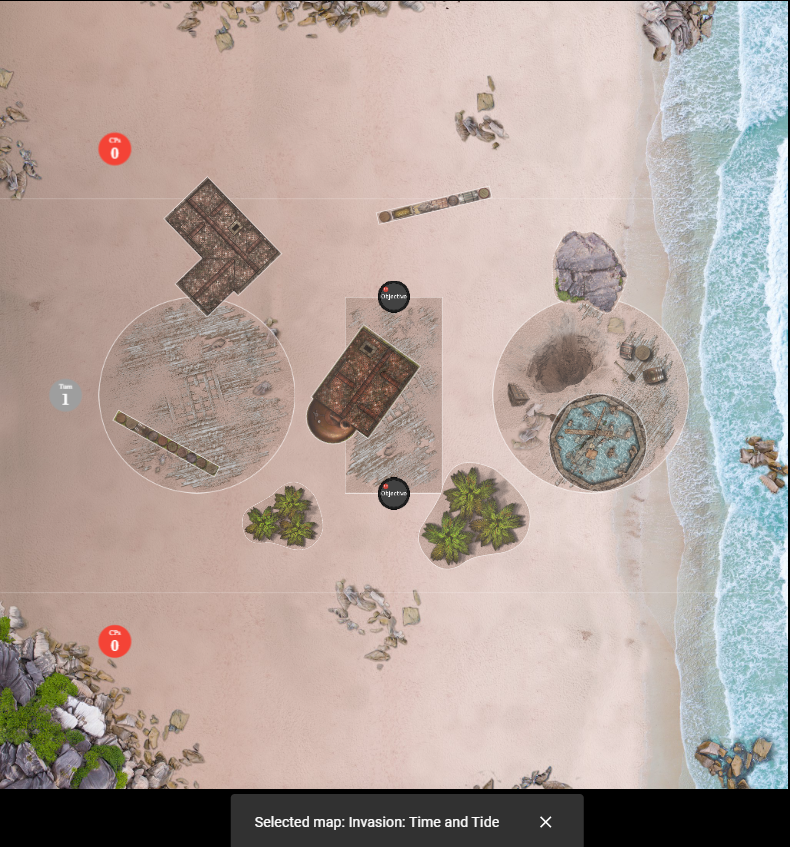 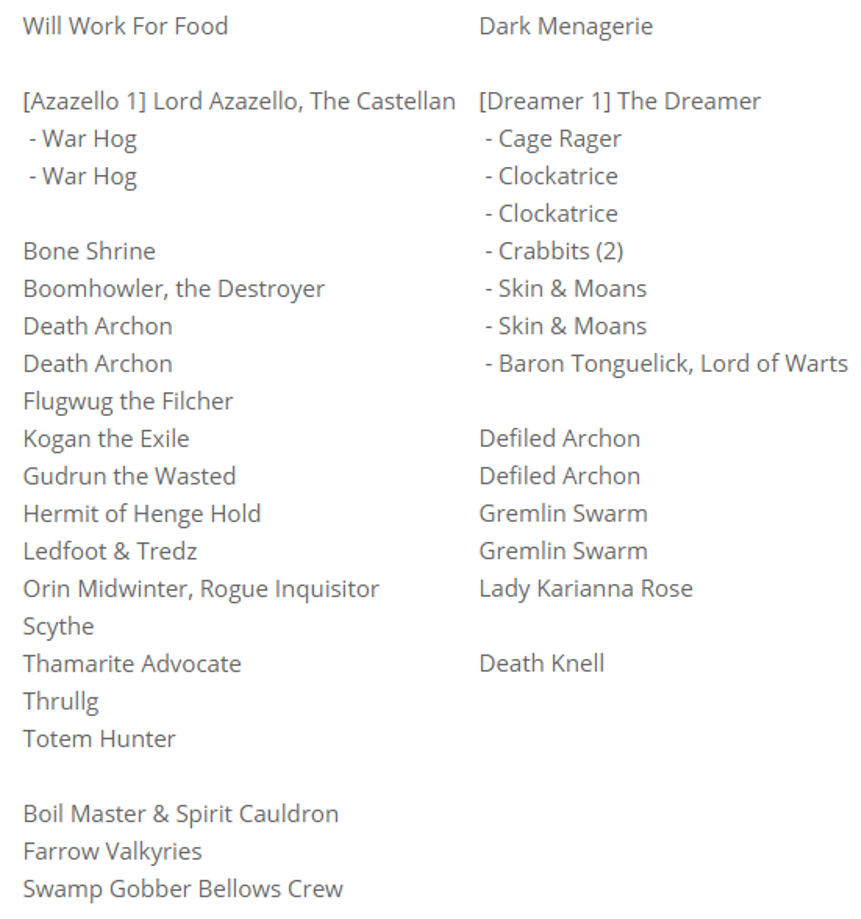 Brad won the starting roll and chose to go first, with Evan choosing the bottom side in response. They chose Fuel Cache and Treasure Chest as their Objectives respectively. The Arcana picks were the traditional combination of Labyrinth (always good into a melee-heavy list, although there might be an argument for Ruin here to screw over Azazello) and Sacrifice.

Brad's deployment was fairly standard and mirrored, with a slight leftward skew for the big pieces. Scythe took the side with the biggest forest, as is tradition, and the Henchmen unit of Valkyries looked to contest the right hand side of the board. Traditionally, Invasion is a scenario where Dreamer doesn't actually get to score many Control Points if the central zone is difficult to clear, and the central building definitely made it so. As such, this setup broadly made sense, as it was likely going to be attrition rather than any big scenario push that would carry the day.

In response, Evan skewed left as well, but to a much more significant degree. Again, a pretty standard response to the table, and with the hyper-mobile Defiled Archons on the right, it didn't look like it would be too difficult for Dreamer to pivot rapidly if Brad made any adjustments to his push. The Death Knell getting to bunker up behind the building also put it in a fairly safe position against Brad's mostly melee-based army. Prey went on Clockatrice #2, and away they went! 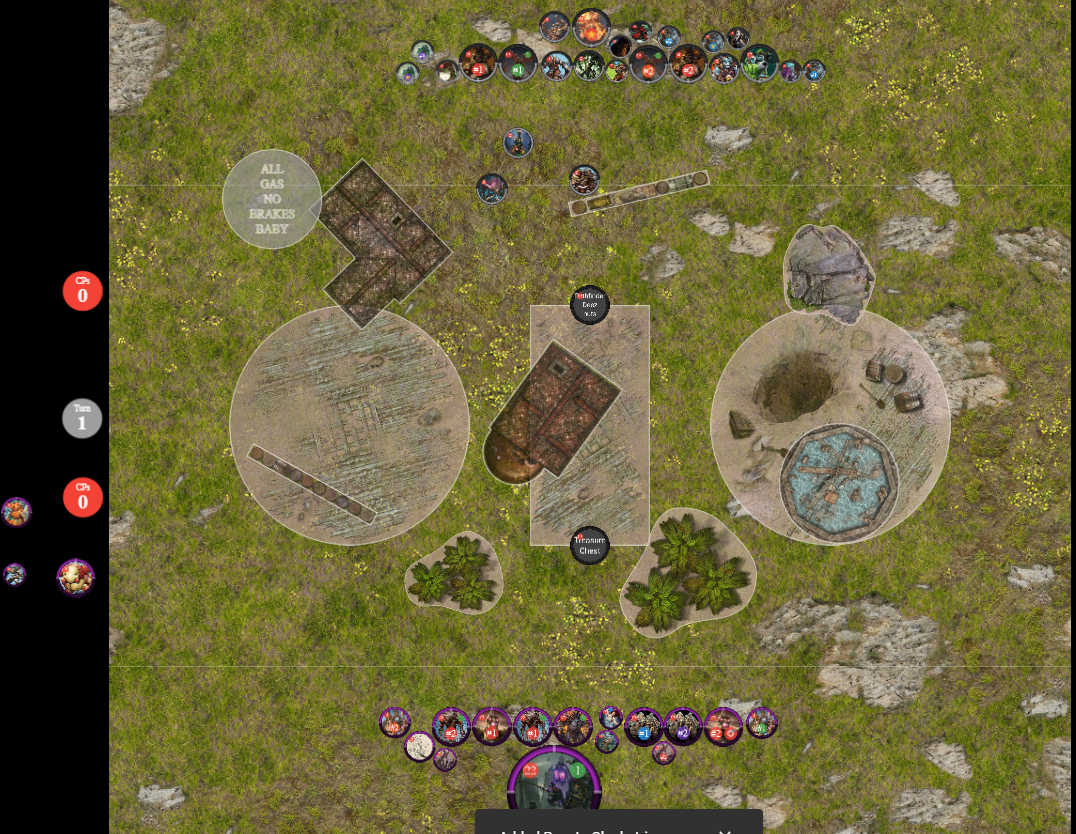 Brad's opening is pretty standard fare. Storm Rager goes on the Totem Hunter to threaten some early damage, followed by a quick Wind Rush to push up the table. A fortunate 3 on the Cauldron means that Death Archon #1 gets fully fuelled, and the list commences pounding its way rapidly forward towards the Grymkin line. Interestingly, a few pieces switch over to the right, which I would have thought might not be the choice because of the Defiled Archons sat there waiting to pick up a few kills, but for the results of that play, I would have to wait a few turns. 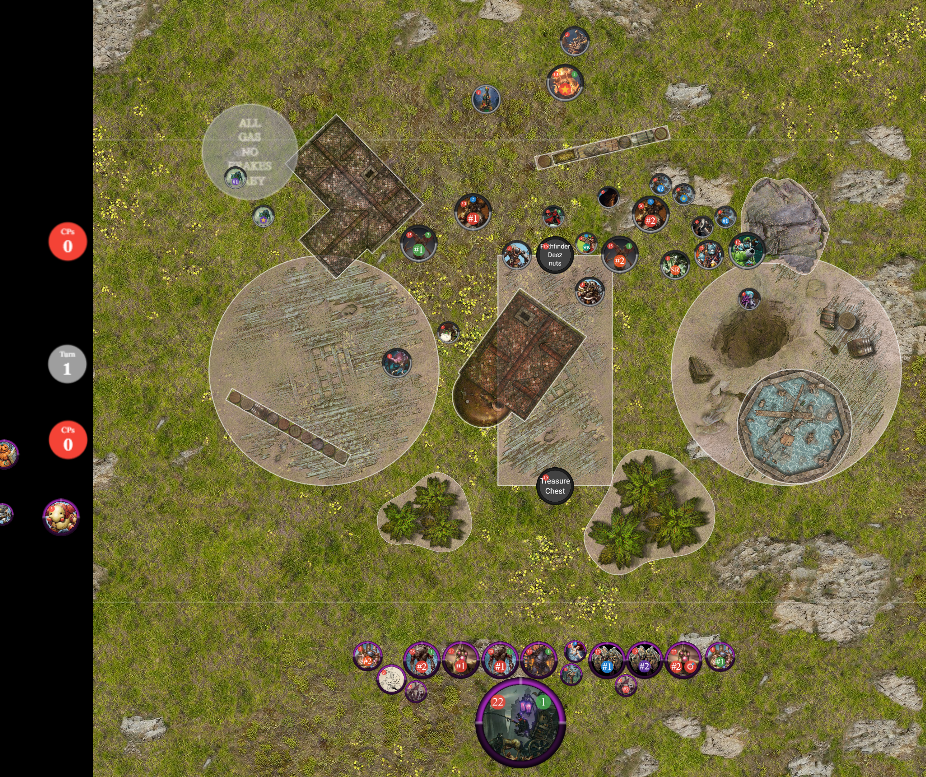 Evan's turn 1 was naturally slow and cautious - he mentioned early on that taking it on the chin was going to be necessary at some point, and set up accordingly. A lot of the focus of this turn wasn't in staying out of threat ranges, which could well have made a dead scenario live in later turns by forcing the line of engagement back, but rather in mitigation, such as taking Beacon out of serious consideration through the use of Crabbits, Artifice of Deviation, and Concealment to stack the odds against it landing. A conservative beginning leads to just a few pieces being in threat range, but no meaningful alpha is available just yet. 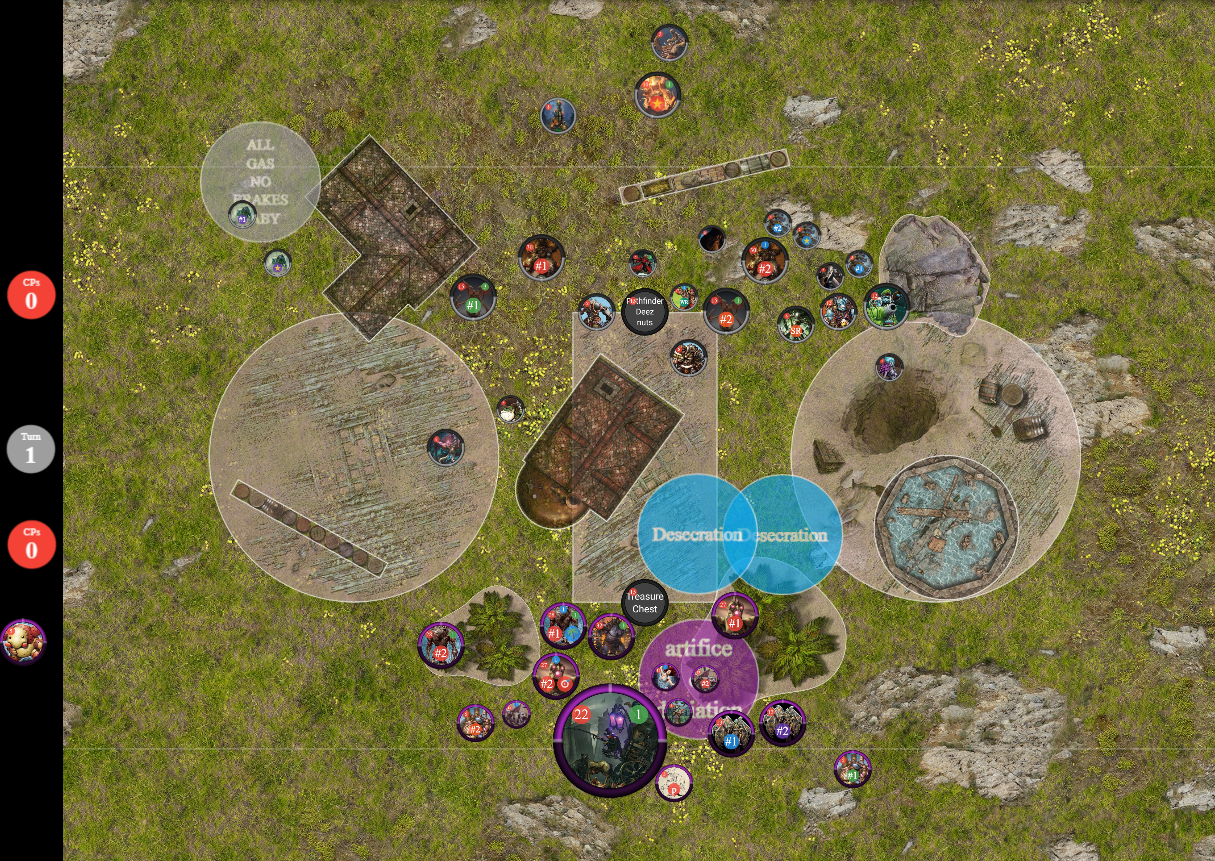 Brad opens by launching into a Scythe activation - she aims and takes 9 points off a Clockatrice over 4 shots, with Evan saving his Shield Guard for any Beacon shooting as mentioned previously. The Thrullg follows up by charging the Skin and Moans with Mirage on it, knocking that off, and Evan responds by popping Labyrinth to catch Brad's forward line. A cheeky Beacon shot is thrown off to try and get some damage on a Crabbit for later, but it misses. The rest of the turn thus becomes about posturing again, negating Evan's use of his Arcana - honestly, I don't think there was much risk of things going in this turn anyway, and now Brad can proceed into future turns with confidence. Death Archon #2 is fully fuelled, while Death Archon #1 toddles off to find a position where Abyssal Gate can't put it into threat range of a heavy, while also keeping it threatening for the entire left hand zone. The Bellows Crew adopt body-blocking positions to disincentivise an Abyssal Gate on War Hog #1, which does buy it some board presence but risks Brad losing a Unit he can use to score that zone. The turn ends without major incident. 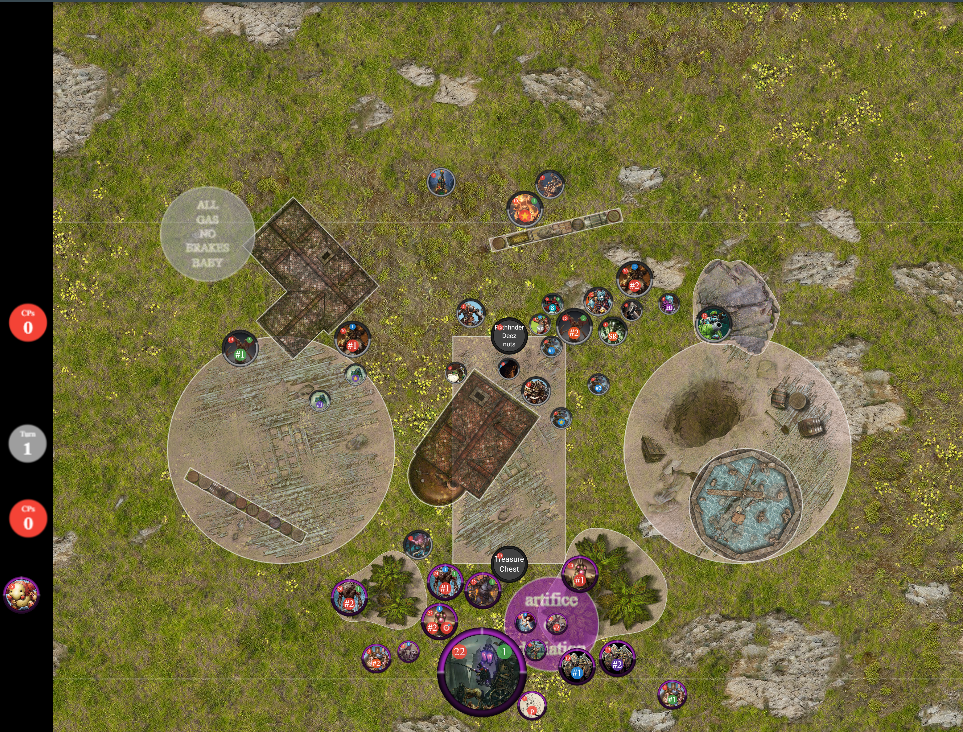 Evan's turn begins with some threat range questions, and a bit of cheeky Arcane Consumption damage on the Skin and Moans that was finishing off the Thrullg (as it needed Lurker to get to the position it wanted). The Defiled Archons and a Clockatrice begin sandpapering the right flank, which can charitably be described as a target-rich environment, and take off Gudrun2 and the Valkyries. Brad does have protection for his more important pieces in the form of the Hermit and Orin1, but that's not infinite and he's going to have to go in sooner or later. Interestingly though, a fair bit of pushing happens, with a slightly alarming number of heavies now in threat range. The question has thus become whether enough damage can go through with Sacrifice on the table, and Evan ends his turn having posed an interesting dilemma for Brad. 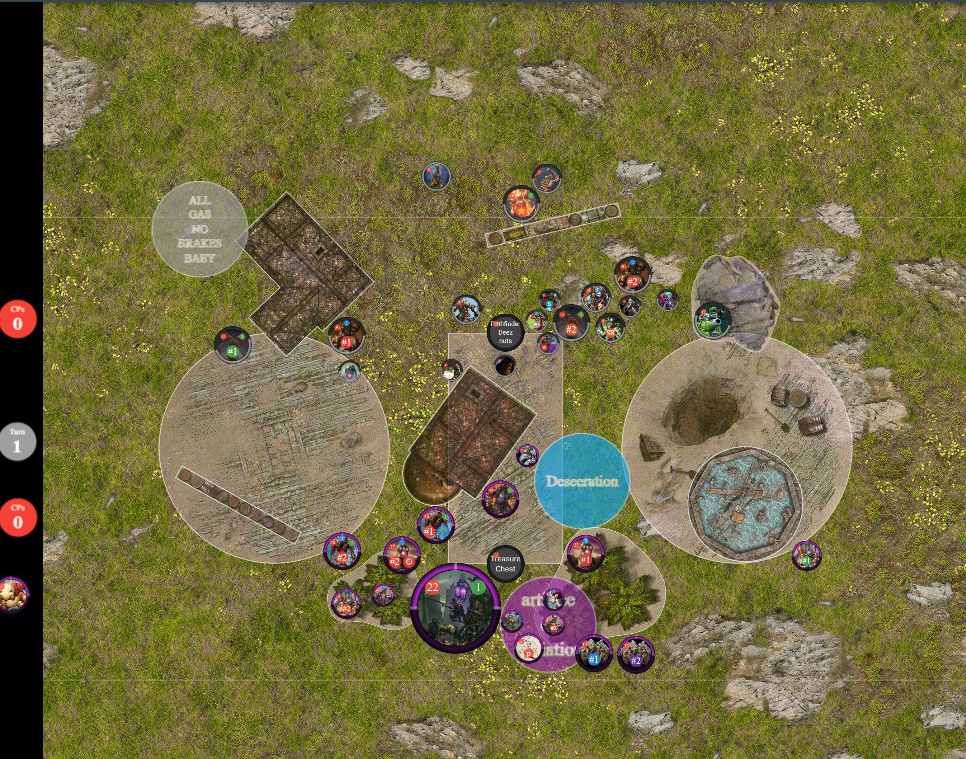 Brad goes hard into the tank in response. It's always interesting watching someone try and plan out a turn into Grymkin, just because of the amount of ways that the Grymkin player can interrupt your execution, and the resultant incentive to think in almost complete silence. The deliberations finally end with Scythe picking off a Phantasm, the Cauldron using Puppet Master on Azazello, and Brad sending the latter in to Beacon the Skin and Moans on the far left - he has correctly identified that even with a Shield Guard from the Crabbit, his Death Archon will still be able to get a mighty couple of swings off on the clump of heavies, and thus he Feats. The Shield Guard should probably have been used, though, as now the War Hog will be able to go in and rumble thanks to its earlier aggro. Said Death Archon then goes in, deciding after a bit of thought to avoid catching the Gremlin Swarm and the Crabbit, and does a ton of damage - ultimately what matters though is that it two-shots the central Skin and Moans, triggering Sacrifice very early. However, as there was a discussion earlier about what can get in, and a mistaken understanding that the Beacon's target didn't actually 'matter', so to speak, Brad sportingly decides not to send his War Hog in. The other Death Archon, not to be outdone, throws a ton of damage around in the centre, nailing Spirit on the Cage Rager to make the Stationary really hurt Evan's retaliation. A poorly judged Time Stutter means that the Totem Hunter gets to pick up the right hand Clockatrice, turning a bad situation into a really bad one, with an effective three Heavies out of action. However, Brad makes a couple of potentially exploitable mistakes - the right hand War Hog is far enough away from the Fuel Cache that Artifice of Deviation could be a real problem, and the same applies to Boomhowler3. Not world-ending, to be sure, but potentially the beginnings of a recovery play for Evan. 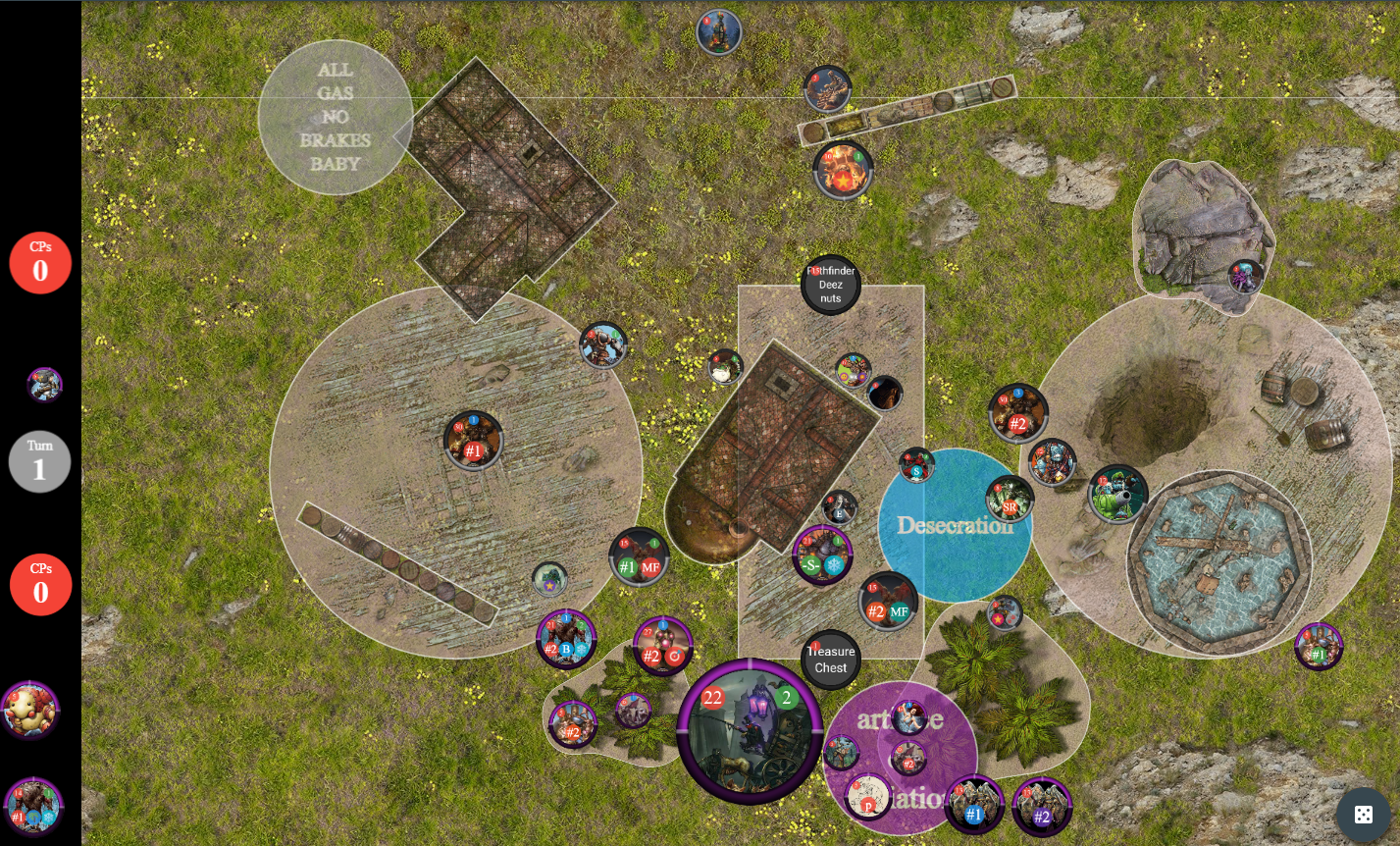 Dreamer starts the turn by going Incorporeal, and deeply wishing that the Death Archon wasn't engaging her. Parlay goes up and she makes a brave retreat, putting up Manifest Destiny and praying to the dice gods. However, the power of the Feat is just too much - with a couple of misses on the left hand Death Archon, a fully loaded Skin and Moans ends up taking more damage than it deals, and seeing the writing on the wall, Evan concedes! 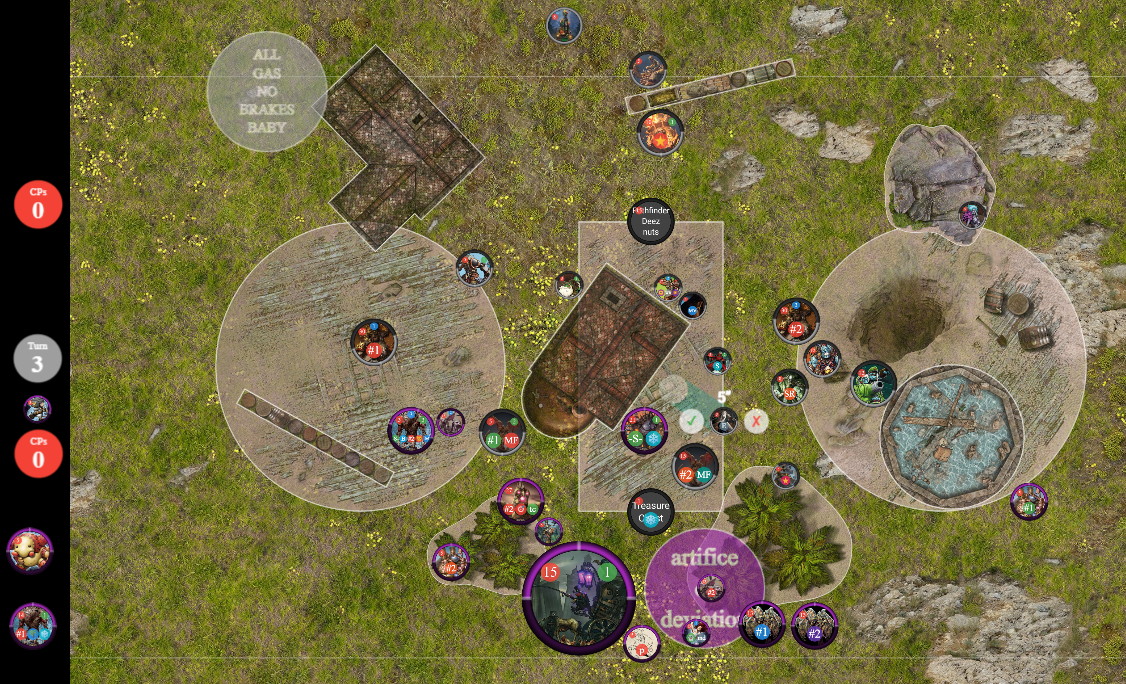