What was the matchup?

What were the lists?

We settled on our matchup quite a large amount of time in advance after looking at each others' pairings. I have no interest in playing Syvestro, and Harrison considers Krueger2 the Stormlord to be a solid drop into my lists, which is an assessment that I thoroughly agree with. All the better though, as a challenge is how one learns :)

Harrison won the rolloff, and elected to go first so as to take board space and avoid being ran at by a lot of scary guns . As such, I chose the top side, in order to avoid having to deal with the building in the right hand circular zone. I also wished to use the building in the left hand circular zone to try and hide some of my key pieces. Fail Safe is put on a Toro using the Prima Materia benefit. 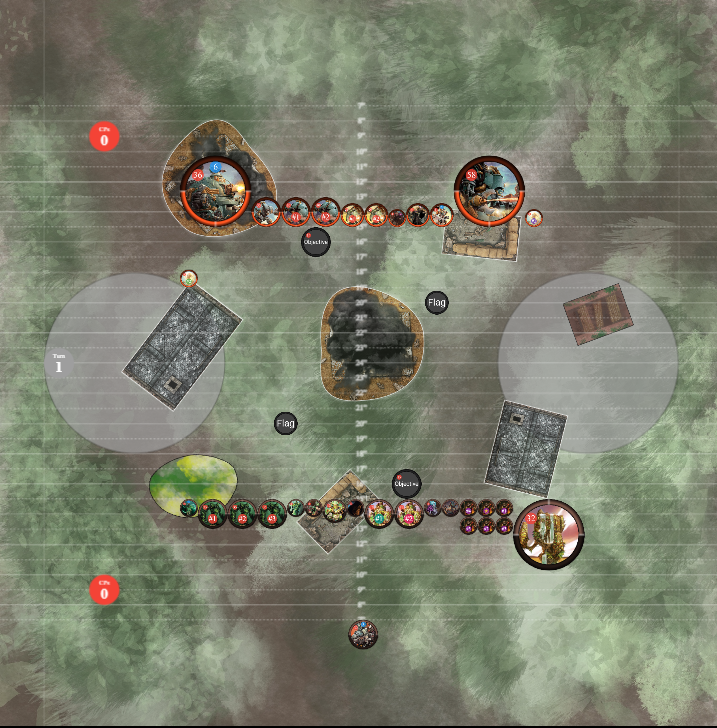 Harrison takes a cautious approach in which threat ranges are avoided, and the right hand zone is threatened by the Slaughterhousers. The left hand zone is left conspicuously devoid of likely scoring units beyond a hard left swing from Krueger2. A Wayfarer is spawned by the Well to project some spooky threat ranges. 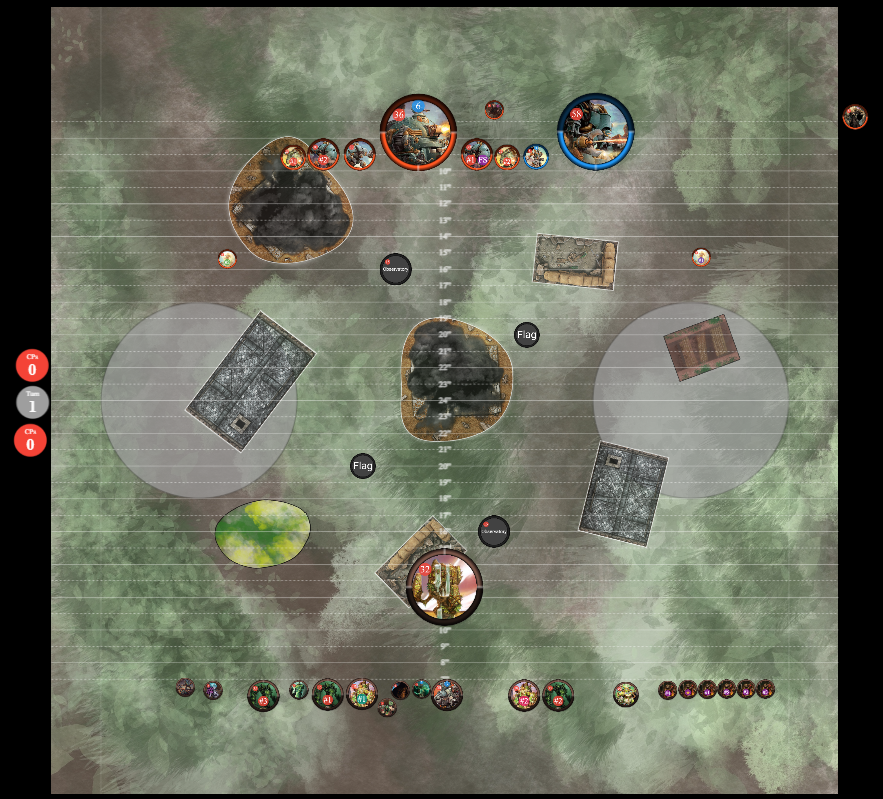 Mackay's army advances cautiously, with the exception of the Vulcan, which feels relatively safe owing to the building denying any good spots for the Heavies on Harrison's side to threaten it. The Vanguards are designated as a sacrificial screen for the Toros, but not one of great import beyond a slight impact on Fury efficiency for Harrison. I lack a great deal of spell protection, so I have to do the best I can. My intention is to leave a nice lane open for Mackay to push up aggressively for a potential Feat on Turn 2, while also keeping her relatively safe, and as such my positioning is about as cautious as Harrison's. 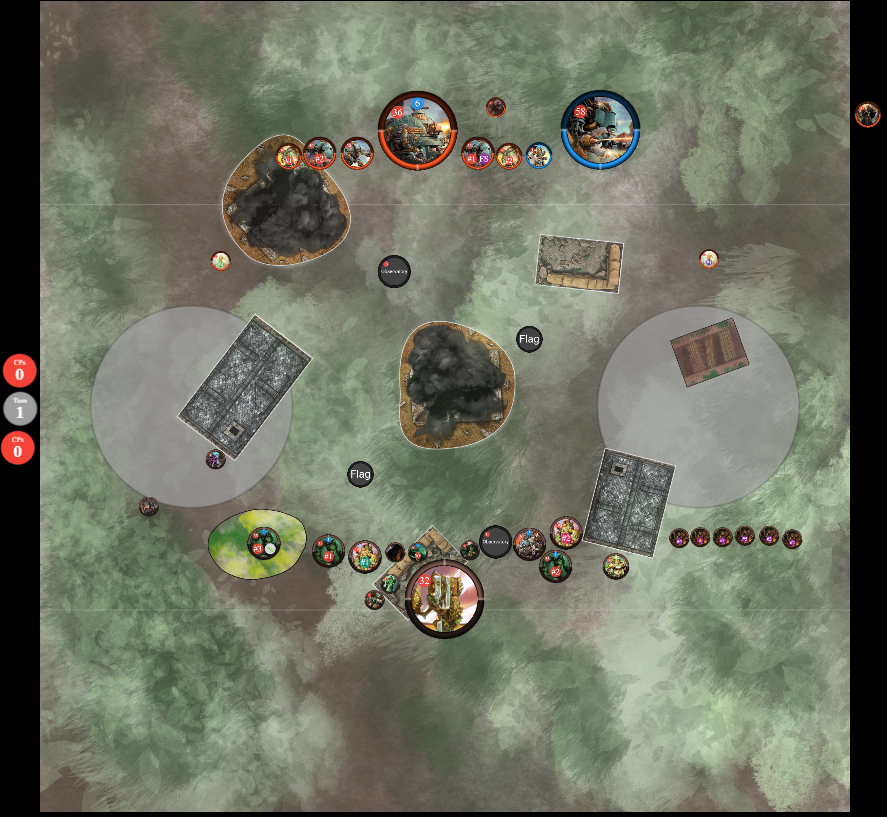 I forget to take a picture at the end of this turn, so the only one I have is midway through 2B, because I'm an amateur; deal with it. Between Scythe and a Primal Archon, one of my Vanguards takes substantial damage, being left on just a few boxes, and the rest of the army adopts relatively cautious positions once again. Crucially, there is no attempt to Feat, and the Stoneshaper has a convenient Hermit of Henge Hold positioned for Sacrificial Pawn use if needed. There are now Primal Archons in my face, and I need to deal with them without opening myself for a big hit. 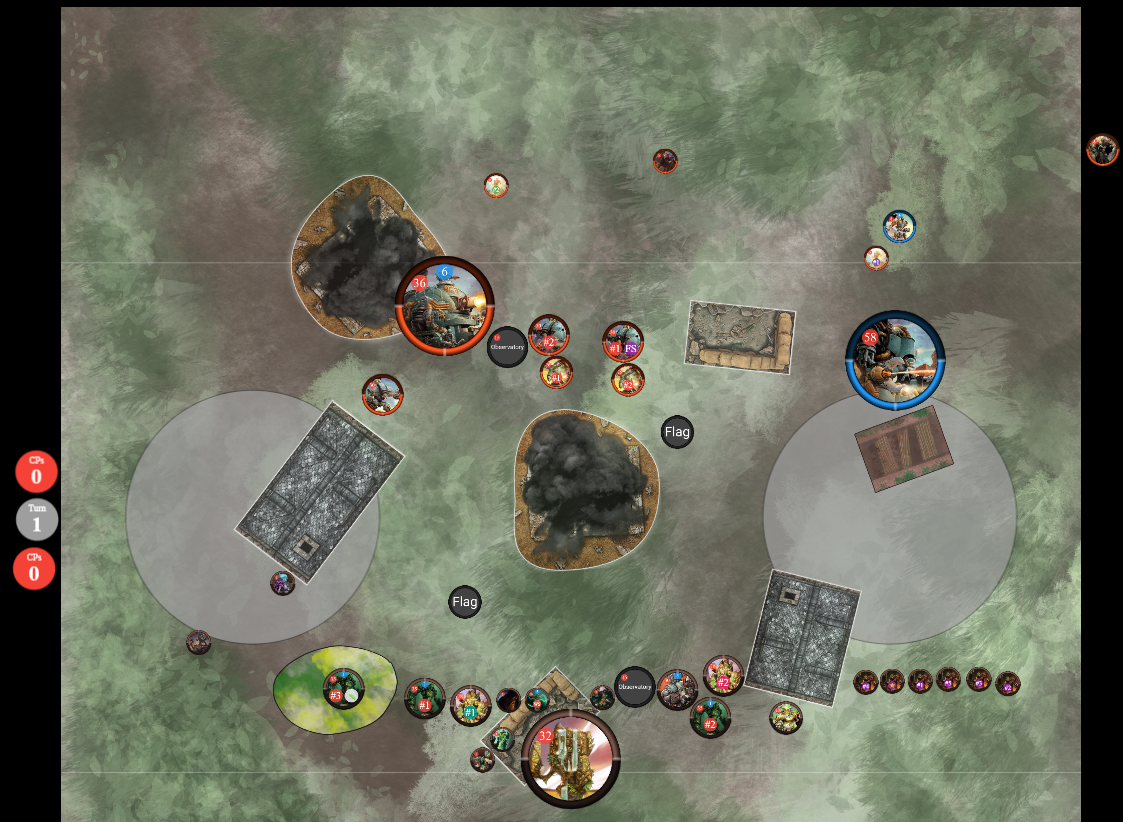 I misplay this turn, straight up. I'm not used to not having a pair of Railless Interceptors in my list, and it absolutely shows in how I deal with what's in front of me. Normally, this would be the point in the game at which I use my Feat. I believe that if I had done so, and potentially accepted a bit of damage on the Vulcan from the Slaughterhousers, I could have taken off one or two of the Woldwardens as well as both the Primal Archons, putting me in a considerably advantageous position even with Krueger2's Feat still on the table and the scenario being difficult for me to actually score on. However, what I instead did was make a completely fudged attempt at a turn - which I'm prepared to partly ascribe to this game beginning at 1am my time, and the amount of KM work I did that evening, but at the end of the day the error was mine and I made a clear choice to go against my gut instinct of the right play, which historically has never proven to be the right decision for me.

In short, what happens is that Mackay ends up in a relatively safe (in my opinion, anyway) position, but all that I accomplish is killing the two Primal Archons. I'm thus in a really, really rough position for attrition next turn, as while I pretty much own the right flank, I'm not going to be able to parlay that into an attrition counterpunch due to the Vulcan's relative isolation, and I'm probably going to lose a lot of models. I also have to let Harrison score his own Flag, due to my lack of contesting models, though my Trancer scores my own. 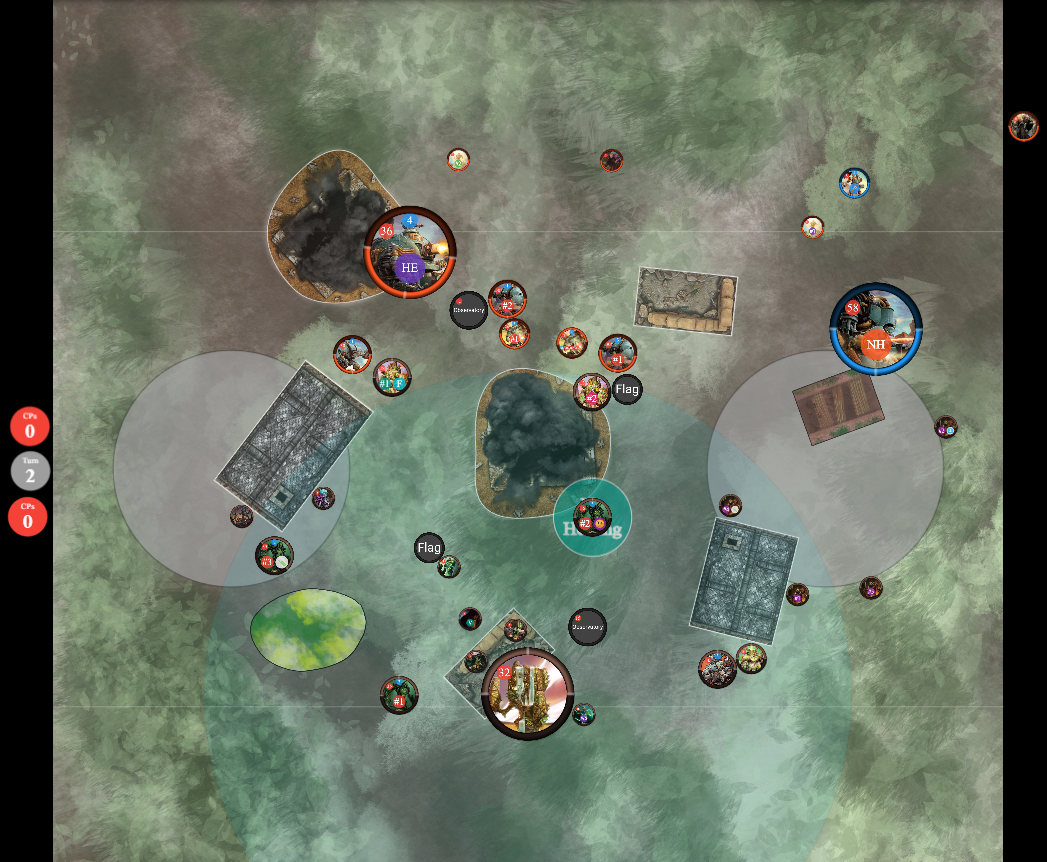 Harrison weighs the options, and instead of going for the attrition play that I might expect at this stage, he reckons he can assassinate me. While I feel this expectation to be unrealistic, I soon understand the roots of his thinking when he starts trying to measure two Woldwardens coming into me. This would absolutely have been a strong assassination, and even though the attrition was fairly dead to rights in his favour, I respect the efforts taken to practice setting up a complex assassination run. Unfortunately, due to the building, it's impossible to get both in, but the dice pan out in Harrison's favour and Mackay is unceremoniously flattened after some positioning setup. 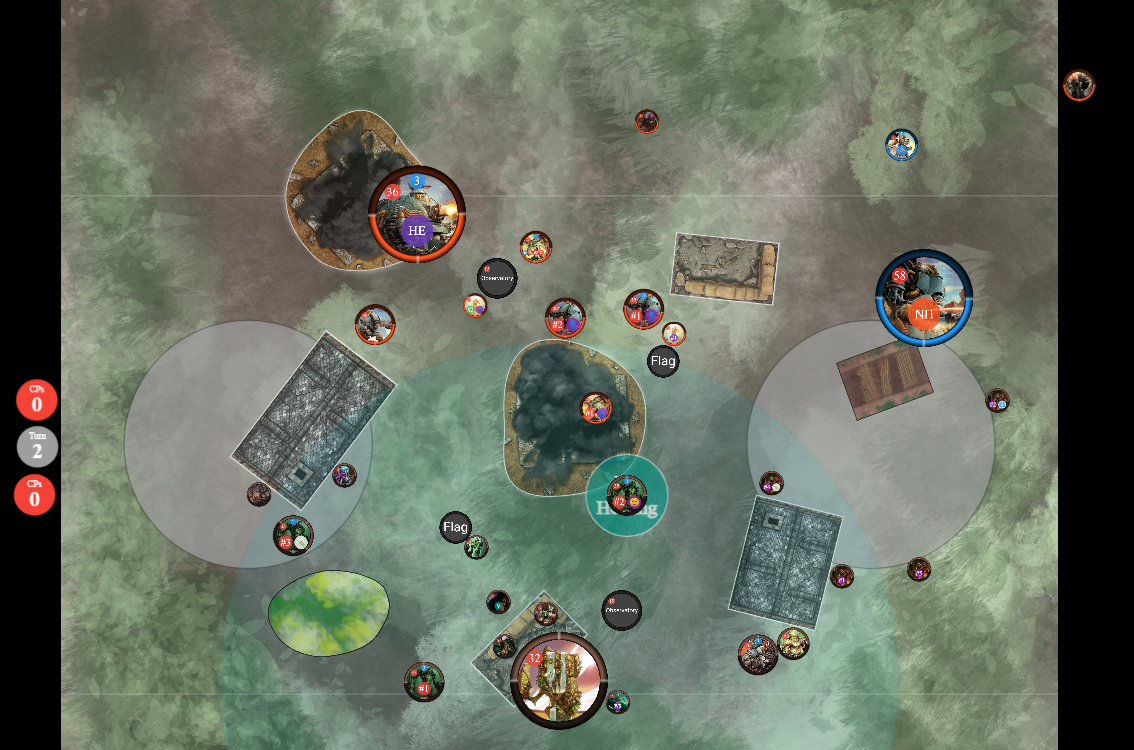 Harrison wins by Assassination in Turn 3A. Scenario score 2-1 to Harrison.

We had a really useful post-game discussion in which we cover a lot of topics, but chief among them were firstly the foregone conclusion of attrition, meaning that Harrison was in a position to control the game quite heavily due to my very significant error (which I'm not going to make again for a long time; these lessons stick with me and it's good to get a refresher on them from time to time to keep one humble), and secondly a suggested mild change to Harrison's list, which would be swapping out the Slaughterhousers and River Raider for a Bellows Crew and a unit of Valkyries. While the extra Shield Guards in a list with Windstorm seems counterintuitive, we ended up agreeing that not only would it have made this matchup even more unfavourable, being able to grab both circular zones would have been very significant in exerting scenario pressure, as I was given a free pass on having to contest my left side which at least mildly helped.

I believe that I've made an error in list construction here and am rightly being punished for it, but I want to ensure that the Vanguard and Suppressor get a fair chance to prove themselves in a range of matchups before I make a decision moving forward. As such, I'll stick with the same list for a bit, but I'll definitely be casting a critical eye on some of the pieces for future consideration.